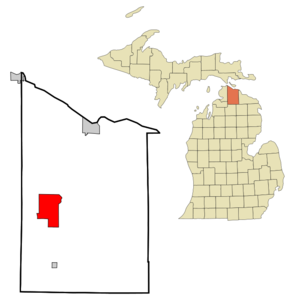 Indian River is an in Cheboygan County in the of . It is a (CDP) for statistical purposes and is not legally recognized as a municipality. The population was 2,008 at the 2000 census.

is included within the CDP and the park, which draws a large number of tourists each year, assists the local economy, part of which is reliant on the influx of summer travelers who take part in the watersports, camping facilities, and other attractions around Indian River.

Located on Burt Lake is the YMCA camp; Camp Al-Gon-Quian.

There were 929 households out of which 23.0% had children under the age of 18 living with them, 56.6% were married couples living together, 7.4% had a female householder with no husband present, and 33.9% were non-families. 29.9% of all households were made up of individuals and 14.3% had someone living alone who was 65 years of age or older. The average household size was 2.16 and the average family size was 2.65.