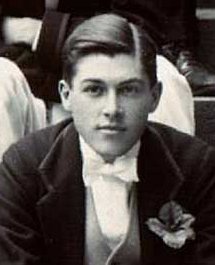 George Llewelyn Davies ( - ) was the eldest son of Arthur and . Along with his brothers, George was the inspiration for playwright 's characters of and the Lost Boys. The character of Mr. George Darling was named after him. He died in combat in .

Davies and his brother Jack met Barrie during their regular outings to , with their nurse Mary Hodgson. As the oldest (he was four years old when he met Barrie) he featured most prominently in the early storytelling and play adventures from which the writer drew ideas for Barrie's works around that time about young boys. The character of David in Barrie's 1901 book "" resembles him as a small boy, and used him as the model for that character in the illustrated reprint of the Peter Pan chapters of the book as "Peter Pan in Kensington Gardens". He and Jack (and to a lesser extent Peter) were featured in a photo storybook "The Boy Castaways" which Barrie made during a shared holiday at Barrie's Black Lake Cottage in 1901.

In the 1904 play "", the central character is roughly the same age that Davies was. Barrie reported taking some of the characterization of Peter and individual Lost Boys from things Davies and his younger brothers said or did. For example, in response to Barrie's oral tales about babies who died and went to live in , the boy reportedly exclaimed, "To die will be an awfully big adventure"; this became one of Peter Pan's most memorable lines.

Barrie financially supported Davies and his brothers following the death of their father (1907), and became their primary guardian following the death of their mother (1910). Davies remained very close with "Uncle Jim" as he grew up and went away to school, with the two exchanging letters regularly. His youngest brother Nico later described him (and their brother Michael) as "The Ones": the boys who meant the most to Barrie.

Davies attended , where he excelled at sports (especially ) and was elected to the elite social club Pop while still an underclassman. He later attended where he joined the Amateur Dramatic Club, following in the footsteps of both his uncle, actor and his dramatist guardian.

Following the UK's entry into , Davies and his brother Peter volunteered for service. He received a commission as a in the , and served in the trenches in . He died of a gunshot to the head at the age of 21. As yet unmarried, the young George Llewelyn Davies left no children.

In the 1978 "The Lost Boys", he was portrayed at various ages by (son of actor , who portrayed Barrie), Paul Holmes, , Mark Benson, and .