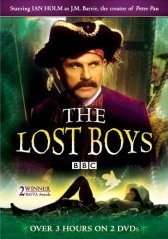 "The Lost Boys" is an award-winning 1978 produced by the , written by , and directed by . It is about the relationship between creator and the .

Novelist Jim Barrie () meets the two oldest Davies boys, George and Jack, during outings with their nurse Mary Hodgson () in . He entertains them, especially George, with his matter-of-fact fantasy stories, some of which include a magical toddler who shares a name with their infant brother Peter.

Jim and his wife Mary () meet the boys' parents Sylvia () and Arthur () at a dinner party, and he forms a friendship with the mother and her sons. The Barries and Davies socialize, but Mary and Arthur each quietly resent Jim: for neglecting her, and for imposing into his family. Sylvia and Arthur have two more sons, Michael and Nico, whom Jim adds to his circle of young friends. He writes a play based on them: "", which is a great success for him and his producer friend ().

Arthur is struck by a disfiguring and ultimately fatal cancer. Jim steps in to support the Davies family with some of his ample income from "Peter Pan", attempting to be a friend to Arthur in his final days but alienating Jack with his interference. With George away at school, sensitive Michael becomes the center of "Uncle Jim"'s attention. Tired of Jim's indifference toward her, Mary falls in love and has an affair with his young colleague (). She refuses to end it, and Jim reluctantly gives her a divorce. Meanwhile, Sylvia has fallen ill with cancer, and dies a few years after her husband. Jim claims they were engaged.

The boys continue to live in the Davies' London house with Mary Hodgson, and Uncle Jim serves as their guardian, all following Sylvia's wishes. As the years go by, George becomes an adult confidant of Uncle Jim, while Jack joins the Navy. World War I breaks out, and George and Peter volunteer for the Army; George is killed in combat. Jack returns to London to marry, and Uncle Jim gives the couple the Davies' house, moving Michael and Nico into his flat with him; this prompts Mary Hodgson to resign. Peter returns from the War with a morbid outlook on death. Michael spends increasing time with his school friends and chafes against Uncle Jim's wish to keep him close; he drowns just short of his 21st birthday. In later years with even Nico grown, Sir James endures loneliness, taking some measure of enjoyment with the young son of his new secretary Cynthia Asquist ().

Writer had been hired to work on a musical adaptation of "Peter Pan" starring and , and "justified [his] presence on the set by becoming the resident Barrie expert." [Birkin, Andrew. "J. M. Barrie and the Lost Boys", Yale University Press, 2003.] His proposal to the BBC was based on his notes from that research. The script adheres closely to the known facts and timeline of the Barries' and the Davies' lives, sometimes using surviving correspondence between the subjects as the basis for dialog, and mentioning various events and other people in their lives in passing.