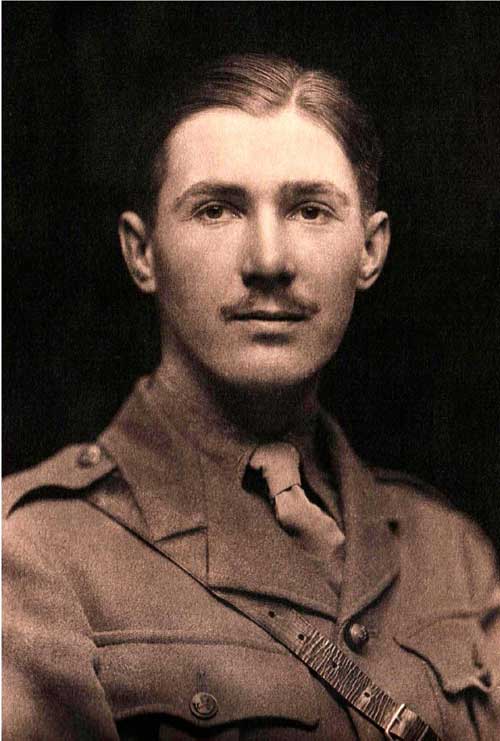 Peter Llewelyn Davies MC ( &ndash; , ) was the middle of five sons of Arthur and , one of the befriended by . Barrie publicly identified him as the source of the name for the title character in his famous play "", and his public identification as the "original Peter Pan" plagued him throughout his life, which ended in suicide.

Davies was an infant when Barrie befriended his older brothers George and Jack during outings in , with their nurse Mary Hodgson and him in a pram. Barrie's original description of in "" (1902) was as a new-born who had escaped to Kensington Gardens. However, according to family accounts, his brothers George and Michael served as the primary models for the character as he appeared in the famed stage play (1904) and later novel (1911), as a pre-adolescent boy.

Barrie became guardian of Davies and his brothers George, Jack, Michael, and Nico following the separate deaths of their father (1907) and mother (1910). Davies, like his brothers (apart from Jack), attended .

In 1917, while still in the military, Davies met and began to court Vera Willoughby, a married woman in her late 30s with a daughter. He stayed with her when on leave, which scandalized Barrie and caused a rift between the two. His former nurse and mother figure Mary Hodgson disapproved strongly as well. The relationship continued at least through the end of his military service in 1919.

His brother, , drowned at the age of 20 while at in 1921. Michael's best friend, Rupert Buxton, drowned with him, and the circumstances have since led some to speculate that they may have been lovers in a . [http://www.worldcollectorsnet.com/news/newstories/news551.html]

He grew to dislike having his name associated with what he called "that terrible masterpiece". He was also excluded from Barrie's will — instead of his fortune going to the surviving brothers upon his death in 1937, most of it went to his secretary Cynthia Asquith, and in 1929, Barrie had given the copyright to the Peter Pan works to for Children in London. Some have speculated that this drove Davies to drink &mdash; he eventually became an alcoholic. Davies' son Ruthven later told an interviewer:

"My father had mixed feelings about the whole business of Peter Pan. He accepted that Barrie considered that he was the inspiration for Peter Pan and it was only reasonable that my father should inherit everything from Barrie. That was my father's expectation. It would have recompensed him for the notoriety he had experienced since being linked with Peter Pan — something he hated."

On 5 April 1960, after lingering at the bar of the Royal Court Hotel, 63-year-old Davies walked to nearby and threw himself under a train as it was pulling into the station. A coroner's jury ruled he had killed himself "while the balance of his mind was disturbed". At the time of his suicide, he had been editing family papers and letters, assembling them into a collection he called the "Morgue". He had more or less reached the documents having to do with his brother Michael's possible suicide. Other possible contributing factors in his suicide were ill health (he was suffering from ), as well as the knowledge that his wife and all three of their sons had inherited the usually fatal . Newspaper reports of his death referred to him in their headlines as "Peter Pan".

In the 2004 film "" he was portrayed as a child by ; Highmore won a award nomination for his performance.

* [http://jmbarrie.co.uk/ Website with information on Barrie and the Llewelyn Davies family]