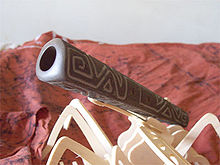 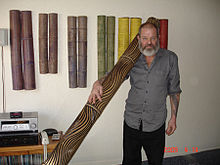 A chillum, or chilam, is a straight conical pipe with end-to-end channel, traditionally made of clay and used since at least the 18th century.[1] by wandering Hindu monks, known as sadhus[2] in India. More recently, it has also seen use in sacraments by Rastafarians[3][4] in Jamaica, and by recreational drug users to smoke cannabis, tobacco, or opiates.

According to Alfred Dunhill, Africans have long employed chillum-style pipes for smoking hemp and later tobacco. Gourds and various horns were often employed while conical bowls were common in Uganda. One of the more famous pipes is an ivory cone pipe once belonging to "Waganda" monarch King Mtesa.[5]

Since the 1960s the embellished bamboo chillum has become an American folk art form. These pipes are hand made and often sold by the artists on street corners in places like the Haight-Ashbury district of San Francisco and the Greenwich Village area of New York City. As designs these contemporary smoking pipes recall traditional decorated bamboo pipes from Borneo,[5] however, the American carved bamboo design often employs a brass lighting fixture for a bowl. Since the 1970s, street artist Darrel "Pipeman" Mortimer of San Francisco has made nearly 10,000 such pipes, each signed, numbered and sold personally.[6]

In "reasoning sessions'" and grounations, the ritual chillum used is made of a cow's horn or conical wood piece, fitted with a long drawtube giving the smoke time to cool before inhalation. When using the pipe, a user draws slowly to control temperature, improving the yield of cannabinoids. A wire screen embedded in the opening permits using fine-sifted herb material, from which cannabinoids vaporize out readily, without drawing small particles down inside the channel.

A bong-like chillum equipped with a water filtration chamber is sometimes referred to as a chalice, based on a quote from the Biblical book of Deuteronomy.[7] Thanks and praises are offered to Jah before smoking the chillum.[8]