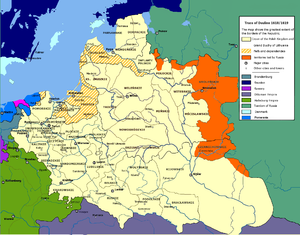 Truce of Deulino (also known as Peace or Treaty of Dywilino) was signed on 11 December 1618 and took effect on 4 January 1619.[1] It concluded the Polish–Muscovite War (1605–1618) between the Polish–Lithuanian Commonwealth and the Tsardom of Russia.

The agreement marked the greatest geographical expansion of the Commonwealth,[2] which lasted until the Commonwealth conceded the loss of Livonia in 1629. The Commonwealth gained control over the Smolensk and Chernihiv Voivodeships.[2] The truce was set to expire in 14.5 years.[3] The parties exchanged prisoners, including Filaret Romanov, Patriarch of Moscow.[3]

Władysław IV, son of Commonwealth king Sigismund III Vasa, refused to relinquish his claim to the Moscow throne.[4] Therefore in 1632, when the Truce of Deulino expired and Sigismund III died,[2] and hostilities were immediately resumed in the course of a conflict known as the Smolensk War, which ended in the Treaty of Polanów in 1635.[1]