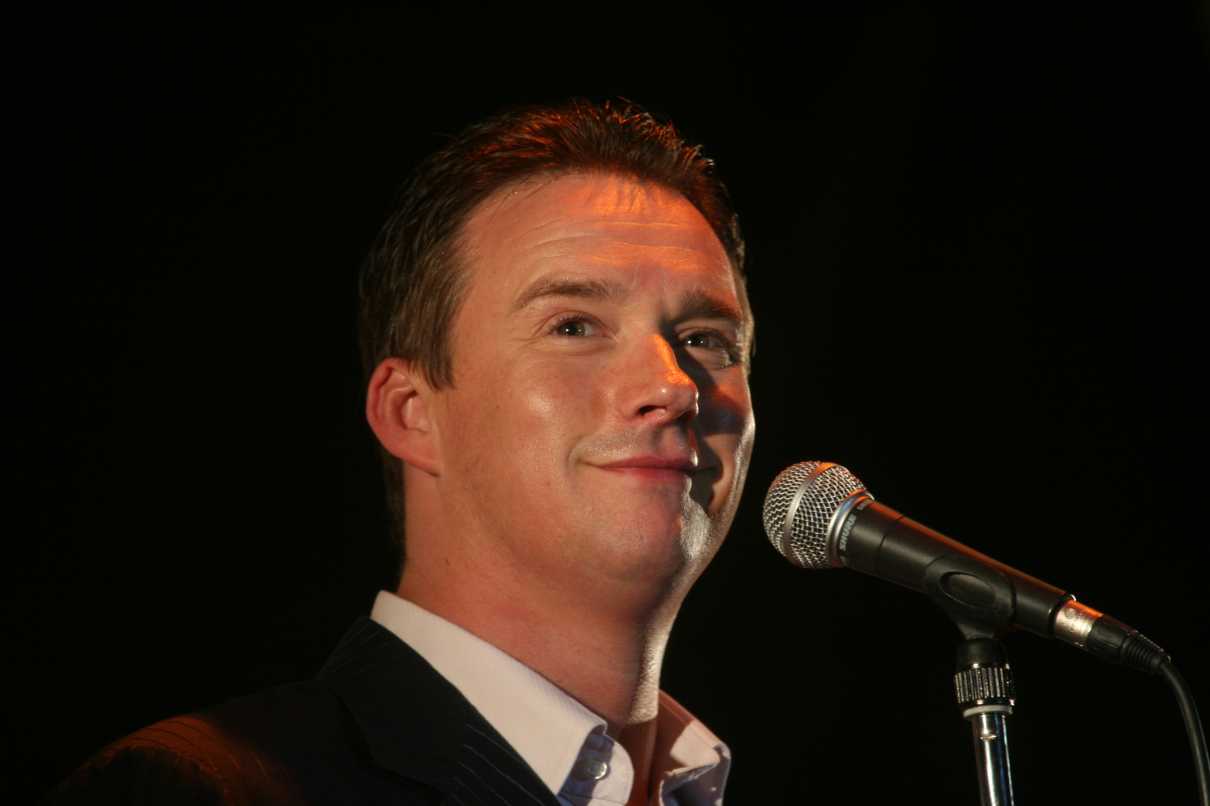 Russell Watson (born ) is an English who has released singles and s of both operatic-style and pop songs. The self-styled "People's Tenor" had been singing since he was a child, and became known after performing at a . He came to attention in 1999 when he sang the UK's national anthem at the Rugby League Challenge Cup Final at , "Barcelona" at the last match of the Premiership season between Manchester United and Tottenham Hotspur at Old Trafford and a full set of songs at the final of the in between Manchester United and .

Watson's debut album entitled "The Voice" was released in May 2001; four others followed. However, an album planned for November 2006 was delayed due to the removal of a benign brain tumour. This album, entitled "That's Life", was eventually released on 5 March 2007.

On 24 October 2007, it was discovered that there had been a regrowth of his brain tumour and bleeding into his brain. He underwent emergency surgery and was discharged from hospital on 31 October. He underwent an extensive rehabilitation programme, including radiotherapy. His sixth studio album, "Outside In", was released on 26 November 2007.

Watson was born on in , , [ is now in the of .] . Although he had been singing since he was a child, he never sought a career as a professional . He left school with no GCSEs, and started earning £90 a week on a

The turning point in his career came at an engagement at Wigan Road one night, when the secretary suggested he try singing "Nessun Dorma" from Puccini's "". Although Russell Watson was not a classically-trained singer he continued to perform the , and was encouraged to try other classical pieces.

In 1998 he was invited to sing at Old Trafford during the interval at a memorial football match for the , a huge privilege for a lifelong Manchester United fan. However, his appearance was cancelled at the last minute when player requested that sing instead.

In 1999 he sang the UK's national anthem at the Rugby League Challenge Cup Final at , then finally got to sing at Old Trafford before the last match of the Premiership season between Manchester United and Tottenham Hotspur. After the game, when his team had won the league championship, he returned on to the pitch to sing the and song "Barcelona", during which he tore off his dinner jacket to reveal a Manchester United shirt.

This appearance sealed his success, and only a week later he was invited to sing a full set at the final of the in between United and , duetting with Montserrat Caballé.

Watson's debut album entitled "The Voice" followed in May 2001. A mixture of operatic s and covers of pop songs, it topped the UK Classical Chart and eventually reached number five in the . Later, when released in the , the album took the number one spot and made history as the first time a British artist had held both the US and UK classical number one. The album contained perhaps Watson's most unusual collaboration to date, with former singer who lent his vocals to the and song "Barcelona". The album also featured a duet with Cleo of Cleopatra on the song "Someone Like You". Cleo later duetted with Russell again on his third album "Reprise" on the song "The Best That Love Can Be".

Prior to the formation of , Watson was asked by Slash (former guitarist of and currently in Velvet Revolver) whether he would be their singer. Watson turned down this opportunity, at least for the time being, to concentrate on his solo career. [citation|title=Roses – Slash begged British tenor to be in Velvet Revolver|url=http://www.contactmusic.com/new/xmlfeed.nsf/mndwebpages/slash%20begged%20british%20tenor%20to%20be%20in%20velvet%20revolver_26_04_2006|publisher=|date=26 April 2006|accessdate=2008-10-07.]

In late 2002, Watson released the single "Nothing Sacred – A Song for Kirsty" to raise money for the Francis House children's hospice in , Manchester. The campaign to raise £5 million was fronted by , a seven-year-old girl with a serious heart defect. The song reached number 17 in the . [citation|title=Single to boost Kirsty appeal|url=http://news.bbc.co.uk/2/hi/uk_news/england/2393369.stm|publisher=|date=3 November 2002.]

In 2003, Ian Boasman, a businessman from , , and Keith Chadwick, an entrepreneur, launched a High Court action through Union Music Ltd. (a company set up by Boasman) and a related firm Arias Ltd., claiming that they had transformed Watson from a cabaret club entertainer into an internationally-famous star and that they had been wronged when Watson signed with and cut them out of the deal. Union Music and Arias sought 51% of Watson's earnings since he joined them, as well as the return of cash they said was invested in Watson early in his career. The plaintiffs' solicitors, Wacks Caller, estimated legal costs at that stage at £750,000. [citation|title=Press information: Opera singer and multi-millionaire Russell Watson is facing a legal battle|url=http://www.wackscaller.com/pages/news/Opera_Singer.html|publisher=Wacks Caller|date=May 2003|accessdate=2007-10-28.]

The plaintiffs claimed that Boasman spotted Watson singing at the Princess Diana Memorial Hall in Manchester in spring 1998 and agreed to be his manager. Boasman and Chadwick then set up Union Music. A separate firm, Arias, was incorporated, with Watson holding a directorship and 49% shareholding and Union Music holding the remaining 51%. Watson was given a wage of £3,000 a month, an car, and cash for dental work and a gym membership.

Watson countersued, claiming that advice that the firms gave had cost him money. The outcome of the case is not currently known.

In addition to his recording work, Watson played Parson Nathaniel in the stage adaptation of "" which toured the UK in early 2006. In the same year, he also took part in the reality TV show "". The programme involved eight couples, including and Watson, competing in a duet-singing showdown, complete with a live band, a panel of judges and viewer voting, to see who would be crowned champions. A wide array of music was performed, from country and western to rock. The scores each week were tallied from both a judging vote (the judges were Lulu, , and ) and a public phone-in vote. Watson, a late arrival to the competition replacing Reeves' original partner who had pulled out, took the crown despite the low scores awarded by the judges to their performances. Following the competition Reeves and Watson released a victory single, "Can't Help Falling In Love". Russell Watson was scheduled to defend his title in the 2007 series with a new celebrity partner, , but had to withdraw at the last minute due to serious health problems.

In 2005, Watson began having s, which he described as "like a knife being pressed into the bridge of my nose". He consulted a specialist who told him there was nothing to worry about as he was suffering from stress and should find ways of relaxing. When his began to be affected in late 2006, he visited another specialist who also said he was suffering from stress. Watson told him, "The only thing that's stressing me is this pain in my head."

In September 2006, Watson flew to , , to record his album "That's Life". On the flight, he told his producer that he was experiencing terrible pressure inside his skull. When they landed, his producer suggested a game of tennis to clear his head. Watson could not see the ball at all. After a visit to the and an MRI scan, he was advised that he had a developing , a type of brain tumour, which was the size of two golf balls. According to Watson, "Since an early age I've had an in-built premonition, a vision that I wouldn't make 40. For the previous seven years I'd have a recurring nightmare in which my head exploded. And here I was with a brain tumour on the eve of my 40th birthday; I thought, 'This is it, I was right, I knew it'." Watson recalled that the tumours were "like a figure of eight, one filling the frontal cavity of my skull, the other forced through into the top of my nose." He stayed in Los Angeles for two days and continued recording his album while tests confirmed whether the tumour was or not – it turned out to be .

Watson then returned to the UK, and had a five-hour emergency operation to remove the eight-centimetre lump at in , , on Monday, 24 September 2006. As the tumour was pressing against his , the surgeon removed the tumour through his nose. [citation|title=Brain surgery for Russell Watson|url=http://news.bbc.co.uk/1/hi/entertainment/5391544.stm|publisher=|date=29 September 2006; citation|title=Russ on mend after op success|url=http://www.thesun.co.uk/article/0,,2-2006450491,00.html|newspaper=|date=30 September 2006. See also citation|author=Catriona Davies|title=Tumour put singer in danger of going blind|url=http://www.telegraph.co.uk/news/main.jhtml?xml=/news/2006/09/30/nrussell30.xml|newspaper=|date=30 September 2006.]

After the operation, Watson could barely walk, and the tumour had affected his which controls levels: "My mood swings went from ecstatic to suicidal. I remember one night standing on the balcony, full of dark thoughts and self-pity, thinking 'God, this is f**king terrible, why me?' I went back to bed, couldn't sleep, got up again. I thought I'd had enough. If it hadn't been for the girls [his daughters] ..." His energy levels were very low and he did not leave his house for two months: "I couldn't deal with more than one person at a time or with multitasking and I cried easily." Watson was readmitted to hospital in Manchester for tests on 6 October 2006 after complaining of dizziness, headaches and blurred vision. [citation|title=Russell Watson back in hospital|url=http://news.bbc.co.uk/1/hi/entertainment/5413194.stm|publisher=|date=6 October 2006.]

Upon recovering, Watson returned to the recording studio to finish his album "That's Life". Originally due out in November 2006, it was subsequently released on 5 March 2007. On the advice of his doctors, his latest UK tour, which had been due to start in late October 2006, was also postponed until March 2007 to coincide with the album release. [citation|title=Singer Watson postpones UK tour|url=http://news.bbc.co.uk/1/hi/entertainment/6102374.stm|publisher=|date=31 October 2006.] The rescheduled tour met with huge approval throughout the country, with night after night of standing ovations to a visibly-moved Watson. On 19 May 2007, Watson sang the UK's National Anthem at the 2007 FA Cup Final.

Whilst in the middle of the studio recording of his album "Outside In" on 24 October 2007 Watson suddenly became incapacitated, with multiple symptoms including a dramatic deterioration of vision. An MRI scan showed he had a regrowth of his tumour with bleeding into his brain. He underwent emergency surgery to remove the tumour at the Alexandra Hospital in , and was for a while in critical condition in the hospital's Intensive Therapy Unit. [citation|title=Watson 'critical' after surgery|url=http://news.bbc.co.uk/1/hi/entertainment/7061320.stm|publisher=|date=25 October 2007; citation|author=Nigel Reynolds|title=Russell Watson 'critical' after brain surgery|url=http://www.telegraph.co.uk/news/main.jhtml?xml=/news/2007/10/25/nwatson325.xml|newspaper=|date=25 October 2007; citation|title=Singer Watson undergoes emergency brain surgery|url=http://www.guardian.co.uk/uk_news/story/0,,2198669,00.html|newspaper=|date=25 October 2007; citation|author=Veronica Schmidt|title=Russell Watson in critical condition after brain surgery|url=http://entertainment.timesonline.co.uk/tol/arts_and_entertainment/stage/opera/article2737831.ece|newspaper=|date=25 October 2007.] On 26 October a hospital spokesman said that Watson was "recovering well" from his surgery and was in a stable condition, although the recovery process might be "a long haul". [citation|title=Russell Watson 'recovering well'|url=http://news.bbc.co.uk/1/hi/entertainment/7063587.stm|publisher=|date=26 October 2007. See also citation|author=Duncan Hooper|title=Russell Watson in intensive care after surgery|url=http://www.telegraph.co.uk/news/main.jhtml?xml=/news/2007/10/26/nwatson226.xml|newspaper=|date=26 October 2007; citation|author=Fred Attewill|title=Watson 'on good form' after brain surgery|url=http://www.guardian.co.uk/uk_news/story/0,,2199934,00.html|newspaper=|date=26 October 2007.] Watson was discharged from hospital on 31 October, telling reporters "I'm just happy to be alive and be with my children at the moment", and paying tribute to messages of support from his fans, calling them "amazing". A statement from Watson's management added: "We would like to pass on Russell's heartfelt thanks for the overwhelming amount of messages and gifts from his fans." Watson later underwent an extensive rehabilitation programme including radiotherapy. [citation|title=Watson discharged from hospital|url=http://news.bbc.co.uk/1/hi/entertainment/7070144.stm|publisher=|date=31 October 2007.] He released his sixth studio album, "Outside In", on 26 November 2007. [Release date obtained from [http://www.amazon.co.uk Amazon.co.uk] . Retrieved on 3 June 2008.]

Watson appeared as a judge on the "", which was broadcast on beginning 5 July 2008. [citation|title=Russell Watson|url=http://www.bbc.co.uk/lastchoirstanding/about/russell_biog.shtml|publisher="", |year=2008|accessdate=2008-07-14.]

Watson has two daughters: Rebecca and Hannah. [According to a February 2007 article in "" ("times2"), Rebecca was aged 12 years and Hannah six years in 2007: see citation|author=Jane Wheatley|title='You have a brain tumour,' the doctor told me. 'Quite a big one'|url=http://www.timesonline.co.uk/tol/life_and_style/health/features/article1399498.ece|newspaper= (times2)|date=19 February 2007.] He is divorced, having separated from his former wife soon after the release of his first album. Watson has been reported as saying: "It [his first brain tumour] changed my priorities. Made me appreciate the importance of relationships, of friends and family and, most of all, my two daughters. My fear for them if I died – that was the worst part."