It received significant scientific attention following the seismic detection of a submarine eruption at the volcano in January 1998.[3] Subsequent cruises in February revealed the lava has erupted from a 9 km (6 mi) long fissure on the south end of Axial's main caldera.[1] Lava flows partially buried a seismometer and pressure gauge and mooring line on the volcano, which had been earlier deployed in 1997.[3] The volcano erupted again in 2011.[4] 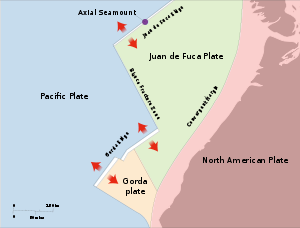 Axial Seamount is the youngest volcano and current eruptive center of the Cobb-Eickelberg Seamount chain, a chain of seamounts that terminates south of Alaska.[5] Axial lies where the chain intersects with the Juan de Fuca Ridge,[6] approximately 480 km (300 mi) west of Oregon. It is a product of the Cobb hotspot, but now sits on an ocean spreading center between the Juan de Fuca Plate and the North American Plate,[7] offset by the Blanco Fracture Zone to the south and a ridge-built triple junction to the north. This position that is not yet entirely understood.[6][5]

It is believed that the chain, formed over millions of years by the now-inactive Cobb hotspot, is older than the mid-ocean ridge it bisects.[6] Between 200,000 and 700,000 years ago, the hotspot was encroached by the tectonic spreading center,[8] displacing it by as much as 20 km (12 mi) and building up the 500 km (311 mi) long Juan de Fuca Ridge. At least 7 spreading centers have been recognized,[6] and plate measurements near Axial show that the ridge is separating at a rate of 6 cm (2 in) per year,[5] producing a complex system of oceanic basins and ridges.[6] However some scientists have questioned this theory, pointing out that the high density of the chain's seamounts, which often overlap, runs counter to the long trail a hotspot would normally produce. Although the exact nature of Axial Seamount remains unknown, its polysemous origins makes it one of the most geologically interesting features in the North Pacific.[5] 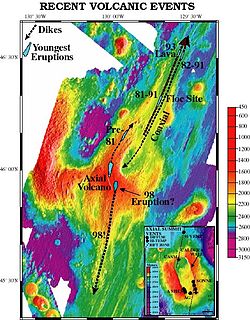 Full bathymetry of Axial Seamount, with a close-up of its unusual caldera. Part of Brown Bear Seamount can be seen on the left. 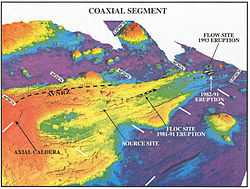 Close up of the northern rift zone.

Axial Seamount is the most active volcanic site in the North Pacific. Study of magnetic delineations along the seamount have modeled the ridge's history up to 30 million years ago, and shown that growth has progressed mostly in the north, with some southward progression dating back to 3.5 million years. The base of Axial Seamount is a long, low-lying plateau, and the eastern part of the seamount is defined by a series of linear scarps. Axial Seamount has two major volcanic rifts extending approximately 50 km (31 mi) north and south its main summit, as well as several much smaller, ill-defined ones aligned in a roughly similar pattern. Basins around the volcano further its irregularity, making it unusually complex, as most seamounts of roughly the same size are circular or flattened in shape.[6]

Axial Seamount's summit is marked by an unusual rectangular caldera, 3 × 8 km (2 × 5 mi) in area,[3] ~3° in slope,[6] and breached on the southeast side. The area is offset by the two rift zones and defined on three sides by boundary faults up to 150 m (492 ft) deep.[3] The caldera is roughly 50 m (164 ft) deeper at the north side then it is in the south. Flows within the caldera consist mostly of sheet flows pocketed by lava ponds and pit craters. Less common are pillow lavas; their arrangement along the caldera walls suggests that they were an important component in the volcano's early growth. There are several dome-like structures within the caldera with heights of 100–300 m (328–984 ft). There are several small craters within the region, the largest of which, nicknamed the D.D. Cone, is 2 km (1 mi) in diameter and 100 m (328 ft) in relief. However, most of the features do not range over 30 to 40 m (98 to 131 ft) deep and 1 km (1 mi) across.[6]

The northern rift zone of Axial Seamount is a 5 km (3 mi) long ridge running 10 to 20 degrees northeast of the main caldera. The rift is pocketed by multiple fissures, 100–200 m (328–656 ft) in length, as far as 7 km (4 mi) from Axial Volcano's center, and reaching up to 400 m (1,312 ft) long and 20 m (66 ft) deep. The area contains high amounts of volcanic glass; a major eruption is still visible in the form of an elongated glassy lava flow extending off the caldera wall, east of the main rift line. Dives in 1983 found extensive low-temperature venting at the northern half of the fissure. The shorter, newer southern rift zone consists of a topographically plunging rift, surrounding by subtle, discontinuous faults. Camera tows along the southern flank reveal that the area is built of delineated sheet flows, small lava ponds, and lava channels.[6]

The youngest of the flows on Axial Seamount are aligned along the two rift zones, followed by flows inside the summit caldera; the oldest appear to originate from directly around the caldera, where most of the basalt is completely covered in accumulated sediment. This suggests a bilateral growth pattern, a trend also found in Hawaiʻian volcanics and other well-known seamounts, for instance Jasper Seamount.[6]

Axial Seamount's growth has intersected the growth of many of the smaller seamounts around it. The largest of these is Brown Bear Seamount, to which it is connected[8] by a narrow ridge running roughly perpendicular to its western caldera wall. However, little evidence of interactions between the two seamounts has been found.[6] On the other hand, Axial Seamount's southern rift zone bisects one of the Vance Seamounts by as much as 30 km (19 mi), creating a zone of intense fissuring at the northern edge of the smaller volcano. Interactions with Cobb Seamount to the north are more complex, forming an unusual "bent spreading center." In addition there are four smaller structures directly east, north, and south of Axial.[5]

Distribution of earthquake activity in the years prior to the 1998 eruption. Red dots represent earthquake swarms.

The first volcanoes along the Juan de Fuca ridge, including Axial Seamount, were detected in the 1970s by satellite altimetry.[7][5] Axial Seamount's proximity to the western coast and shallow depth make it one of the most easily accessible seamounts in the world, and its unique geological setting and active state also makes it one of the most interesting, rivaling Davidson Seamount to the south in scientific interest.[5]

The first bathymetry of the seamount was compiled by the NOAAS Surveyor in 1981, as part of SeaBeam trials in the North Pacific. The survey was specifically meant to find and link seafloor hydrothermal activity to geomorphic features. Four areas of increased temperature concentration, indicative of hydrothermal activity, were found, and the then-unnamed Axial Seamount was among them. Submersible dives with Pisces IV and DSV Alvin in 1983 and 1984 discovered the first active black smoker vents in the north Pacific.[2] Soon after Axial Seamount was named for its central position on the intersection of the Cobb-Eickelberg Seamount chain and Juan de Fuca Ridge.[6] That same year, the National Oceanic and Atmospheric Administration (NOAA) founded its VENTS program, providing impetus for studying the volcano more closely.[6]

Between 1987 and 1992, a variety of pressure sensors, tilt sensors, temperature probes, and seismometers were dropped dropped on the volcano in what came to be known as the Volcanic Systems Moninters (VSN).[9] Further bathymetries by the NOAAS Discoverer in 1991 and RV Sonne in 1996 detailed the seamount further,[10] making it one of the best known features in the North Pacific.[6] Also in 1996, the New Millenium Observatory (NeMO) was established on Axial Seamount, to study volcanic perturbations and the effect they have on hydrothermal communities.[2]

The 1998 eruption of Axial Seamount was preceded by several large earthquake swarms, common indicators of volcanic activity. The swarms correlated to magma movements in the volcano; bottom pressure recorders deployed on the volcano between 1987 and 1992 recorded five instances of deflation in the summit surface (caused by lava movement), ranging from 3 to 10 cm (1 to 4 in). In 1991, the National Oceanic and Atmospheric Administration (NOAA) was granted access to the United States Navy's SOSUS system, a chain of submerged hydrophones in the North Pacific originally used by the Navy to detect Russian submarines during the Cold War. Since 1993, the NOAA has maintained a real-time monitoring system that alerts the organization whenever an event occurs. The hydrophones are able to detect even very small earthquakes (~ magnitude 1.8) by listening for the acoustic waves generated by T-waves. These waves can propagate over large distances with minimal loss in power, making them an ideal way to record otherwise unnoticeable submarine earthquakes; over the course of the eruption, only 3 earthquakes were strong enough to register on land-based systems. However, they cannot interpret earthquake depth or what caused them.[9]

Between 1991 and 1996 Axial Seamount experienced a single earthquake swarm of over 50 events. Between May and November of 1997 this activity increased markedly, with SOSUS recording 5 such swarms, culminating with a massive 11-day, 8247-quake event around the time of the eruption, in January of 1998.[9] The seismicity began at the summit, but within 6 hours had begun to migrate south as well; by 29 November 2010 the swarm had moved south by 50 kilometers (31 mi).[10] This coincided with lava release along the summit and southern flank. The seamount remained absolutely quiet thereafter, suggesting the completion of an eruptive cycle at the volcano. In all, 9055 earthquakes were detected, and 1669 were strong enough to be located. Earthquake activity was concentrated around the summit and southern rift zones, with the majority of events centered inside the summit caldera; temperature probes and pressure recorders in the caldera recorded an average 0.6° C increase and 3.3 m (11 ft) height deflation, respectively, during the event.[9] This close monitoring gives the 1998 eruption the distinction of being the only submarine eruption ever observed in situ.[2]

The first confirmation of the eruption came in January through February 1998, when lines cast to measure water conditions in the area came up with unusual results. In May, a dedicated bathymetric survey of the seamount showed topographical changes along the volcano's southern flank, which estimated the thickest flows to 13 m (43 ft). In July DSV Alvin made several dives on the seamount's summit caldera, followed in August through September by an extensive observation and collection program using ROV ROPOS, confirming the bathymetric estimates. A sheet flow more than 3 km (2 mi) long and 500 to 800 m (1,640 to 2,625 ft) wide was produced from Axial Seamount's upper southern flank, on the site of what was formerly an active geothermal field. The southern flows were in an area marked by a difference between older sediments and newer, glassier rock, and the maximum ridge generated by the eruption, at the crest of the southern flow, was 13 m (40 ft) high. The total eruptive volume was roughly 18,000–76,000 km3 (4,000–18,000 cu mi).[10]

Axial Seamount erupted again in April 2011, fulfilling a coarse prediction made five years earlier.[4] The eruption prediction was made by Bill Chadwick, an Oregon State University geologist, and Scott Nooner, a geophysicist at Columbia University's Lamont-Doherty Earth Observatory in a paper they published in the Journal of Volcanology and Geothermal Research. 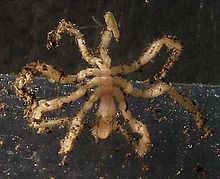 Camera tows and sumersible dives in the 1980s and 1990s revealed Axial Seamount as an active venting site with a vibrant range of biologal life,[10] including the only known black smoker in the northwest Pacific.[2]