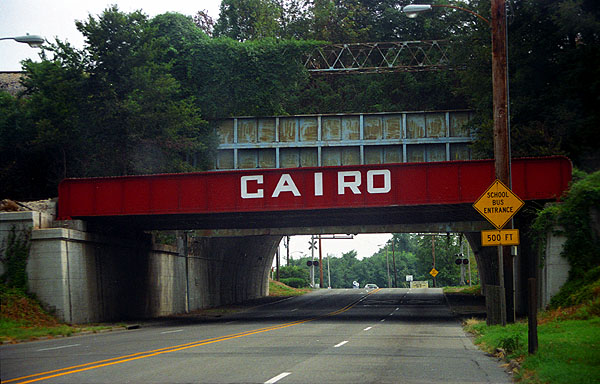 Cairo is a city in Alexander County, in the . The population was 3,632 at the 2000 census. It is the of Alexander County. The city's name is /ˈkeɪɹoʊ/, (Kay-row) pronounced differently from the English name for the capital city of Egypt.

It is part of the Cape Girardeau&ndash;Jackson, MO-IL Micropolitan Statistical Area.

Cairo was founded by the Cairo City & Canal Company in 1837, and incorporated as a in 1858. For 15 years the town grew slowly, but the sale of lots (commencing in 1853), and the completion of the , attracted settlers. By 1860, the population exceeded 2,000. It was an important port in the 19th century, with its own designed by , the Supervising Architect during Reconstruction. One of only 7 of his Victorian structures remaining, it has since been converted into a museum.

During the Civil War, Cairo was a strategically important supply base and training center for the Union army. For several months both General Grant and Admiral Foote had headquarters here. The town has numerous fine examples of prosperous 19th and early 20th architecture, including the Italianate "Magnolia Manor" and Second Empire "Riverlore Mansion". Much of the city, even in some areas of decay, is listed on the .

With the decline in river trade, like many other river cities, the population of Cairo has declined from a 1920 high of 15,203 to 3,632 in 2000. There is a movement to stop this gradual abandonment, restore Cairo's architectural landmarks, develop tourism focusing on its history, and bring new opportunities back to the community.

Cairo was the scene of the circus-like of the black resident Will James in front of a crowd of hundreds in 1909.

In 1969, Cairo was the site of an intense civil rights struggle to end segregation and create job opportunities at the local McDonald's. The threat of violence resulted in the National Guard being called in to restore order. The United Front civil rights organization led a decade-long of white-owned businesses -- meaning all of them. Its economy crippled, Cairo has emerged slowly from the contention.

The city today faces many significant socio-economic challenges for the remaining population, including poverty, issues in education, employment and rebuilding its tax base. A community clinic offers medical and dental care, and also several mental health services. Cairo’s turbulent history is chronicled on a concept music CD called "Greetings From Cairo, ", released in 2005 by musician .

The city is served by . Based on Census estimates, the Cairo school district has the highest percentage in Illinois of children in poverty, 60.6%. It is 15th highest in the United States. [" [http://www.suntimes.com/news/education/734613,CST-NWS-poorskul10.article If you're poor, you have to work harder... nothing is fair] " "Chicago Sun Times", January 10, 2008]

Cairo's location on a spit of land that lies between the Mississippi and Ohio Rivers made multiplexing US 51, 60 and 62 briefly through Illinois more practical than directly connecting and . The result of Cairo's position as a critical highway junction is that Missouri and Kentucky are the only states to border each other with no direct highway connection between them.