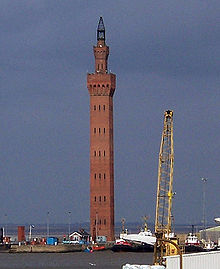 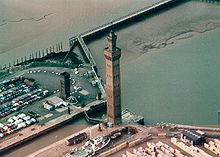 Grimsby Dock Tower is a hydraulic accumulator tower and a famous maritime landmark in Grimsby, North East Lincolnshire, England. It was completed on 27 March 1852 with the purpose of containing a 30,000 UK gallon (136 m³) hydraulic wrought iron reservoir at a height of 200 feet (61 m), to provide hydraulic power (rather than a supply of water) to the lock gates and cranes of Grimsby Docks.[1] The extreme height of the tower was necessary to achieve sufficient pressure. Water towers for water supply purposes don't need anything approaching this height.

An outline of the development of different methods of supplying water under pressure for operating hydraulic appliances may be of assistance in setting the Grimsby Tower in its context. The first hydraulic operation was in 1846 when William Armstrong built a crane powered by water from the town mains at Newcastle. Further cranes followed but one major problem was the fluctuating pressure of water in the town mains. At Grimsby Docks, Armstrong decided that the hydraulic machinery (for cranes, lock gates and sluices) should have its own constant pressure supply, so the tower was built to carry a tank 200 feet (61 m) above the ground with a direct feed into the machinery. Small pumps topped up the tank as the hydraulic machinery drew off water. The tower system was brought into use in 1852 working the machinery of the lock gates, dry-docks and fifteen quayside cranes, and also to supply fresh water to ships and the dwelling houses on the dock premises. The water was obtained from a well, fifteen feet in diameter and forty-seven feet deep, with a boring of five inches in diameter to the chalk rock in the centre, situated near to where the Grimsby Evening Telegraph has its present offices. The well was also fed by seven borings of five inches in diameter, at intervals in a length of three hundred feet, which discharged into the well by a brick culvert three feet in diameter.

Water was conveyed from the well to the tower in a cast iron pipe thirteen inches in diameter when it was then forced into the tank by two force pumps, each of ten inches in diameter, worked by a duplicate, horizontal engine of twenty-five horse power. All the engines, pumps and pipes and the whole of the machinery were made by Mr Mitchell of the Perran Foundry, Cornwall.

During the building of the tower, Armstrong developed another system using weighted accumulators, which at once was found to have great advantages. The working hydraulic pressure was greater, permitting more compact and cheaper machinery and everything was at ground level. The first such installation was at New Holland dock and pier, actually brought into use more than a year before the Grimsby system.

The tower was designed by James William Wild and was based around the design of the Torre del Mangia tower on the Palazzo Pubblico in Siena and therefore, is closely related to the Joseph Chamberlain Memorial Clock Tower of Birmingham University. It was built under the supervision of J. M. Rendel, who was the civil engineer in charge of construction of the Royal Dock.

The ground floor of the tower was lined with pink, white and blue drapery when Queen Victoria came with Prince Albert to visit the dock and 'open' the tower in October 1854. Her Majesty gave permission for Prince Albert, the Prince of Wales and the Princess Royal to accompany Mr Randel in the hydraulic lift to the gallery running around the tower above the water tank, from which a splendid view of Grimsby, Cleethorpes and the mouth of the River Humber is obtained. The lift is no longer in operation with access to the top via a spiral staircase in one corner of the building. The second balcony is currently used for the transmission and reception of radio signals.

The tower is Grade I listed and is the subject of a Preservation Order. It is 309 feet (94 m) high, 28 feet (8.5 m) wide at the base, and tapers gradually to 26 feet (7.9 m) below the first projection; its walls are 4 feet (1.2 m) thick and narrow to 3 feet (0.91 m) at the string course under the corbels. The bricks of this plain brick tower were made from clay obtained from excavations in the marsh adjoining the docks, and are set in blue lime mortar. Hoop iron bond is used in the walls to a considerable extent. The foundation of the tower is a solid masonry wall built upon a timber bearer piling. Approximately one million bricks were used in its construction. Local legend has it that the tower was built on a foundation of cotton wool; in reality, bales of sheep's wool were used to absorb water that could not be bailed out from the foundations. It is believed the bales were left in the foundations during construction.

During the Second World War, there were plans to demolish the tower, as it acted as a beacon for German Luftwaffe aircraft heading towards Liverpool. Later, a plaque was placed on the bricks paying tribute to the minesweeper crews of the war.

The Dock Tower continued to provide water for hydraulic working until 1892 when the erection of the hydraulic accumulator tower on the opposite pier approximately 200 feet (61 m) to the North West of the Dock Tower took over. Present dock and lock machinery are powered by electric or electro-hydraulic energy. Water in this structure was pressurized by a 300-tonne weight. Concrete and iron being far denser than water, they can store the same energy by lifting a heavier weight through a shorter distance. This effectively brought to an end the practical use of the Dock Tower. However, for many Grimbarians, the structure will remain the true monument to the town's maritime heritage and is visible from miles around. Today, people abseil down the side of the tower to raise money for charities, although it is generally not open to the public.

There is a model of the Grimsby Dock Tower entirely constructed of Lego, at Legoland in Windsor. While the tower itself is correct, a large building has been incorrectly added to the base of the tower.