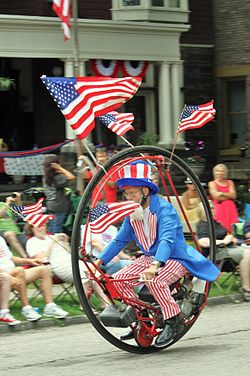 Keith Dufrane rides his monowheel in the 2011 Doo Dah Parade in Columbus, Ohio.

A monowheel is a one-wheeled single-track vehicle similar to a unicycle. However, instead of sitting above the wheel, the rider sits either within it or next to it. The wheel is a ring, usually driven by smaller wheels pressing against its inner rim. Most are single-passenger vehicles, though multi-passenger models have been built.

Pedal-powered monowheels were built in the late 19th century; most built in the 20th century have been motorized. Some modern builders refer to these vehicles as monocycles, though that term is also sometimes used to describe motorized unicycles.

Today, monowheels are generally built and used for fun and entertainment purposes, though from the 1860s through to the 1930s, they were proposed for use as serious transportation.

In a two-wheel mode of transportation, two systems (wheels) affect motion. Typically one wheel provides the force to control speed, while the other handles changes in direction: steering. For a monowheel, both direction and speed are controlled through the same physical apparatus; this generally makes steering more difficult. In a majority of systems, change in direction is affected by the rider shifting its weight, or in the sudden movement creating a shearing force between a handhold and the axis that the driver is settled on. Better control can usually be achieved at slower speeds. Because of the steering problem, monowheels have never caught on as a widely accepted mode of transportation.

A change in direction can be effected in several ways including:

There have been many proposals for variants or uses, such as a horse-drawn monowheel or a monowheel tank. A variant was proposed that placed two riders outside of the wheel itself, with one person on each side to provide for balance.

An electric monowheel called Dynasphere was tested in 1932 in the United Kingdom.

One interesting variant called a RIOT wheel was presented at Burning Man in 2003. It involves the passengers sitting in front of the wheel and being balanced by a heavy counterweight inside the wheel. Rather than the typical ring drive, this vehicle is powered through a sprocket attached to the spokes.

A company in the Netherlands began taking custom orders of a monocycle configured variant called the Wheelsurf in 2007.

A related vehicle is the diwheel or the dicycle, in which the rider is suspended between or inside of a pair of large wheels placed side by side. An example of this would be the character Axel from the Twisted Metal series of video games published by Sony.

In 1971, an American inventor named Kerry McLean built his first monocycle (aka monowheel). In 2000, he built a larger version, the McLean Rocket Roadster powered by a Buick V-8 engine, which subsequently crashed in 2001 during the initial test run. Fortunately, McLean survived and proceeded to build over 25 different variations of his version of the monocycle, from pedal powered models, 5HP models, all the way up to V8 powered models.

In 2010, Nokia utilized two of McLean's monocycles in their commercials promoting the new Nokia SatNav smartphone.

McLean's latest creation, the 2011 McLean V8 Drag Wheel, of which the wheel itself was machined out of a single piece of high-strength aircraft grade aluminum billet, was completed in 2011.

They are noticeably more common in Japanese anime and manga.