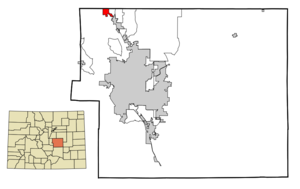 Palmer Lake is a Statutory Town in El Paso County, Colorado, , . The population was 2,179 at the 2000 census. The city is bordered by the Greenland Open Space Preserve to the north, Pike National Forest to the west, Monument to the south, and Ben Lomond and the I-25 corridor to the east. Palmer Lake is the beginning of the 14-mile Santa Fe Regional Trail. The trail is one of the largest continuous trails in El Paso County, running south through Monument to the southern boundary of the Air Force Academy along the historic Atkinson, Topeka and Santa Fe Railroad right-of-way.

Tucked in the mountains behind Palmer Lake are two reservoirs which supply the town with water. Both reservoirs are accessible by a trail used by hikers and bicyclists. The lower reservoir is fenced off from the public, but the upper reservoir has an open shoreline. Both reservoirs and Monument Creek, which flows out of them, are considered part of the town's watershed.

Library services for the city are provided by the Palmer Lake Branch Library, located at 66 Lower Glenway in Palmer Lake.

The town marks the top of the Palmer Divide, a geological ridge running from Palmer Lake eastward. This ridge creates its own weather patterns and separates the drainage to the South and the drainage to the North. The highest point of the divide is about 7352 feet at Monument Hill. It staggers along the county line between Douglas County and El Paso County. This divide separates the metropolitan area from the area. The town's namesake, Palmer Lake, at 7250 feet, is said to be the highest spring-fed lake in the continental US.

There were 843 households out of which 37.7% had children under the age of 18 living with them, 58.1% were married couples living together, 7.7% had a female householder with no husband present, and 32.3% were non-families. 24.0% of all households were made up of individuals and 5.0% had someone living alone who was 65 years of age or older. The average household size was 2.58 and the average family size was 3.15.

The earliest known area inhabitants were native-American tribes - the Mountain Ute, , , and . The earliest recorded activity in the area was the Army's Major Stephen Long Expedition of 1820, which discovered the Colorado State Flower, the Columbine, somewhere between Monument and Palmer Lake. Many homesteaded ranches & farms straddled the El Paso/Douglas County line as early as the 1860s. Mr. David McShane is credited with being one of the first homesteaders, 1865, in the Town of Monument. Henry Limbach and his family were also early arrivals and had much to do with planning and developing of Monument which prospered as the commercial hub for the area on arrival of the railroad.

General William J. Palmer came west after the Civil War to found the City of Colorado Springs & start the Denver & Rio Grande Railroad, a 3-ft. narrow gauge line in 1871. He purchased the land known as the Monument Farms & Lake Property. Palmer Lake was critical to the railroad because the steam trains chugged up to the summit and had to take on water to head down. The lake was the only natural water supply available. Passenger trains would stop for 10 minutes to take on water, or you could get off for a day of picnicking, fishing, and boating or wildflower hikes for a fee of $1.00 roundtrip from Denver.

Dr. William Finley Thompson, a dentist originally from Baltimore and practicing in Denver, purchased land & platted the Town of Palmer Lake in 1882, intending it as a health resort & vacation community. He built the Victorian mansion, Estemere in 1887 for his family, but was facing bankruptcy by 1891 & fled from his creditors. Prior to the automobile, Palmer Lake enjoyed visits from Denverites and others wishing to beat the heat of city summer temperatures. The Rocky Mountain Chautauqua - a people's vacation university - was active from 1887 - 1910, hosting programs in music, art, drama, religion, & nature. The Rockland, a sixty-one room hotel, provided all the amenities any visitor could wish for to include a petting zoo.

Past industries in the area included harvesting ice from Monument & Palmer Lakes which continued until 1941, fox farms, sawmills, angora rabbit raising, and dry-land potato and grain farming. In 1894 there were over 20,000 acres under cultivation but in 1895 some of the potato crops did not mature because of a disease (potato blight) and potato growing slowed and finally stopped. At that time, Monument was famous for holding an annual "Potato Bake," a fall celebration where a free feast would be held just across the tracks from Front and Second Streets.

The area around the two towns remained largely as ranch and farmland until the Air Force Academy was opened in 1958. Woodmoor was originally planned to be an area where the staff of the Air Academy and other military retirees could take up residence. From the Monument and Woodmoor area to the south, the land kept to its ranching heritage until the growth of Colorado Springs spawned housing developments starting about the mid 1980’s. Most growth along this part of the I-25 corridor has occurred since 1990.

The area has a remarkable history including events associated with the "wild west." There have been Indian raids, scalping's and saloon shootings. There were several forts in the area where settlers could hole up until the trouble passed. One of these is the "McShane Fort" located just off highway 105, close to the railroad overpass. Posses have apprehended and strung up murderers on the outskirts of Monument and Palmer Lake. The area was home to five gold mines however, none hit the mother lode. Our historical heritage is rich with the knowledge of our pioneer pathfinders who settled the land and left their mark for all to see and learn from.

The Palmer Lake Star on Sundance Mountain has been part of the local landscape for the better part of the 20th century. The five-pointed star, measuring 500 feet across and consisting of 91, 40-watt non-glare bulbs, is lighted for the month of December and on other special occasions. The star dates back to 1934, when several members of Palmer Lake came up with the idea. Construction on the project was a community effort. The property on Sundance Mountain where the star was erected was owned by Art and Reba Bradley, who donated the property to Palmer Lake in 1966. When Mrs. Bradley died in 1979, part of her estate was left to the Palmer Lake Fire Department for the maintenance of the star. In 1976, the star was completely rebuilt with new cable and steel pole in concrete as part of a bicentennial project.