The opposition procedure before the European Patent Office (EPO) is a post-grant, contentious, inter partes, administrative [1] procedure intended to allow any European patent to be centrally opposed. European patents granted by the EPO under the European Patent Convention (EPC) may be opposed by any person from the public (no commercial or other interest whatsoever need be shown). This happens often when some prior art was not found during the grant procedure, but was only known by third parties.

The purpose of the opposition proceedings is to give opponents the opportunity to challenge the validity of a granted European patent.[4]

In addition, an opposition is also rejected as inadmissible if it fails to meet the requirements of Rule 76(2)(a), (b) and (d) EPC[8] after the opponent was invited to remedy to these failures within a given time limit. If the opposition is not admissible, the opposition is rejected under Rule 77(1) or (2) EPC.[9] 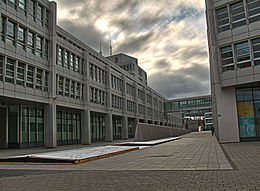 Buildings of the EPO (on both sides of the Kurt-Haertel-Passage, Munich, Germany) where notably some oppositions are examined.

Issue and effects of the opposition

After the end of the opposition proceedings, the patent is either

The opposition has effect on all designated states in the European patent. Decisions by Opposition Divisions, like any other final decisions of first instance divisions, are appealable.[27]

A decision of the EPO to revoke a European patent is final (when the opportunity to appeal before the EPO is exhausted), which makes the opposition proceedings at the EPO especially attractive for opponents.[28] In contrast, a decision of the EPO not to revoke a European patent (the decision instead maintaining the patent as granted or in an amended form) leaves the way open for revocation by the national court. The EPO decision does not create an estoppel precluding a subsequent challenge by an unsuccessful opponent at the national level (at least before the English courts).[29] The validity of a European patent can be scrutinised both at the national level, before a national court, and at the international level, before the European Patent Office during opposition. The same is not true for infringement proceedings, upon which national courts exercise exclusive jurisdiction.

Each party to the opposition proceedings normally bears the costs it has incurred, unless the Opposition Division (or, in appeal proceedings, the Board of Appeal under Rule 100(1) EPC[30]), for reasons of equity, orders a different apportionment of costs.[31] For example, in case T 1306/05, a highly relevant document had been lately filed, without any valid justification, by the opponent during the oral proceedings before the Board of Appeal, thus rendering useless both the oral proceedings and the patent proprietor preparation thereto.[32] A different apportionment of costs has been ordered by the Board of Appeal. The patent proprietor has requested [33] about €26,000 to be paid by the opponent.[34]

The opponent status cannot be freely transferred.[37][38] As far as legal persons are concerned, the opposition can only be transferred or assigned to a third party together with the business assets belonging to a company, i.e. its economic activity, and more precisely the assets in the interests of which the opposition was filed.

Intervention and observations by third parties

Overall, about 6% of the European patents granted by the European Patent Office are opposed.[28][48] Of those, about 1/3 are revoked, 1/3 are maintained in an amended form, which generally means "reduced in scope", and 1/3 are maintained as granted, that is, the opposition is rejected. The opposition rate (i.e. the number of oppositions filed per 100 granted patents) before the EPO is consistently higher in the closest available proxy for the pharmaceutical sector than it is in organic chemistry and in all sectors (overall EPO average).[49]

Filing an opposition before the EPO is reportedly relatively affordable, "as the cost varies between €6000 and €50,000 (including patent lawyers’ fees)"[28] (as of 2009). In contrast, the costs for litigating a European patent can be much higher ("For example, in Germany the total litigation costs can be as high as €2 million with €10 million at stake"[28]). An opposition case is reported to take on average three years to be handled by the EPO.[28]

The "possibility of parallel validity proceedings in national courts and in the EPO is inherent in the legal arrangements in the EPC under which the EPO was established".[29] If a third party files an opposition to a European patent with the EPO and also, in parallel, initiates a revocation action (also called "nullity action" or "validity proceedings") against the same patent before a national court, the national court (at least in England) may exercise its discretion to either

The rules and practice differ from country to country in that respect. "For example, as of 2008, Belgium and France will stay the main proceeding until a final decision has been reached by the EPO whereas in Germany, Italy, the Netherlands and in the United Kingdom such a stay is not automatic and in most cases the courts will continue the proceedings notwithstanding the opposition. ... However, in Germany national nullity proceedings cannot be started before the Federal Patent Court until the EPO opposition proceedings have been concluded or the opposition period has expired."[28]

Composition of an Opposition Division

According to Article 19(2) EPC, "[a]n Opposition Division shall consist of three technically qualified examiners, at least two of whom shall not have taken part in the proceedings for grant of the patent to which the opposition relates. An examiner who has taken part in the proceedings for the grant of the European patent may not be the Chairman." Violations of Article 19(2) EPC are considered to be substantial procedural violations.[50]