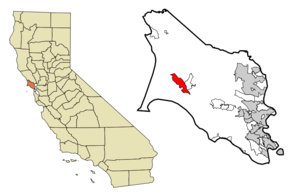 mapsize = 250x200px
map_caption = Location in Marin County and the state of

Inverness is an unincorporated community and (CDP) located in western . In the census, the population was 1,421. The community is named after in by a Scots landowner.

Inverness is north of San Francisco, on a bay of the .

Inverness is located on the west shore of Tomales Bay, which runs southeast along the line of the San Andreas Fault. Surrounded by Point Reyes National Seashore, it is primarily a residential community, with little industry other than tourism. It has a small downtown area with a general store, post office, library, two restaurants and two gift shops. A third restaurant is located a short way north of downtown. There are also a number of hotels and inns spread throughout the town.

One aspect of the town is a concentration of recreational (and some commercial) boating. There is a small public marina, a few private piers, and the Inverness Yacht Club.

Portions of the John Carpenter film "" as well as most of his film "Village of the Damned" were shot in and around Inverness.

The town is a 15 miles or so from , named after , who explored the coast in the 17th Century. Although Drake's official log was lost, the ship's doctor's log described landing in an area that reminded him of the White Cliffs of Dover. Drake's Bay is backed by similar-looking cliffs, leading many to believe this is where the ship landed.

The region became the property of James Shafter, who began to develop the property in the 1890s. It became a summer resort where people from San Francisco and Oakland came to camp, hike and swim in Tomales Bay. Many built small summer cabins that still exist today. Small steamboats took day trippers down the bay to secluded beaches. They left from Brock Schreiber's boathouse, which has been preserved and is a prominent local landmark with its prominent sign "Launch for Hire."

In 1995, Inverness Ridge was the site of the Mt. Vision Fire, which burned a large area of and a number of homes built on the ridge. The town itself was threatened but was saved by helicopters dipping water from Tomales Bay to drop on the Bishop pine forest between the town and the burning ridgetop.

The town is adjacent to the .

Inverness is spread out along approximately convert|2|mi|km of the western shore and valleys of on the , it provides services to visitors to the Point Reyes National Seashore and .

Other nearby towns include Point Reyes Station, Inverness Park, Olema, and Marshall.

There were 707 households out of which 16.0% had children under the age of 18 living with them, 41.9% were married couples living together, 5.5% had a female householder with no husband present, and 48.4% were non-families. 37.2% of all households were made up of individuals and 10.0% had someone living alone who was 65 years of age or older. The average household size was 1.98 and the average family size was 2.56.