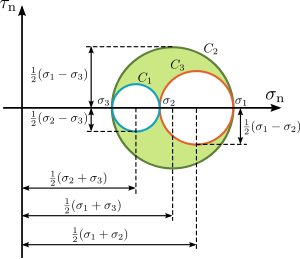 Mohr's circles for a three-dimensional state of stress

Mohr's circle, named after Christian Otto Mohr, is a two-dimensional graphical representation of the state of stress at a point. The abscissa,

, of each point on the circle are the normal stress and shear stress components, respectively, acting on a particular cut plane with a unit vector

. In other words, the circumference of the circle is the locus of points that represent the state of stress on individual planes at all their orientations.

Karl Culmann was the first to conceive a graphical representation for stresses while considering longitudinal and vertical stresses in horizontal beams during bending. Mohr's contribution extended the use of this representation for both two- and three-dimensional stresses and developed a failure criterion based on the stress circle.[1]

Other graphical methods for the representation of the stress state at a point include the Lame's stress ellipsoid and Cauchy's stress quadric.

A two-dimensional Mohr's circle can be constructed if we know the normal stresses σx, σy, and the shear stress τxy. The following sign conventions are usually used:

To construct the Mohr circle of stress for a state of plane stress, or plane strain, first we plot two points in the

space corresponding to the known stress components on both perpendicular planes, i.e.

(Figure 1 and 2). We then connect points

by a straight line and find the midpoint

which corresponds to the intersection of this line with the

axis. Finally, we draw a circle with diameter

of the circle is

, and the coordinates of its centre are

axis (note that the shear stresses are zero for the principal stresses). 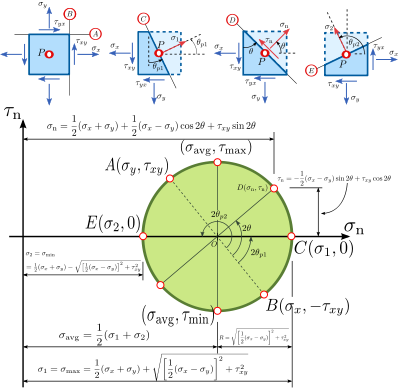 The following procedure is used to draw a Mohr's circle and to find the magnitude and direction of maximum stresses from it.

. It is important to pay attention to the use of these two equations as they look similar.

The previous discussion assumes, implicitly, that there are two orthogonal directions x and y that define a plane in which the stress components

are known. It is also implicit that these stresses are known at a point

in a continuum body under plane stress or plane strain. The Mohr circle, once drawn, can be used to find the components of the stress tensor for any other choice of orthogonal directions in the plane.

Stress components on an arbitrary plane 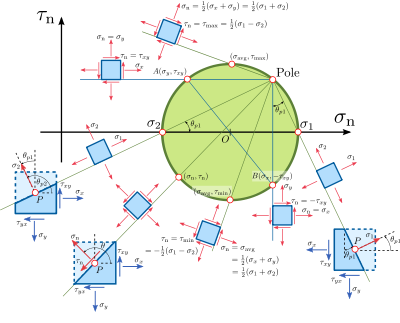 Figure 2. Mohr's circle for plane stress and plane strain conditions (Pole approach). Any straight line drawn from the pole will intersect the Mohr circle at a point that represents the state of stress on a plane inclined at the same orientation (parallel) in space as that line.

Using the Mohr circle one can find the stress components

on any other plane with a different orientation

that passes through point

. For this, two approaches can be used:

Mohr's circle for a general three-dimensional state of stresses 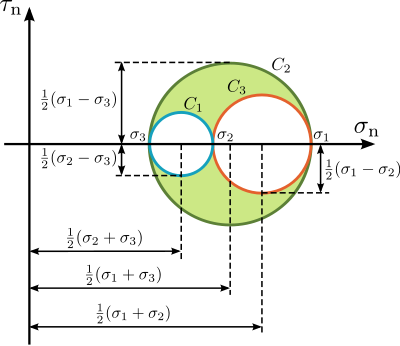 Figure 3. Mohr's circle for a three-dimensional state of stress

To construct the Mohr's circle for a general three-dimensional case of stresses at a point, the values of the principal stresses

and their principal directions

must be first evaluated.

Considering the principal axes as the coordinate system, instead of the general

coordinate system, and assuming that

, then the normal and shear components of the stress vector

, for a given plane with unit vector

, we can solve for

is non-negative, the numerators from the these equations satisfy

These expressions can be rewritten as

which are the equations of the three Mohr's circles for stress

, and their centres with coordinates

lie on these circles or within the shaded area enclosed by them (see Figure 3). Stress points

lie on, or outside circle

lie on, or inside circle

lie on, or outside circle