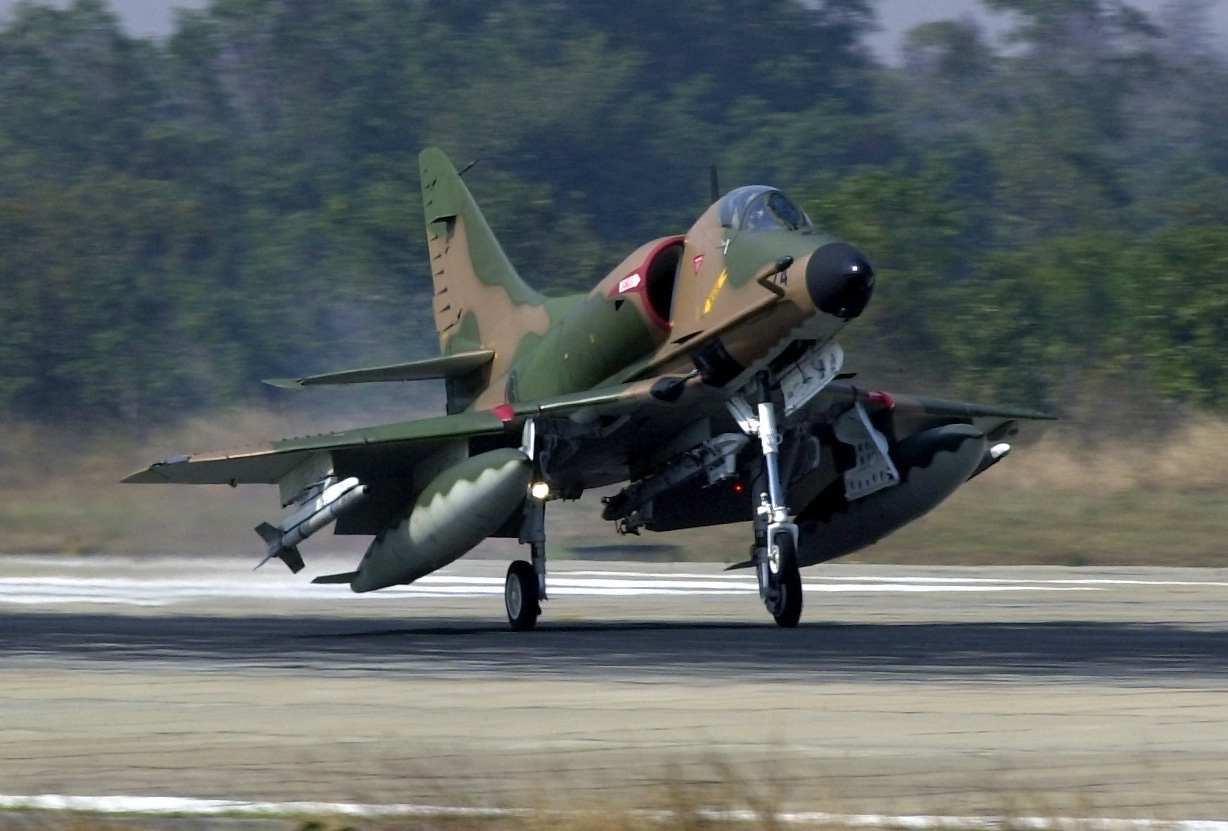 The Singapore Aerospace A-4SU Super Skyhawk is a major upgrade of the A-4S Skyhawk attack aircraft developed for and was used exclusively by the .

Starting in , the (RSAF) began to acquire s for use. The first batch of over 50 airframes (ex- A-4Bs & TA-4Bs) was ordered and was subsequently requisitioned from the Military Aircraft Storage and Disposition Center (MASDC) at Davis-Monthan AFB, Arizona which was released to the Aircraft Service (LAS) Company at and its subsidiary Lockheed Aircraft Service Singapore (LASS) at , Singapore for a major overhaul and refurbishment.

These aircraft would later emerge as the A-4S single-seater (44 airframes) and the TA-4S two-seat trainer (3 airframes), all having more than 100 changes incorporated (these included a slightly longer nose to house a new avionics package, five stores s instead of the usual three, a saddle style Automatic Direction Finder dorsal hump, , spoilers, cranked refueling probe, capability, brake parachute housing below the jetpipe and 30 mm s in place of the original Colt Mk 12 20 mm cannons) into the standard A-4B airframes. A later order of 4 two-seat trainer airframes was placed in , and these joined the RSAF in .

The TA-4S trainers were not the standard TA-4 with a common cockpit for the student and instructor pilot, but were instead rebuilt by Lockheed with a 28-inch fuselage plug inserted into the front fuselage and a separate bulged cockpit (giving better all round visibility) for the instructor seated behind the student pilot. This arrangement was not the first by Lockheed as it had built the SR-71B Blackbird trainers utilising the same layout of stepped cockpits prior to refurbishing the A-4S for the RSAF.

A second batch of 70 airframes was ordered (mix of ex-US Navy A-4Bs and A-4Cs) in , these were shipped directly to Singapore for rebuilding with the A-4Cs being rebuilt as the A-4S-1s while the A-4Bs was to remained in storage for use as spares. Along with a small number of TA4S-1s, these newer Skyhawks (characterised by its straight refueling probe instead of the cranked refueling probe found on the original A-4S/TA-4S) would join the RSAF as attrition replacements from onwards with the balance being allocated in to form a new unit - 145 Sqn which was also based at .

In , a third order of 16 stored TA-4Bs from the Aerospace Maintenance and Regeneration Center (boneyard) would see it being converted and rebuilt as the TA-4S-1 trainers (8 airframes). In RSAF service, the A-4S-1/TA-4S-1 were given 3-digit serial starting with 9 (eg. 918, 950). All in all, approximately 150 airframes (all A-4Bs and Cs) were acquired by Singapore.

In , as a result of four A-4S being written off in separate accidents, coupled with the low serviceability of the original batch of A-4S. Investigations conducted by RSAF reveal that the Wright J65 turbojet engines in use by the Skyhawks were too old and it was this very reason that the RSAF decided to upgrade the A-4S/TA-4S rather than to replace them.

With Singapore Aerospace contracted as the main contractor for the upgrading project and a non-afterburning -GE-100D turbofan engine selected as the new engine, the upgrading project would later be extended to cover the entire fleet of newer A-4S-1s as well as taking the opportunity to completely modernise the avionics package (newly installed equipment now included a laser seeker mounted in the nose, (INS), (TACAN) system, fore & aft s (RWR) and chaff/flare s which were mostly of Israeli origins) of the aircraft which had been in use since the late 1950s, note that these are ex-US Navy airframes.

Thus modernised, the new A-4SU Super Skyhawks began rolling out to re-equip the 145 Sqn first, followed by 143 Sqn and 142 Sqn of the RSAF from onwards. The type was also utilised by the aerobatic display team for precision aerial manoeuvers from to .

After 31 years of operations, the RSAF officially withdrew its fleet of A-4SU Super Skyhawks from operational combat service in Singapore on . The A-4SU's achievements included flying directly from Singapore to the Philippines, incorporating the RSAF's first air-to-air refuelling mission in 1986, [cite web| title= RSAF's first air-to-air refuelling |url=http://sg.geocities.com/sotong_onion/aircraft_series.html |publisher =sg.geocities.com ] as well as the aerobatic display of the 'red and white' Super Skyhawks flown by the during Asian Aerospace 1990, 1994 and 2000, it was last used by the Black Knights during Singapore's held on . A month before its retirement, the Skyhawk squadron (145 Sqn) won the top honours in a strike exercise against its more modern F-16 and F-5 counterparts and emerged as the Top combat squadron in the , an honour it has held since year . [cite web|url= http://www.mindef.gov.sg/imindef/news_and_events/nr/2000/jun/21jun00_nr2.html |title= The SAF's Best Combat Units |publisher= MINDEF press release, Dated: 21 Jun 2000]

In 1998, the French government offered the use of facilities at Cazaux Airbase in the south of France. A 25-year lease for basing rights of 18 A-4SU aircraft and approximately 250 RSAF personnel and their families was signed later that year. Back in Singapore, 142 Sqn was disbanded in 1997, and its aircraft were handed over to 150 Sqn, which had given up its SIAI Marchetti SF.260 basic trainers. [cite web|url= http://www.mindef.gov.sg/imindef/resources/speeches/2002/24jul02_speech.html |title= Inauguration of the 150 Squadron Building in Cazaux Air Base, France |publisher= MINDEF press release, Dated: 24 Jul 2002] The new squadron then took up the role of advanced jet training, using its aircraft as a lead-in fighter trainer for RSAF pilots. This made it the prime candidate for moving to France, and the first of 18 aircraft were "packed" and sent to France by ship in mid-1999 as part of the RSAF's Advanced Jet Training Program. [cite web|url= http://www.mindef.gov.sg/imindef/news_and_events/nr/2002/jul/24jul02_nr.html |title= RADM (NS) Teo Inaugurates RSAF’s Advanced Jet Training Facilities at Cazaux |publisher= MINDEF press release, Dated: 24 Jul 2002] The four remaining training aircraft are scheduled to retire in 2007.