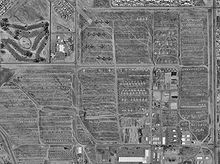 Boeing 707s being used for salvage parts for the C-135 airframe at AMARG.

B-1 Bombers in storage at AMARG 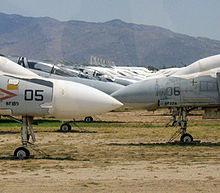 AMARG takes care of more than 4,400 aircraft, which would make it the second largest air force in the world. An Air Force Materiel Command unit, the group is under the command of the 309th Maintenance Wing at Hill Air Force Base, Utah. AMARG was originally meant to store excess Department of Defense and Coast Guard aircraft, but has in recent years been designated the sole repository of out-of-service aircraft from all branches of the US government.

AMARG was established in 1946[2] as the 4105th Army Air Force Unit to house B-29 and C-47 aircraft. Davis-Monthan Air Force Base was chosen because of Tucson's low humidity, infrequent rainfall, alkaline soil and high altitude of 2,550 feet (780 m), reducing rust and corrosion.[3][4] The hard soil makes it possible to move aircraft around without having to pave the storage areas.

In 1948, after the Air Force's creation as a separate service, the unit was renamed the 3040th Aircraft Storage Depot. In 1965, the depot was renamed the Military Aircraft Storage and Disposition Center (MASDC), and tasked with processing aircraft for all the US armed forces (not just the Air Force). The U.S. Navy had operated its own boneyard at Naval Air Station Litchfield Park at Goodyear, Arizona for Navy, Marine and Coast Guard aircraft. In February 1965 some 500 aircraft were moved from Litchfield Park to Davis-Monthan AFB. NAS Litchfield Park was finally closed in 1968.[5]

In the 1980s, the center began processing ICBMs for dismantling or reuse in satellite launches, and was renamed the Aerospace Maintenance and Regeneration Center (AMARC) to reflect the expanded focus on all aerospace assets.[6]

In the 1990s, in accordance with the START I treaty, the center was tasked with eliminating 365 B-52 bombers.[7] The progress of this task was to be verified by Russia via satellite and first-person inspection at the facility. Initially, the B-52s were chopped into pieces with a 13,000-pound guillotine winched by a steel cable, supported by a crane.[8] Later on, the tool of choice became K-12 rescue saws. This more precise technique afforded AMARG with salvageable spare parts.

In May 2007, command of AMARC was transferred to the 309th Maintenance Wing, and the center was renamed the 309th Aerospace Maintenance and Regeneration Group.[1]

There are four categories of storage for planes at AMARG:

AMARG employs 550 people, almost all civilians. The 2,600 acres (11 km2) facility is adjacent to the base. For every $1 the federal government spends operating the facility, it saves or produces $11 from harvesting spare parts and selling off inventory.[9] Congressional oversight determines what equipment may be sold to which customer.

An aircraft going into storage undergoes the following treatments:

The Group annually in-processes an undisclosed number of aircraft for storage and out-processes a number of aircraft for return to the active service, either repainted and sold to friendly foreign governments, recycled as target or remotely controlled drones[10] or rebuilt as civilian cargo, transport, and/or utility planes.[11] For instance, Turkey has purchased several Vietnam-era jets in recent years that had been stored on site. There is much scrutiny over who (civilians, companies, foreign governments) and what kind of parts they may buy. At times, these sales are canceled, the Air Force for example reclaimed several F-16's from AMARG for the Strike Fighter Tactics Instructor Courses which were originally meant to be sold to Pakistan, but never delivered due to an early-90's embargo.

AMARG is controlled-access site, and is off-limits to anyone not employed there without the proper clearance. The only access for non-cleared individuals is via a bus tour which is conducted by the nearby Pima Air & Space Museum. Bus tours are Monday though Friday only.[12]

Use in movies and TV

AMARC has also been site of filming for scenes in several movie and television productions, despite the rather heavy security of AMARG and the base in general. The most recent and notable of these is Transformers: Revenge of the Fallen. The exterior scenes of the Smithsonian set were actually filmed in the Boneyard. The background of several shots can be clearly recognized while looking toward the fence-line from one of the major streets that run along the perimeter.[13] Other works include the 1991 movie Harley Davidson and the Marlboro Man; the music video for Tom Petty and the Heartbreakers' song "Learning To Fly"; and various other productions, including a brief shot in Baraka.[14]