Classification of the different kinds of optical autocorrelation.

In optics, various autocorrelation functions can be experimentally realized. The field autocorrelation may be used to calculate the spectrum of a source of light, while the intensity autocorrelation and the interferometric autocorrelation are commonly used to estimate the duration of ultrashort pulses produced by modelocked lasers. The laser pulse duration cannot be easily measured by optoelectronic methods, since the response time of photodiodes and oscilloscopes are at best of the order of 200 femtoseconds, yet laser pulses can be made as short as a few femtoseconds.

(Note: some practitioners are of the opinion that to accurately and definitively determine the pulse length, one needs to perform a full-intensity-and-phase type of measurement, such as SPIDER or FROG. The latter are two competing measuring techniques introduced after optical autocorrelation).

For a complex electric field E(t), the field autocorrelation function is defined by

The field autocorrelation is readily measured experimentally by placing a slow detector at the output of a Michelson interferometer. The detector is illuminated by the input electric field E(t) coming from one arm, and by the delayed replica E(t − τ) from the other arm. If the time response of the detector is much larger than the time duration of the signal E(t), or if the recorded signal is integrated, the detector measures the intensity IM as the delay τ is scanned:

Expanding IM(τ) reveals that one of the terms is A(τ), proving that a Michelson interferometer can be used to measure the field autocorrelation, or the spectrum of E(t) (and only the spectrum). This principle is the basis for Fourier transform spectroscopy. 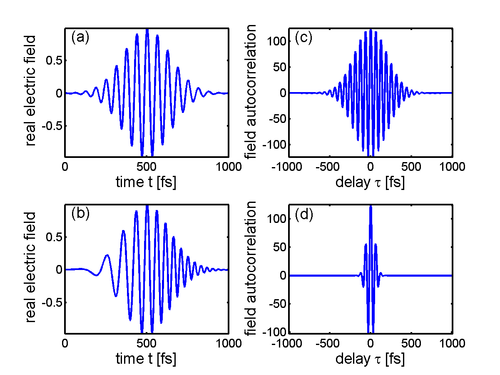 The optical implementation of the intensity autocorrelation is not as straightforward as for the field autocorrelation. Similarly to the previous setup, two parallel beams with a variable delay are generated, then focused into a second-harmonic-generation crystal (see nonlinear optics) to obtain a signal proportional to (E(t) + E(t − τ))2. Only the beam propagating on the optical axis, proportional to the cross-product E(t)E(t − τ), is retained. This signal is then recorded by a slow detector, which measures

The generation of the second harmonic in crystals is a nonlinear process that requires high peak power, unlike the previous setup. However, such high peak power can be obtained from a limited amount of energy by ultrashort pulses, and as a result their intensity autocorrelation is often measured experimentally. Another difficulty with this setup is that both beams must be focused at the same point inside the crystal as the delay is scanned in order for the second harmonic to be generated.

longer than the width of the intensity, and it is 1.54 longer in the case of an hyperbolic secant squared (sech2) pulse. This numerical factor, which depends on the shape of the pulse, is sometimes called the deconvolution factor. If this factor is known, or assumed, the time duration (intensity width) of a pulse can be measured using an intensity autocorrelation. However, the phase cannot be measured. 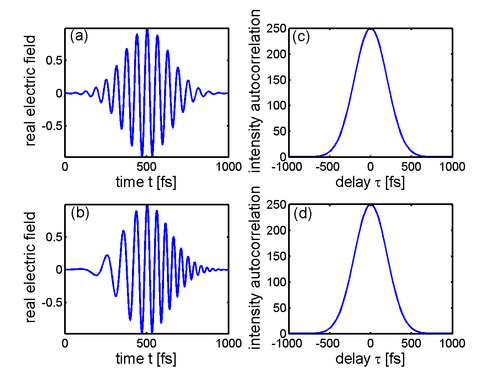 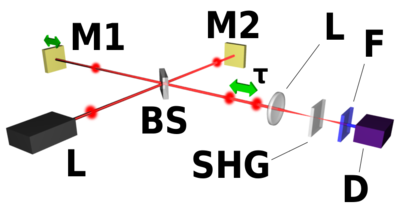 As a combination of both previous cases, a nonlinear crystal can be used to generate the second harmonic at the output of a Michelson interferometer, in a colinear geometry. In this case, the signal recorded by a slow detector is

IM(τ) is called the interferometric autocorrelation. It contains some information about the phase of the pulse: the fringes in the autocorrelation trace wash out as the spectral phase becomes more complex. 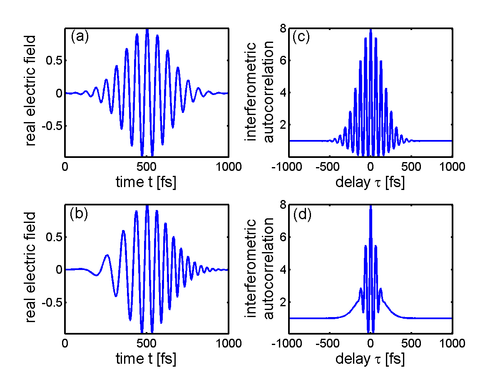 The optical transfer function T(w) of an optical system is given by the autocorrelation of its pupil function f(x,y):