Considered as one of the best goalkeepers in the history of Iranian football, he was capped 62 times for the Iran national football team. In 2000, the Asian Football Confederation ranked him the second best Asian goalkeeper of the 20th century.[5]

As a Manager, he won a Azadegan League and a Hazfi Cup, as well as a runner-up place in AFC Champions League.

Hejazi was born on 19 December 1949 in Tehran, Iran. His father, Ali Akbar had a realestate in Tehran.[6] He was admitted to Allameh Tabatabai University in 1977.[7] He was later enrolled in Nader F.C. in 1964 and played for club until 1965. After that, he signed a contract with Taj Tehran and started his career in a professional club.

In summer 1977 he changed the club joining Shahbaz Tehran, trying to win the Takht Jamshid Cup 1977–78 with his famous National team mates Gholam Hossein Mazloumi, Nasrollah Abdollahi, Ebrahim Ghasempour and Hamid Majd Teymouri. So it was a tremendous surprise, that Shahbaz could only reach the 11th place. In the following year Shahbaz was leading the ranking in the season 1978/79, when in autumn 1978 – due to the political uprisings, which ended with the Iranian Revolution in February 1979 – the season was canceled.

Taj Tehran after winning the Asian Champion Club Tournament in 1970

After the 1978 FIFA World Cup, Hejazi received an offer from Manchester United. He trained and played with the club for a month, even appearing in a reserve match against Stoke City. Manchester United manager Dave Sexton wanted Hejazi to stay for another two or three months before officially signing a contract with him, but there was no-one at the IRFF at the time of the Islamic Revolution to arrange the extension, which led to Manchester United signing Gary Bailey instead.

Hejazi remained as Esteghlal's main goalkeeper until 1986. There he won the Tehran provincial league in 1983 and 1985 and the runners-up position in 1982.

His last station was the Bangladeshi club Mohammedan SC in Dhaka, where he stayed for one year and could win his last league title. 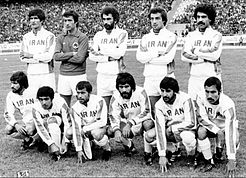 Hejazi joined up with the Iran National Team, just in time to feature in the squad that won the Asian Cup in 1968 and picked up two more in 1972 as the first choice and 1976 as the second choice goalkeeper.

He also represented Iran at the 1972 Munich Olympics and reached the quarterfinals of the Olympic Tournament in Montreal in 1976. In 1974, he had a key role in Iran's victory in the final match (Bahram Mavadat and Mansour Rashidi had played the prior matches) of the football tournament of the Asian Games in Tehran.

Hejazi's most valued tournament was the 1978 FIFA World Cup in Argentina, where he participated as Iran's starting goalkeeper.

He was the captain of the national team during the 1980 Asian Cup and played his last match for Iran in the semi-final match versus Kuwait. After the tournament, a member of Iran's Physical Education Department implemented a policy in which athletes older than 27 years of age would no longer be allowed to compete internationally. Hejazi was effectively forced to retire from international football back then, in spite of being only 29 years old at the time of implementation.

During the 1990s, Hejazi was the manager of a number of football clubs including the Mohammedan SC, the Esteghlal (former Taj) and Esteghlal Ahvaz. During his tenure with the Esteghlal, Hejazi could win the Iranian League in 1998, then took the club to the final match of the Asian Champions League in 1999. They were beaten by the Jubilo Iwata in Tehran. During his years as a coach, Hejazi was the first to discover many talented Iranian football players, including Rahman Rezaei. In early August 2006 Hejazi announced he signed a one year contract as head coach of Azadegan League outfit Nassaji Mazandaran. He resigned from the post in 19 January 2007. On 5 August 2007, He was appointed as head coach of Esteghlal for a second time but he was sacked by club in 8 November 2007 because of bad results after 14 matches. 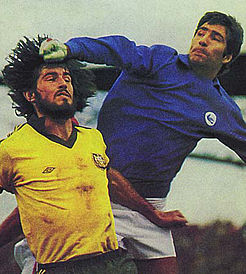 Hejazi (right) in match against Australia in Melbourne, 1977

On 3 November 2004, Hejazi announced his nomination for 2005 presidential election. He was rejected by the Guardian Council of the Constitution of Islamic Republic of Iran because he doesn't have any political career before that few weeks prior to the election. Later, he became a supporter of Ali Akbar Hashemi Rafsanjani in the same election.

He was an opponent to the Economic reform plan of President Mahmoud Ahmadinejad's Government. In April 2011, he made a statement regarding the plan: "I'm very sorry for our people, they have oil, petroleum and ... but some of them are poor".[8]

It is known that after this comment, he was unofficially banned from Iranian Television Network. This was later revoked due to his popularity and the perceived side effects that could have come from this decision.

Hejazi married Behnaz Shafie in 1973.[9] He became father of two, one daughter, Atoosa and one son, Attila, who both grew up to play soccer just like their father. Attila has been playing in Esteghlal F.C. Team B from 1997 to 2004 and Atoosa was the captain of Iran national women futsal team. Atoosa is married to an Iranian soccer player Saeed Ramezani who plays for Foolad F.C. in the Iran Pro League. They have a son named Amir Arsalan.

Hejazi was diagnosed with aggressive lung cancer in late 2009. While trying to resume normal daily activities as a coach, his illness forced him to be hospitalised. Hejazi went into a coma on 20 May 2011 as he was watching the match between Esteghlal and PAS Hamedan soccer teams in the final week of the Iran Pro League. In 23 May 2011, after being unable to recover from a stroke, he died at 10:55 a.m. in Kasra Hospital in Tehran.[10][11] His funeral was held on 25 May 2011 in Azadi Stadium in western Tehran and his body was buried in the Behesht-e Zahra cemetery in southern Tehran on the same day as his final resting place. More than 20,000 people attended his funeral.[12]

Hejazi's popularity went beyond Iran's borders as the iconic Manchester United manager, Sir Alex Ferguson, expressed the club's sincere sympathy for Hejazi's illness in April 2010. In a message, President Mahmoud Ahmadinejad paid homage to Hejazi and characterized him as a renowned and good-tempered Iranian football figure who offered valuable services to national sport.

Mohammed Bin Hammam,[13] President of AFC and Sepp Blatter,[14] President of FIFAboth sent their personal and associations' condolences to his family, the people of Iran and the Iranian football federation. 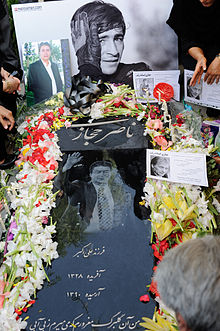 Grave of the Nasser Hejazi in Behesht-e Zahra

Hejazi is considered by many to be the best Iranian and Asian goalkeeper of all time. Hejazi was a member of the all-conquering Iran National Team of the 1960s and 1970s that won the Asian Cup a record three times in a row and represented Iran at two Summer Olympics as well as 1978 FIFA World Cup. After his death, It was proposed that a new stadium will be build in Tehran and will be named to Nasser Hejazi.