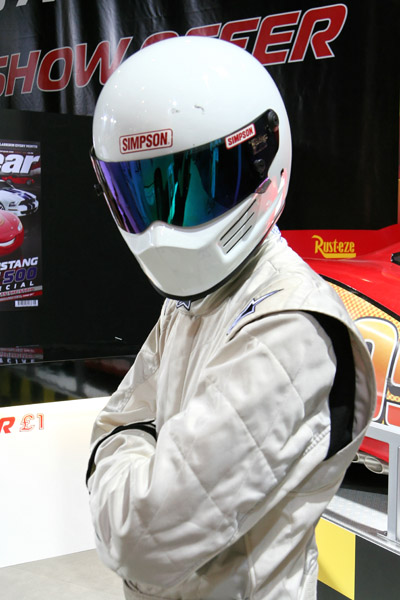 The Stig is the name given to the anonymous on the motoring show "Top Gear". In the show he is cast as a mysterious "tame racing driver" [cite web|url=http://www.bbc.co.uk/topgear/show/powerlaps.shtml|publisher=, |quote=Every performance road car that comes to the Top Gear test track eventually ends up in the hands of our tame racing driver.|accessdate=2008-08-08|title=Power Laps] whose identity is unknown, and who never speaks or removes his helmet on camera. Nonetheless he is fully credited as a presenter, albeit as "The Stig", alongside , and .

The Stig's primary functions on the show are to post lap times in various cars around the in Dunsfold Park, and to train each week's guest in setting a lap time in the feature on the show. In addition the Stig carries out other driving duties when the need arises.

The Stig has also appeared on some of Jeremy Clarkson's motoring specials, such as "Heaven and Hell" and "The Good, The Bad, and The Ugly", as well as on BBC's "".

The Stig's name derives from presenter Jeremy Clarkson's days at ; where, according to Clarkson, new students were always called "Stig". [cite web |last=Rufford |first=Nicholas |coauthors=Smith, Emma |url=http://driving.timesonline.co.uk/tol/life_and_style/driving/article586470.ece?token=null&offset=0 |title=The backroom boy who put Top Gear on top of the world |work= |publisher= |date = 2005-11-06 |accessdate=2006-09-26 |quote=... and then we started to think about reviving Top Gear in a new format, with a track, special guests and the Stig — new boys at Repton were always called Stig...] A proposed name for the Stig was originally "The Gimp" until protests from put a stop to the idea.

The first Stig wore black overalls and helmet. It was introduced in the first episode of the current format by Jeremy Clarkson as the resident test driver, as the presenters could not consistently post fast times themselves. Clarkson noted that "we don't know its name, we really don't know its name, nobody knows its name, and we don't wanna know, cause it's a racing driver." Clarkson then described The Stig as having a very small brain, who had worthless opinions, and a disorder described by Clarkson as "Mansell Syndrome". Its job description was to "just go out there and drive fast". ["Top Gear" Series 1, Episode 1 ()]

Black Stig posted a lap time of 1:46 for the Star in a Reasonably-Priced Car segment. This Stig was used for the first two series of the show. It was then "killed off" at the start of the third series when he was shown driving a modified off the flight deck of HMS "Invincible" during a stunt and landing in the sea. ["Top Gear" Series 3, Episode 1 ()]

After the Black Stig was "killed off", a new "White Stig" was introduced, wearing white overalls and helmet. ["Top Gear" Series 3, Episode 2 ()] White Stig has been featured in the show beyond just the Power Lap segment. His work has included driving cars in other segments of the show, for example finding a winner between the Aston Martin V8 Vantage, and Carrera S on the , ["Top Gear" Series 7, Episode 1] and racing against the hosts in a bid to see who would cross the starting line at a race track; White Stig driving a from , to Knockhill racetrack in against the hosts in assembling an identical car from the ground up. ["Top Gear" Series 8, Episode 7 ()] In Series 10 The Stig was recruited to take public transport in the Cross London Challenge and had to deal with such tasks as riding a bus, using an and having to answer a (but instead just stared at the ringing device). ["Top Gear" Series 10, Episode 5 ()]

White Stig has also appeared outside "Top Gear" in some of Clarkson's motoring specials, such as "The Good, The Bad, The Ugly" where Clarkson reviewed and compared American and non-American cars, "Heaven and Hell", where the Stig was used to compare the track times of the and the , and raced Clarkson, in a , with a . In Clarkson's latest DVD, "Supercar Showdown", The Stig (in a Porsche 911) raced (in an Audi R8) around the Ascari track in Spain to see which was the fastest.

White Stig posted the fastest lap time of 1:44.4 around the "Top Gear" test track for the Star in a Reasonably-Priced Car segment.

Marketing in the lead up to "" stated that the the cast would include The Stig's "Australian cousin" [cite web|url=http://www.bbc.co.uk/pressoffice/bbcworldwide/worldwidestories/pressreleases/2008/05_may/top_gear_australia.shtml|title=Australian Top Gear presenters revealed|publisher=BBC Worldwide Press Releases|date=2008-05-28|accessdate=2008-09-01] but in the first episode he was introduced as The Stig.

There have been two cameo appearances by other Stigs on the show.

Episode 3 of Series 9 was set in the United States, with the presenters purchasing American cars and driving them across four states whilst on holiday. One of the challenges set for the presenters was for the cars to set a lap time around a racetrack, for which "the Stig's American cousin" was introduced. He was nicknamed "Big Stig" by the presenters, due to being somewhat overweight.

Episode 4 of Series 10 featured the presenters driving across . To test the performance of the three cars used by the presenters around a dirt rally track, Clarkson introduced "The Stig's African cousin." This incarnation of The Stig was black, wore only "Puma" shoes, a loincloth and the iconic white helmet. He set lap times for two of the cars, but walked away from the track when Clarkson's failed to start. The others joked that African Stig was trying to get a respectable time by walking the course, and didn't bother using the car as it was too slow.

The Stig's true identity is never revealed on the show, and in order to maintain the secrecy, all shots show him wearing full racing s and matching Simpson Diamondback .

The identity of Black Stig was revealed to be when his book "" was published in 2003. McCarthy is a former Formula 1 driver and test driver for the Benetton, and Williams teams, and also tested for BMW F1.

The identity of White Stig has not been officially revealed. In a Winter Olympics special episode of "Top Gear", The Stig was shown doing a ski jump using a snowmobile. According to the Swedish tabloid newspaper "", the driver performing the ski jump stunt was Dan Lang, a Swedish snowmobile cross driver. [cite news
url = http://www.aftonbladet.se/vss/nyheter/story/0,2789,788722,00.html
title = Han hoppar med skoter
language = Swedish
work =
publisher = Landsorganisationen i Sverige/
date = 2006-03-07
accessdate = 2007-09-26
quote = _sv. Dan Lang flög ut från OS-backen i 134 km/h. I 134 kilometer i timmen hoppade Dan Lang, 24, ut från 90-meterbacken i Lillehammer. På skoter.] In January 2006, a Daily Express article reported that was The Stig. [cite news
last = Lorraine
first = Veronica
title = 'The Stig' is unmasked
work =
publisher = Northern and Shell Media
date = 2006-01-16
quote = We can reveal he is none other than former Formula 1 and British touring car championship driver Julian Bailey.] The Stig has talked in an interview with a Dutch TV Channel, Veronica where he had a distinctly English accent. [ [http://www.finalgear.com/news/2007/03/12/the-stig-speaks/ The Stig Speaks?] finalgear.com Posted at 13:17 GMT] Both and Ben Collins have been linked to the role, with "" quoting as stating "OK, there are two Stigs. One is Ben Collins and the other is Darren Turner. How do I know? I'm a racing driver, nothing stays a secret for long in motorsport." [cite news
title= Some say he's Top Gear's true star. We only know he's The Stig
last=Ross
first=Shan
date=March 28, 2008
work=The Scotsman
pages=8]

Collins has also been the subject of online speculation, although he has denied this, stating "those rumours are absolute nonsense" in the "Western Daily Press" newspaper.

The show has alluded to The Stig with drivers that visit the show. In the episode, appeared as the "Star in a Reasonably Priced Car". When asked directly by Clarkson if he was The Stig, Hill played on the fact that he may be The Stig, but then denied it. [cite web
title = Top Gear Videos, Celeb Laps: Damon Hill
work = Topgear.com
url = http://www.topgear.com/content/timetoburn/sections/videos/07/broadband.html
accessdate = 2006-10-08] was interviewed on and at the conclusion of his lap, Clarkson presented him with an "I AM THE STIG" T-shirt.

When former F1 driver appeared on the show, Jeremy Clarkson noted that The Stig theorised that the (the show's "reasonably priced car" at the time) could achieve a 1:44 time on the track. ["Top Gear" Series 7, Episode 5 () Clarkson: "The Stig has always told us, that track would give us a 1:44 in that car, and I thought..."] Mansell proved the Stig's theory by lapping in a time of 1:44.6; The Stig subsequently posted a lap-time of 1:44.4 in the Liana. During the review of 's lap, Clarkson commented that he, as did most of the other F1 drivers, took very different racing lines from The Stig's. Button commented that "...obviously, The Stig isn't a Formula One Driver, then", to which Clarkson replied, "might be." ["Top Gear" Series 8, Episode 8 () Clarkson: "You do that line as well! Formula One drivers all do that and The Stig doesn't!" Button: "Oh really?" Clarkson: "No." Button: "Well obviously, The Stig isn't a Formula One Driver, then." Clarkson: "Might be."]

Although The Stig does talk with celebrities while preparing them for their "Star in a Reasonably Priced Car" lap times, he is never shown talking on screen, and in Top Gear magazine articles he is portrayed as unable or unwilling to talk. Clarkson has written that The Stig is not permitted to talk on screen because any opinion he might voice on cars would be rubbish. [cite web
url = http://driving.timesonline.co.uk/tol/life_and_style/driving/jeremy_clarkson/article2503695.ece
title = Volvo XC70 SE Sport
work =
publisher =
date = 2007-09-23
accessdate = 2007-12-26]

Another source of entertainment for the presenters is the music The Stig listens to whilst doing Power Laps around the Top Gear track. Often a specific genre will be chosen for one or more series. These have included , s, , , , baroque, advertising jingles, foreign language tapes, romantic novels, salesman techniques, the speeches of Margaret Thatcher, and tapes.

The hosts of the show will often introduce footage of The Stig by offering humorous speculations as to his identity, such as "Some say that his voice can only be heard by cats, and that he is banned from the city of . All we know is... he's called The Stig." The introductions often include references to topical news stories. Previously, Stig's name would be used in formal introductions, such as "His Holiness, The Stig!" episode|date=May 2008