Peter Tobin
This article is about the serial killer. For the businessman, see Peter J. Tobin.

Prior to his first murder conviction, Tobin served ten years in prison for a double rape committed in 1993, following which he was released in 2004. In 2007, he was sentenced to life with a minimum of 21 years for the rape and murder of Angelika Kluk in Glasgow in 2006. Skeletal remains of two further young women who went missing in 1991 were subsequently found at his former home in Margate. Tobin was convicted of the murder of Vicky Hamilton in December 2008, when his minimum sentence was increased to 30 years, and of the murder of Dinah McNicol in December 2009. Tobin has been labelled a psychopath by a senior psychologist,[2] and by professor of criminology David Wilson, who also wrote a book on the killer connecting him with the Bible John murders of the late sixties.[3]

Tobin was born in Johnstone, Renfrewshire, the youngest of seven children. He was a difficult child and in 1953, aged seven, he was sent to an approved school. He later spent time in a young offender institution, and in 1970 was convicted and served jail terms in England for burglary and forgery.

In 1969, Tobin moved to Brighton, Sussex, with his 17-year old girlfriend, Margaret Louise Robertson Mountney, a clerk and typist, whom he married on 6 August that year. They split after a year and she divorced him in 1971. In 1973 in Brighton, he married a local nurse, 30-year-old Sylvia Jefferies. They had a son and daughter, the latter of whom died soon after birth. This second, violent, marriage lasted until 1976, when she left with their son. Tobin then had a relationship with Cathy Wilson, who gave birth to a son in December 1987. Tobin married her in Brighton in 1989, when she was 17. In 1990, they moved to Bathgate, West Lothian. Wilson left Tobin in 1990 and moved back to Portsmouth, Hampshire, where she had grown up. All three later gave similar accounts of falling for a charming, well-dressed Tobin who turned violent and sadistic during their marriages. In May 1991, Tobin moved to Margate, Kent, and in 1993, to Havant, Hampshire to be near his younger son.[4][5]

On 4 August 1993, Tobin attacked two 14-year old girls at his flat in Havant, after they called to visit a neighbour, who was not in. They called at Tobin's flat and asked if they could wait there. After holding them at knifepoint and forcing them to drink strong cider and vodka, Tobin sexually assaulted and raped them. He then turned on the gas taps and left them for dead but they both survived the attack. To avoid arrest, Tobin went on the run and hid with a religious sect in Coventry, West Midlands, under a false name. He was later captured in Brighton, after his blue Austin Metro car was found there.[6]

On 18 May 1994, at Winchester Crown Court, Tobin entered a plea of guilty and received a 14-year prison sentence. In 2004, the 58-year-old Tobin was released from prison and moved back to Paisley.[6]

In September 2006, Tobin was working as a church handyman at St. Patrick's Roman Catholic Church in Anderston, Glasgow. He had assumed the name "Pat McLaughlin" to avoid detection, as he was still on the Violent and Sex Offender Register following his 1994 convictions for rape and assault. An arrest warrant had been issued for him in November 2005 after he moved from Paisley without notifying the police, but he was not discovered until he became a suspect in a murder case at the church. In May 2007, he received a further 30-month sentence for breaching the terms of the register.[7][8][9]

Angelika Kluk was a 23-year-old student from Skoczow, near Krakow in Poland. She was staying at the presbytery of St Patrick's Church, where she worked as a cleaner to help finance her Scandinavian Studies course at University of Gdańsk. She was last seen alive in the company of Tobin on 24 September 2006, and is thought to have been attacked by him in the garage attached to St Patrick's presbytery. She was beaten, raped, and stabbed, then her body was concealed in an underground chamber beneath the floor near the confessional in the church. Forensic evidence suggested that she was still alive when she was placed under the floorboards. Police found her body on 29 September,[10] and Tobin was arrested in London shortly afterwards.[11] He had been admitted to hospital under a false name, and with a fictitious complaint.[12]

A six-week trial resulted from the evidence gathered under the supervision of Detective Superintendent David Swindle of Strathclyde Police and took place at the High Court of Justiciary, Edinburgh, between 23 March and 4 May 2007.[13]

The trial judge was Lord Menzies, the prosecution was led by Advocate Depute Dorothy Bain, and the defence by Donald Findlay QC.[14] Tobin denied raping and murdering Kluk and claimed she had consented to have sex with him.

Tobin was found guilty of raping and murdering Kluk and was sentenced to life imprisonment, to serve a minimum of 21 years. In sentencing Tobin, Judge Lord Menzies described him as "an evil man".[15]

In June 2007, Tobin's old house in Bathgate, West Lothian was searched by police in connection with the disappearance of a 15-year-old girl, Vicky Hamilton, who was last seen on 10 February 1991, as she waited for a bus home to Redding, near Falkirk. She had been visiting her older sister, Sharon, in Livingston and was waiting to change buses in Bathgate. The last sighting of her was as she was eating chips on a bench in the town centre. Tobin is believed to have left Bathgate for Margate, in Kent, a few weeks after her disappearance.[16] 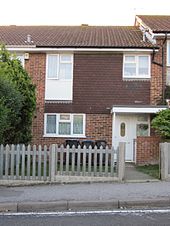 Tobin's house at 50 Irvine Drive, Margate. The bodies of Vicky Hamilton and Dinah McNicol were found in the garden.

On 21 July 2007, Lothian and Borders Police released a statement that they had "arrested, cautioned and charged a male in connection with the matter and a report has been submitted to the Procurator Fiscal", but did not immediately confirm the identity of the man arrested.[17] The investigation later led to a forensic search of a house in Southsea, Hampshire in early October 2007, where Tobin is believed to have lived shortly after leaving Bathgate.[18]

On 14 November 2007, Lothian and Borders Police confirmed that human remains found in the back garden of 50 Irvine Drive,[19] a house in Margate. occupied by Tobin in 1991, were those of Vicky Hamilton.[20]

After a month-long trial, Tobin was convicted of Hamilton's murder on 2 December 2008 at the High Court in Dundee.[21][22]

Tobin was again defended by Donald Findlay QC and the prosecution was led by the Solicitor General for Scotland, Frank Mulholland QC. The prosecution case went beyond the circumstance of Tobin having lived at the two houses in Bathgate and Margate in 1991, and consisted of eyewitness testimony of suspicious behaviour by Tobin at the Bathgate house,[23] evidence to destroy his alibi,[24] and forensic evidence of DNA and fingerprints left on a dagger found in the Bathgate house, on Hamilton's purse and on the sheeting in which her body was wrapped.[25]

"You stand convicted of the truly evil abduction and murder of a vulnerable young girl in 1991 and thereafter of attempting to defeat the ends of justice in various ways over an extended period... Yet again you have shown yourself to be unfit to live in a decent society. It is hard for me to convey the loathing and revulsion that ordinary people will feel for what you have done... I fix the minimum period which you must spend in custody at 30 years. Had it been open to me I would have made that period run consecutive to the 21 year custodial period that you are already serving."[26]

On 11 December 2008, Tobin gave formal notice to court officials that he intended to challenge the guilty verdict and overturn the prison sentence imposed on him. Tobin's defence team was not required to describe the grounds for this appeal until a later date in the appeals process.[27] Tobin did not proceed with his appeal, and it was dropped in March 2009.[28]

Dinah McNicol, an 18-year old sixth former from Tillingham, Essex, was last seen alive on 5 August 1991, hitchhiking home with a male companion from a music festival at Liphook, Hampshire. He was dropped off at Junction 8 of the M25, near Reigate, and she stayed in the car with the driver. She was never seen again. After her disappearance, regular withdrawals of £250 were made from her building society account at cash machines in the UK south coast counties of Hampshire and Sussex, out of character for McNicol, who had told friends and family she intended to use the money in her building society account to travel, or further her education. In late 2007, Essex Police reopened the investigation into her disappearance, following new leads.[29]

On 16 November 2007, a second body was found at 50 Irvine Drive in Margate, later confirmed by police to be that of McNicol.[30]

On 1 September 2008, the Crown Prosecution Service served a summons on Tobin's solicitors, formally accusing him of McNicol's murder, and this trial began in June 2009. The trial was postponed and the jury discharged in July 2009, the judge ruling that Tobin was not fit to stand trial pending surgery.[31] The case resumed on 14 December 2009 at Chelmsford Crown Court.[32] On 16 December 2009, after the defence had offered no evidence, a jury found Tobin guilty of McNicol's murder after deliberating for less than fifteen minutes and Tobin subsequently received his third life sentence, with a recommendation by the judge that his life sentence should mean life.[33] Police are now reopening 'Operation Anagram', to trace Tobin's past movements and his possible involvement in a further 13 unsolved murders which includes the three Bible John victims. Tobin is reported to have claimed 48 victims in boasts made in prison.[34]

The conviction of Tobin has led to speculation that he is Bible John.[35] There are similarities between photographs of Tobin from that era and the photofit artist's impression of Bible John, and Tobin had moved from Glasgow in 1969, the same year as the killings officially ended. It had been alleged that Tobin is driven to violence by the menstrual cycle, something which has long been suspected as the motive behind the Bible John murders.[36] Police have not commented upon any similarities, but said that any surviving forensic evidence will be rechecked.[37] Although DNA had been used to rule out a previous suspect, detectives believe a DNA link to Tobin is unlikely due to a deterioration of the samples through poor storage.[35]

Peter Tobin also had a religious upbringing, as he was forced to attend Mass every day by his parents. Bible John was heard by Helen Puttock's sister referring to the Bible. Another similarity is that eye-witnesses told police that the suspect had one tooth missing in his upper-right area of the mouth; Dental Records proved that Peter Tobin had a tooth removed around the late 1960s.