Chelsea is a municipality located immediately north of Gatineau, Quebec, Canada and about 7 miles north of Ottawa. Chelsea is located within Canada's National Capital Region. In 2006 the population was 6,703.

Chelsea is a triangle-shaped municipality that includes much of the southern and eastern parts of Gatineau Park, and is bordered on the east by the Gatineau River. The southern border is 5 km south of Old Chelsea, and it runs north to the community of Farm Point. Beyond Farm Point lies the municipality of La Pêche and the village of Wakefield. It is the seat of Les Collines-de-l'Outaouais Regional County Municipality.

The municipality has a reputation for being environmentally responsible and was one of the first in Canada to ban the use of pesticides. While 60% of the area of the municipality consists of Gatineau Park, much of the rest of Chelsea is residential with mostly large lots, and tracts of undeveloped land. It has a distinctly rural feel. The population of Chelsea is almost evenly divided between anglophones and francophones and both English and French languages are in common use throughout the town.

Chelsea is named after the New-Vermont town of its first settler, Thomas Brigham. The name has been in use since the early 19th century: Old Chelsea (1819), Parish Saint-Stephen-of-Chelsea (1835), Chelsea (circa 1870).

Part of the film Grey Owl was filmed on the Gatineau River. A number of regionally and nationally well-known musicians, filmmakers and artists live in Chelsea, including Ian Tamblyn, Richard Austin, Mike Beedell, Christiane Claude, Rebecca Mason, daughter of filmmaker and naturalist Bill Mason, and Reid McLachlan, among others. 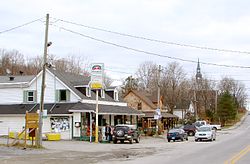