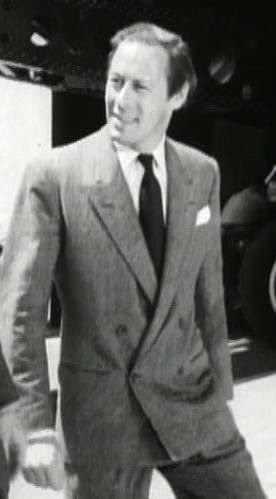 Harrison was born in , then part of , and educated at . [ [http://www.filmreference.com/Actors-and-Actresses-Ha-Hu/Harrison-Sir-Rex.html www.filmreference.com] ] He first appeared on the stage in 1924 in . Harrison's acting career was interrupted during whilst he served in the , reaching the rank of . [http://www.foxhome.com/myfairlady/not/scn2/make2.htm] He acted in various stage productions until 11 May 1990. He acted in the West End of when he was young, appearing in the play "French Without Tears", which proved to be his breakthrough role.

He alternated appearances in London and New York, winning a for his appearance as in "" and international superstardom (and a second ) for his Henry Higgins in the musical "". Later appearances included 's 's "", a 1984 appearance at the with in 's "," and also on Broadway at the Brooks Atkinson Theatre presented by , at the Haymarket in 's "" with Edward Fox. He revived his Henry Higgins in a highly paid revival of "" in 1981, cementing his association with the plays of which included a Tony nominated performance as Shotover in "", in "," and General Burgoyne in a production of ""...

Harrison's film debut was in "The Great Game" (1930), and other notable early films include "The Citadel" (1938), "" (1940), "Major Barbara" (1941), "Blithe Spirit" (1945), "" (1946), "" (1947), and "" (1947). He was best known for his portrayal of Professor Henry Higgins in the musical "My Fair Lady", based on the play "Pygmalion", especially after he reprised the role in the 1964 film version, for which he won a Best Actor Oscar. The 1956 cast album set sales records at the time. He revived the role on stage in the early 1980s. He also starred in 1967's "Doctor Dolittle". Harrison was not by general terms a singer; thus, the music was generally written to allow for long periods of recitative, generally identified as "speaking to the music". Although excelling in High Comedy (Noel Coward said "Rex Harrison is the greatest interpreter of high comedy in the world ... next to Me!"citequote), he attracted favourable notices in dramatic roles such as his portrayal of in "Cleopatra" (1963) and as in "The Agony and the Ecstasy" (1965), opposite as . He also appeared as an aging man opposite as his lover in "Staircase". He also acted in a movie Shalimar alongside the Indian Superstar .

Harrison's elder sister Sylvia married into the British aristocracy, and was a Vice Charirman of the British Conservative Party in the 1950s.

Harrison was married six times. In 1942 he divorced his first wife, Colette Thomas, and married actress the next year; the two later appeared together in numerous plays and films, including "". After several years in film, he achieved wide acclaim starring in the adaptation of 's "" (1945). He followed that with his first major American film, starring as King in "". 1947 saw the release of the classic "" opposite .

In 1947, while married to Palmer, Harrison began an affair with , a fact that eventually became public knowledge. Hollywood blamed Harrison for Landis's 1948 suicide and the scandal resulted in him losing his contract with Fox.Fact|date=December 2007 Harrison and Palmer divorced in 1957. He soon remarried, to actress . He was subsequently married to Welsh-born Rachel Roberts, who, like Landis, later committed suicide by taking sleeping pills. Harrison then married and, finally, Mercia Tinker, who would become his widow in 1990.

On 25 July 1989, he was ed by Queen Elizabeth II at Buckingham Palace, while an orchestra played the music of songs from "".

Having retired from films in the late 1970s, he had continued to act on Broadway until the very end, despite suffering from , painful teeth and a failing memory. In 1990 he was appearing on Broadway in The Circle by , opposite and , when he fell ill. [ [http://theater2.nytimes.com/mem/theater/treview.html?_r=1&res=950DE0DD133DF932A15752C1A96F948260&oref=slogin Rex Harrison Back on Broadway] ] It was discovered that he had but had been unaware of it, and he died peacefully three weeks later in at the age of 82, causing the show to end prematurely.