Murder, My Sweet is a 1944 American film noir directed by Edward Dmytryk, and starring Dick Powell, Claire Trevor, and Anne Shirley.[1] The film was released in the United Kingdom under the title Farewell, My Lovely, which is the title of the 1940 Raymond Chandler novel it is based on, and also the film's original American title.

Detective Philip Marlowe (Dick Powell) is hired by hulking Moose Malloy (Mike Mazurki) to locate his old girlfriend that he lost track of while serving time in prison. With each lead he follows, Marlowe encounters lies, larceny, perjury, theft and a beautiful femme fatale (Claire Trevor).

The film was first screened on December 18, 1944 in Minneapolis, Minnesota with the title Farewell, My Lovely. It opened in New York City, however, on March 8, 1945, as Murder, My Sweet.[2]

Dick Powell was previously known (1930s and early 1940s) for light comedies and musicals, so the casting of him as Chandler's hard-boiled private detective antihero was a surprise to audiences. The studio executives changed the title from Farewell, My Lovely because they believed audiences would think the film was a musical. Powell's performance is much debated by fans of Chandler and film noir; some think it too light and comic; others consider it the best interpretation of Philip Marlowe on film.[3] 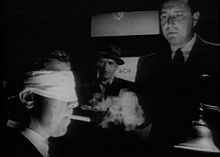 Murder, My Sweet is considered one of the best Chandler adaptations. Glenn Erickson, in a recent review of the film, wrote, "Murder, My Sweet remains the purest version of Chandler on film, even if it all seems far too familiar now."[4]

It is also considered one of the pre-eminent film noirs. Alison Dalzell, writing for the Edinburgh University Film Society notes, "Of all the adaptations of Chandler novels, this film comes as close as any to matching their stylish first person narrative and has the cinematic skill and bravado of direction to carry it off. Since the '40s countless mystery and neo-noir films have been made in Hollywood and around the world. Murder, My Sweet is what they all aspire to be."[5]

According to film critics Ellen Keneshea and Carl Macek, the picture takes Chandler's novel and transforms it into a "film with a dark ambiance unknown at [the] time." Dymytryk was able to transcend the tough dialogue and mystery film conventions by creating a "cynical vision of society." As such, the film enters the world of film noir.[6]

When the film was released in its day, Bosley Crowther, the film critic for The New York Times, appreciated the adaptation of Chandler's novel and lauded the acting, writing, "Practically all of the supporting roles are exceptionally well played, particularly by Mike Mazurki, the former wrestler, as the brutish Moose Malloy; Otto Kruger as Jules Amthor, quack-psychologist and insidious blackmailer; Anne Shirley as an innocent among the wolf pack, and Don Douglas as the police lieutenant. In short, Murder, My Sweet is pulse-quickening entertainment."[7]

The staff at Variety magazine also gave the film kudos, writing, "Murder, My Sweet, a taut thriller about a private detective enmeshed with a gang of blackmailers, is as smart as it is gripping...Performances are on a par with the production. Dick Powell is a surprise as the hard-boiled copper. The portrayal is potent and convincing. Claire Trevor is as dramatic as the predatory femme, with Anne Shirley in sharp contrast as the soft kid caught in the crossfire."[8]

The Chandler novel has been filmed once before, in 1942, as The Falcon Takes Over, directed by Irving Reis, part of a film series which featured George Sanders, as The Falcon.[9] In 1975 the story was remade as Farewell, My Lovely, featuring Robert Mitchum as Marlowe and directed by Dick Richards.[10]

The film version of Murder, My Sweet was dramatized as an hour-long radio play on the June 11, 1945 broadcast of Lux Radio Theater, starring Dick Powell and Claire Trevor in their original film roles.

TNT showed it as a Turner Colorized Classic.