Kismayo or Kismayu (Somali: Kismaayo; Arabic: كيسمايو‎, Kīsmāyū; Italian: Chisimaio) is a port city in the Jubbada Hoose province of Somalia. It is the commercial capital of the autonomous Jubaland region.

The town is situated 328 miles (528 km) southwest of Mogadishu, near the mouth of the Jubba River, where the waters empty into the Indian Ocean. As of 2011, the local population is estimated at 183,300 inhabitants.[1]

During the Middle Ages, the influential Somali Ajuuraan State held sway over the territory, followed in turn by the Geledi Sultanate. From 1836 until 1861, Kismayo and other parts of Jubaland were claimed by the Sultanate of Muscat (now in Oman), and were later incorporated into British East Africa. In 1925, Jubaland was ceded to Italy, forming a part of Italian Somaliland. On 1 July 1960, the region, along with the rest of Italian Somaliland and British Somaliland, became part of the independent republic of Somalia.

More recently, Kismayo has been the site of numerous battles in the ongoing[update] Somali Civil War. In late 2006, Islamist militants gained control of most of the city. To reclaim possession of the territory, a new autonomous regional administration dubbed Azania was announced in 2010 and formalized the following year.

Flag of the Ajuuraan State, an influential Somali empire that held sway over the Kismayo and the larger Jubaland region during the Middle Ages.

The Kismayo area was originally a small fishing settlement.[2]

During the Middle Ages, the region came under the rule of the influential Ajuuraan State, which utilized the Jubba River for its plantations.

After the collapse of this polity, the House of Gobroon was established and the Geledi Sultanate held sway over the area. The dynasty reached its apex under the successive reigns of Sultan Yusuf Mahamud Ibrahim, who successfully consolidated Gobroon power during the Bardera wars, and Sultan Ahmed Yusuf, who forced regional powers such as the Omani Empire to submit tribute.

In the latter half of the 19th century, Somali pastoralists from the northern Harti Darod clan settled in Kismayo's interior. The city subsequently evolved into a major hub of the livestock trade.[2]

From 1836 until 1861, Kismayo and other parts of Jubaland were claimed by the Sultanate of Muscat (now in Oman), when the new Sultanate of Zanzibar was split from Muscat and Oman and given control of its East African territories.

On 7 November 1890, Zanzibar became a British protectorate, and on 1 July 1895, the Sultanate ceded all of its coastal possessions in continental East Africa to Britain. Together with the Zanzibar Sultanate's other former possessions in the area, Jubaland became part of the British East Africa colony.

The territory was subsequently ceded to Italy, purportedly as a reward for the Italians having joined the Allies in World War I, and had a brief existence as the Italian colony of Trans-Juba (Oltre Giuba).

Following the breakdown of central authority that accompanied the civil war in 1991, various local militias fought for control of the city, including supporters of Mohammed Said Hersi ("General Morgan") and Col. Omar Jess' Somali Patriotic Movement (SPM). In March 1993, a United States Marine amphibious group arrived in the city in an attempt to keep the peace as part of the United Nations intervention in Somalia. By December 1993, General Morgan's troops controlled Kismayo, despite the presence of peacekeepers. The last UN troops left the city in December 1994.[3]

The Kismayo panorama just prior to the civil war.

General Morgan briefly declared Jubaland independent on September 3, 1998.[4] Political opponents of his subsequently united as the Allied Somali Forces (ASF), seizing control of Kismayo by June of the following year.[5] Led by Colonel Barre Adan Shire Hiiraale, the ASF administration renamed itself the Juba Valley Alliance in 2001.[6] On June 18 of that year, an 11-member inter-clan council decided to ally the JVA with the newly-forming Transitional Federal Government.[7]

In 2006, the Islamic Courts Union (ICU), an Islamist organization, assumed control of much of Jubaland and other parts of southern Somalia and promptly imposed Shari'a law. The Transitional Federal Government sought to re-establish its authority, and, with the assistance of Ethiopian troops, African Union peacekeepers and air support by the United States, managed to drive out the rival ICU and solidify its rule.[8]

On January 8, 2007, as the Battle of Ras Kamboni raged just south of Kismayo, the TFG relocated from its interim location in Baidoa to the nation's capital, Mogadishu. This marked the first time since the fall of the Siad Barre regime in 1991 that the federal government controlled most of the country.[9]

Following this defeat, the Islamic Courts Union splintered into several different factions. Some of the more radical elements, including Al-Shabaab, regrouped to continue their insurgency against the TFG and oppose the Ethiopian military's presence in Somalia. Throughout 2007 and 2008, Al-Shabaab scored military victories, seizing control of key towns and ports in both central and southern Somalia. By January 2009, Al-Shabaab and other militias had managed to force the Ethiopian troops to retreat, leaving behind an under-equipped African Union peacekeeping force to assist the Transitional Federal Government's troops.[10]

A new municipal district administration was established on 6 September 2008. Its members reportedly represented the ICU and Al-Shabaab (three members each) in addition to a local clan (one member) which had played a part in the military assault.[11] Representatives of the Islamic Courts Union questioned the legitimacy of the authority.[12] On 1 October 2009, Al Shabaab took full control of the city, after Sheikh Ahmed Madobe, a senior commander of Ras Kamboni Brigade (then a part of Hizbul Islam), challenged Al Shabaab's control.[13]

Modern Kismayo is inhabited by a diverse group of people. Besides Somalis, the city also has many Benadiri, Bantu, Bravanese, Bajuni and Indian residents, among others.

Being Somalia's third largest city, Kismayo is home to a large population, which is served by a number of local high schools, skills training centers and institutions of higher education. Kismayo University, established in August 2005, is located about 1 km north, along the Kismayo-Mogadishu main road.[14]

Before the war, there were a meat-tinning factory, as well as a tannery, and a modern fish factory. There were also two sugar refineries, one at Jowhar and another situated near Jilib[17] As of January 2007, the market was bustling, although the city's infrastructure had incurred considerable damage.[18] 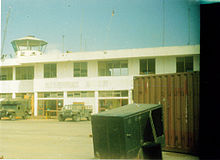 Kismayo's air transportation needs are served by Kismayo Airport, which is situated about 10 km from the city. It was formerly a Somali Air Force training base. Following the outbreak of the civil war, the airport was closed down for a period of time and its infrastructure was significantly damaged. However, the facility was re-opened in October 2008 by the Islamic Courts Union after undergoing some renovations.[19] That same year, the airport was also renamed after Imam Ahmed Gurey, a 16th century Somali military leader.[20]

Kismayo's large docks are situated on a peninsula on the Indian Ocean coast. Formerly one of the Bajuni Islands, the peninsula was subsequently connected by a narrow causeway when the port was built, with United States assistance, in 1964. The port served as a base for the Somali Navy as well as the Soviet Navy after the military coup in Somalia in 1969.[21] The United States and Somalia jointly refurbished the port in 1984 after "extensive deterioration of the 2,070-foot-long (630 m) four-berth, marginal wharf at the Port of Kismayo necessitated a major rehabilitation to maintain operations."[17]

Kismayo is divided into four degmo, or districts, of which Calanleey is the oldest:

The city of Kismayo is located in the fertile Juba Valley, and is known for its clean and beautiful beaches and tropical weather. The climate is hot year-round, with seasonal monsoon winds and irregular rainfall with recurring droughts. The gu rains, also known as the Southwest Monsoons, begin in April and last until June, producing significant fresh water and allowing lush vegetation to grow. The gu season is followed by the hagaa (xagaa) dry season.