The Treaty of Zgorzelec (Full title The Agreement Concerning the Demarcation of the Established and the Existing Polish-German State Frontier, also known as the Treaty of Görlitz and Treaty of Zgorzelic) between the Republic of Poland and East Germany (GDR) was signed on 6 July 1950 in Polish Zgorzelec, until 1945 the eastern part of the divided city of Görlitz. 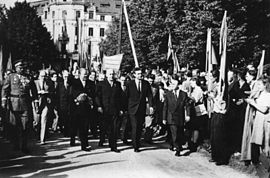 Grotewohl (l.) and Cyrankiewicz walking to the Zgorzelec community centre to sign the treaty

The agreement was signed under Soviet pressure by Otto Grotewohl, prime minister of the provisional government of the GDR (East Germany) and Polish premier Józef Cyrankiewicz. It recognized the Oder-Neisse line implemented by the 1945 Potsdam Agreement as the border between the two states.[1] The terms referred to the "defined and existing border" from the Baltic Sea west of Świnoujście - however without mentioning Szczecin - along the Oder and Lusatian Neisse rivers to the Czechoslovak border. Thereby the East German government also accepted the division of Küstrin, Frankfurt (Oder), Guben and Görlitz.

The treaty was worded as a declaration and was not recognised as a legitimate international treaty by West Germany insisting on its exclusive mandate and the members states of the NATO. Four years later when the Soviet Union granted East Germany independence,[2] the Soviet Union reserved rights over East Germany (similar to the rights reserved by the Western Allies over the West Germany under the Bonn–Paris conventions) pending a final peace treaty with Germany - the later Treaty on the Final Settlement with Respect to Germany. So although the treaty was binding on the two states it was not seen by many western members of the international community as a definitive.[1] The West German government stressed the status of the territories east of the Oder-Neisse-line being "under Polish and Soviet administration" until in 1970 Chancellor Willy Brandt by signing the Treaty of Warsaw de facto acknowledged the border.

The community centre in which the treaty was signed is one of Zgorzelec's main sights and is found in a park beside the road bridge border crossing.