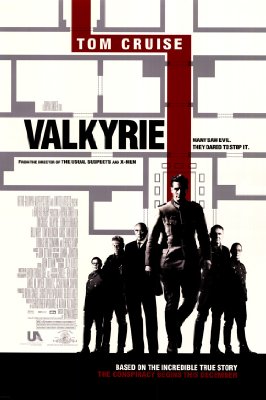 
"Valkyrie" is a 2008 historical thriller film directed by and starring . The film is based on the of German army officers to assassinate and marks the re-teaming of Singer and producer/screenwriter . Cruise will portray the leader of the plot, Colonel . Cruise's casting caused controversy among German politicians and members of Stauffenberg's family due to the actor's practice of , though German newspapers and filmmakers gave support to the film to spread global awareness of von Stauffenberg's attempted plot. The filmmakers of "Valkyrie" initially had difficulty setting up filming locations in Germany, but they were later given leeway to film in locations pertaining to the film's story, such as Berlin's historic . The release date for "Valkyrie" has changed numerous times, including a brief move to February 14, 2009. After several positive test screenings, the film's release was moved up to December 26, 2008.

During , German Colonel (Cruise) is severely wounded in Africa and returns home to . Stauffenberg helps conceive , a plan approved by which, in order to manage turmoil within Germany, would implement a in the event of the Nazi 's death. The Colonel eventually joins the and becomes part of the , a conspiracy to assassinate Hitler and execute "Valkyrie" in order to take control of the country and make peace with the Allies. Stauffenberg finds himself taking on not only the responsibility of leading the coup, but also the task to assassinate Hitler himself.

* as Claus von Stauffenberg, a German World War II colonel and Catholic aristocrat who leads the plot to assassinate . Describing Stauffenberg's heroism, Cruise said "I thought of it in terms of what Stauffenberg represents. He was someone who realized that he had to take the steps that ultimately cost him his life... He recognized what was at stake." Stauffenberg lost his left eye, right hand and two fingers on his left hand in an Allied attack in Tunisia, so Cruise affected the same disabilities to practice dressing, moving items and writing.

After director completed the three major productions "X-Men" (2000), "X2" (2003) and "" (2006), he sought a smaller project before embarking upon the (eventually aborted) Superman sequel. [cite news | author=Scott Chitwood | title=Exclusive: Singer on "Superman" Sequel & DVD | work= | date=2006-07-22 | url=http://www.superherohype.com/news/featuresnews.php?id=4542 | accessdate=2007-05-22] In late 2006, Singer learned that screenwriter had developed a World War II screenplay with . Set in Nazi Germany, it was framed as a thriller that would be a multi-character ensemble piece. Singer expressed interest in directing and McQuarrie suggested they bring the project to partners and , who immediately agreed to finance the film in March of 2007. [cite news | author=Michael Fleming | url=http://www.variety.com/article/VR1117961116.html?categoryid=13&cs=1 | title=United Artists grabs Singer thriller | work=Variety | date=2007-03-13 | accessdate=2007-04-09 ] The script is based on the actual events of German generals plotting to assassinate during . Singer invited Tom Cruise to take the lead role, which Cruise accepted. [cite news | author=Michael Fleming | url=http://www.variety.com/article/VR1117961510.html?categoryid=13&cs=1 | title=Cruise set for Singer's WWII film | work=Variety | date=2007-03-20 | accessdate=2007-04-09 ] Cruise had been provided a picture of Stauffenberg, in which the actor noticed a similarity in his profile with the German colonel, drawing him to the role. [cite news | author=Karen Nickel Anhalt | url=http://www.people.com/people/article/0,,20053989,00.html | title=Tom Cruise Breaks Silence Over German Film | work=People | date=2007-08-30 | accessdate=2007-09-14 ]

The producers of "Valkyrie" expressed interest in filming at , a memorialized location where Stauffenberg and his comrades had plotted to assassinate Hitler. Germany's Finance Ministry had originally denied the producers the right to film at Bendlerblock, explaining that the site should be treated as a "place of remembrance and mourning" which would "lose dignity if we were to exploit it as a film set". The producers were also denied a request to film at a Berlin police station by the department, citing adverse impact to the facility.

Before filming the scene of Stauffenberg's execution at Bendlerblock, Tom Cruise led the cast and crew in holding a , [cite news | author= | url=http://www.dw-world.de/dw/article/0,2144,2795103,00.html | title=Tom Cruise Marks Disputed Filming With Moment of Silence | work= | date=2007-09-24 | accessdate=2007-11-08 ] "out of respect for the place and out of respect for the life achievement of these people who were executed there," according to actor . [cite news | author= | url=http://www.lifetimetv.com/lifestyle/entertainment/tom-cruise-pays-respects-anti-hitler-heroes | title=Tom Cruise Pays Respects to Anti-Hitler Heroes | work= | date=2007-09-23 | accessdate=2007-11-08 ] After filming of the scene was completed, the footage was sent to be developed for the post-production process at a processing plant in Germany. The wrong chemical was accidentally used in development, damaging the film and requiring the crew to seek permission from the government to re-shoot the scenes. Permission was granted and a spokesman for the film indicated the schedule and budget had not been affected. [cite news | author= | url=http://film.guardian.co.uk/news/story/0,,2186853,00.html | title=Cruise's Valkyrie suffers new setback | work= | date=2007-10-09 | accessdate=2007-11-08 ] [cite news | author= | url=http://news.bbc.co.uk/1/hi/entertainment/7037105.stm | title=Technical setback for Cruise film | work= | date=2007-10-10 | accessdate=2007-10-10 ]

After the production was unable to find a suitable location for the key battle sequence at the beginning of the film set in North Africa, in which von Stauffenberg loses his eye and hand, production was halted while locations were scouted. In April 2008, Singer was reported to film the desert sequences in the coming two months, possibly in the United States.

The film's are being created by . [cite news | url=http://www.hollywoodreporter.com/hr/content_display/news/e3ie4014cd99a43c45eb9d280d73cb9236d | title=G-Force' is with Imageworks | author=Carolyn Giardina | work= | publisher=The Nielsen Company | date=2008-07-01 | accessdate=2008-07-01 ] In the post-production process, editor and composer edited the film without a . Ottman originally planned to compose a minimal score to "Valkyrie", but found that despite the film's dialogue-heavy nature, the film needed music to create a thriller atmosphere. Ottman described the new approach, "It's very much like "Usual Suspects" &ndash; in order to keep the tension going in a scene where there's really a lot of dialogue, we had to rely on a lot of score. But the score is done in a very sort of pulsating, subliminal way. It's not an expository score, it's more like a running pulse going through the movie." [cite news | first=Kevin | last=Cassidy | url=http://www.reuters.com/article/entertainmentNews/idUKN3039794720080731 | title=Frustrated music lovers have a score to settle | work= | publisher= | date=2008-07-31 | accessdate=2008-08-06 ]

Quote_box|width=40% |align=right |quote=Stauffenberg played an important role in the military resistance against the Nazi regime and in the [German military's] self-perception [...] A sincere and respectable depiction of the events of the 20th of July and of Stauffenberg is therefore very much in Germany's interest. Tom Cruise, with his Scientology background, is not the right person for this.|source=&mdash;German Defense Ministry Spokesperson Harald Kammerbauer, June 2007.In June 2007, prior to production, a German Defense Ministry spokesperson said that filming of "Valkyrie" would not be allowed at the country's military sites if protagonist Colonel Claus von Stauffenberg was portrayed by , due to the actor's adherence to , which has been labeled a dangerous cult by the German authorities. The spokesperson further indicated that the ministry had not at that time received official filming requests from "Valkyrie"'s producers.

Quote_box|width=40% |align=left |quote=Some of the family have spoken out because they don't think it will do the story justice and others don't think the casting is ideal, but I totally disagree, especially after I met Tom and saw how he is approaching the role with such professionalism. I think most of the family are curious to see the finished film.|source=&mdash;Philipp von Schulthess, grandson of Colonel von Stauffenberg, September 2007. The film subsequently found some local support in Germany. Director considered Cruise's involvement would promote awareness of a neglected story, and veteran German actor also gave his support to the production.

A spokesperson for Scientology in Berlin, Sabine Weber, said in August 2007 that she was "shocked" by German politicians' criticisms, adding that it was a "call to discrimination" against someone based on their religious beliefs. [cite news | author=David Rising | url=http://www.orlandosentinel.com/entertainment/orl-cruisegermany07aug28,0,6288410.story | title=Risky business? Cruise cast as German war hero | work= | date=2007-08-28 | accessdate=2007-09-14 ] In the same month, Cruise suggested to his critics that they see the film before denouncing it. [cite news | author= | url=http://www.spiegel.de/international/zeitgeist/0,1518,502889,00.html | title='I Bear a Great Responsibility to Stauffenberg' | work= | date=2007-08-30 | accessdate=2007-09-14 ] In October 2007, fellow "Valkyrie" actor said that the issue had been "largely exaggerated" and that the German official who initially incited the complaints contacted the production one week into filming to apologize, after reading the script and realizing he had misinterpreted the film's plot.

In November 2007, the head of the German Resistance Memorial Center warned against any potential "myth formation" around von Stauffenberg as a result of the film, urging that any understanding of the Colonel must also be informed by the fact that he had been loyal to the Nazi cause for most of his military career. [cite web | url=http://www.spiegel.de/international/germany/0,1518,517804,00.html | author= | title=The 'Myth' of the Would-Be Hitler Assassin | work = | date=2007-11-16 | accessdate=2007-11-18 ] In the same month Cruise was given a Bambi courage award, presented by German media company , "for tackling a story that had never been covered by Hollywood before". [cite news | url=http://news.bbc.co.uk/1/hi/entertainment/7120625.stm | title=Cruise wins German courage prize | work= | date=2007-11-30 | accessdate=2007-12-03 ]