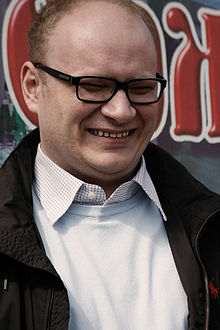 Kashin graduated from the Baltic State Fishing Fleet Academy with a degree in sea navigation in 2001. While studying, he wrote for Komsomolskaya Pravda in Kaliningrad where he expressed rather sharp views. He continued to work for that newspaper up to 2003, specializing on exclusive interviews and special reports,[2] then moved to Moscow and started working as a journalist for Komsomolskaya Pravda in Moscow. After a while he left the newspaper, became a staff writer at Kommersant and became the leading Russian journalist covering youth political movements, ranging broadly from NBP to Nashi. He left Kommersant in June 2005, dissatisfied with the dismissal of the director-general Andrei Vassiliev.[2] After leaving Kommersant, he worked for various media including Russian Magazine, Big City, Limonka, Izvestia, Your Day, Globalrus, Re:action, Expert and Vzglyad in Moscow.

Kashin reported on a number of force majeure events, including the death of Maskhadov, the destruction of hens infected with avian influenza in Novosibirsk Oblast and the burial of rescuers who died during the Beslan school hostage crisis. He was detained by militia and beaten several times while fulfilling his journalist duties.[1] He considered the political situation in Russia to be poor as there were many people sharing liberal values but no 'normal' right party nor any slightly 'left' social-democratic party, which he saw as a consequence of the surge of PR in Russia. When asked to give an estimate of the Russian authorities, Kashin said it was difficult because they are not uniform.[2] In a 2006 interview, Kashin said, "Hopefully, the last year forced all our people in the Kremlin to realize that if they would remain swines, they will be swept by 'orange surge'.[2] Kashin said of the Russian authorities and media that there was freedom of speech but on the other side, media are allowed to "stick to the most base instincts of audience to enhance ratings, in exchange for political loyalty."[2] He said that the Russian authorities are self-confident and "cease to think that there is such thing as media between authorities and society", an erroneous position that arose from the servient role of the media during the 1999 and 1996 elections or even during Perestroika,[citation needed][3] and believes that the future of Russia is in need of energetic leadership.[2]

In 2007 Kashin became a regular author and a deputy editor of the Russian Life magazine.[4] In 2009, Kashin returned to Kommersant as a special correspondent.[5]

On October 6, 2006 Oleg Kashin published the article "Brightness and expression of virtual GULAG" viewing controversy about the site "The Chronicles of Hell",[6] in which he drew the conclusion that Russian liberal mindset allows the "lie for the profits of the deal", illustrating his claim with the words said by Russian journalist Andrei Babitsky in December 1999 about Chechen fighters cutting throats of Russian soldiers before cameras: "just in that way they are trying to make the war more expressive, visible, bright".[7][8]

Kashin in the article devoted to the murder of Russian journalist Anna Politkovskaya on October 9, 2006, called Politkovskaya "Newsmaker, rather than a journalist, moreover, newsmaker of a strange kind, God's fool, standing in one row with Valeriya Novodvorskaya[9] and Viktor Anpilov." Kashin made a point that in modern Russia "there is no such horrid truth, for which a journalist can be killed", because, according to Kashin, critique makes no impression on authorities: they just do not notice it.[10]

Considering case of Andrey Sychev, which caused dire resonance in Russian society (in which a young conscript lost his legs and genitalia due to disease triggered by dedovschina), and made the negative imprint on reputation of the contemporary Minister of Defense Sergey Ivanov, Oleg Kashin made a point that the case was largely fabricated:

"The only proven episode... is that Sychev squatted for a while in front of now imprisoned junior sergeant Sivyakov.... All the other stuff was thought up by the chairman of Chelyabinsk Committee of Soldiers Mothers Lydmila Zinchenko, who, after giving a dozen of interviews to liberal media now cowardly conceals from investigators."[11] 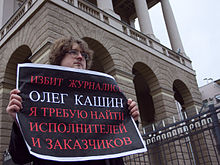 On November 6, 2010, Kashin was assaulted by unknown attackers near his home in Moscow.[12] He was hospitalized with several fractures.[13] Police are treating the attack as attempted murder.[14] President Medvedev has said that the assailants "must be found and punished".[14] Prior to the attack Kashin had been reporting on the proposal to build a highway through the Khimki forest near Moscow.[14] His reporting covering youth political movements and political protests had also prompted aggressive responses from many pro-Kremlin groups, including the Young Guard of United Russia, a youth group associated with the United Russia political party, chaired by Vladimir Putin.[15]