Devaneya Pavanar (ஞா. தேவநேயப் பாவாணர்; Ñānamuttaṉ Tēvanēya Pāvāṇar; also known as G. Devaneyan, Ñanamuttan Tevaneyan; lived 1902–1981), was a prominent Indian Tamil author who wrote over 35 books. Additionally, he was a staunch proponent of the "Pure Tamil movement" and initiated the Etymological Dictionary Project primarily to bring out the roots of Tamil words and their connections and ramifications.

In his 1966 Primary Classical language of the World, he argues that the Tamil language is the "most natural" (iyal-moḻi) and also a proto-world language, being the oldest (tol-moḻi) language of the world, from which all other major languages of the world are derived. He believed that its literature, later called Sangam literature and usually considered to have been written from 200 BCE and 300 CE, spanned a huge period from 10,000 to 5,500 BCE.[1] These datings gain popularity by modern pseudo-historians such as in Graham Hancock's book Underworld: The Mysterious Origins of Civilization. His above ideas are fringe ones and mainstream linguists, geologists and historians do not acknowledge them to be true.

Gnanamuthu Devaneyan Pavanar was born on 7 February 1902 in Sankaranayinar Koil(sankarankovil), Tamil Nadu to his parents Thiru.Gnanamuthu Devendrar and Paripuranam Ammaiyar. He was educated in the C.M.J. High School, Palayankottai, S.S.L.C. (1916–1918) and trained as a teacher in Madras University. He married in 1930 and had four sons and one daughter, the daughter being the fourth child.

He worked as a Tamil teacher in several High Schools, 1922-1944. During this time, he pursued autodidactic studies of Dravidian philology and comparative linguistics.

He was Tamil professor at Municipal College, Salem, 1944-1956. From 1956-1961, he was the head of Dravidian department at Annamalai University.[3] He was a member of the Tamil Development and Research Council, set up by the Nehru government in 1959, entrusted with producing Tamil school and college textbooks. From 1974, he was director of the Tamil Etymological Project, and he acted as president of the International Tamil League, Tamil Nadu. (U. Tha. Ka.)

Views on Tamil versus Sanskrit 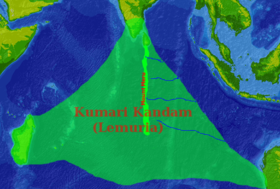 "Lemuria" according to Pavanar, connecting Madagascar, South India and Australia (covering most of the Indian Ocean). Mount Meru stretches southwards from Sri Lanka.

Pavanar's Vadamoli Varalaru argues that hundreds of Sanskrit words can be traced to a Tamil origin, and at the same time he insisted that pure Tamil equivalents existed for Sanskrit loan words. He claimed that Tamil is a "superior and more divine" language than Sanskrit. In his view the Tamil language originated in "Lemuria" (இலெமூரியா Ilemūriyā), the cradle of civilization and place of origin of language. He believed that evidence of Tamil's antiquity was being suppressed by Sanskritists.

Pavanar's timeline for the evolution of mankind and Tamil is as follows:

In the preface to his 1966 book The Primary Classical Language of the World he wrote:

There is no other language in the whole world as Tamil, that has suffered so much damage by natural and human agencies, and has been done so much injustice by malignant foreigners and native dupes. The general belief that all arts and sciences are progressively advancing with the passage of time, is falsified in the case of philology, owing to the fundamental blunder of locating the original home of the Tamilians in the Mediterranean region, and taking Sanskrit, a post-Vedic semi-artificial composite literary dialect, the Indian Esperanto, so to speak, for the prototype of the Indo-European Form of Speech. Westerners do not know as yet, that Tamil is a highly developed classical language of Lemurian origin, and has been, and is being still, suppressed by a systematic and co-ordinated effort by the Sanskritists both in the public and private sectors, ever since the Vedic mendicants migrated to the South, and taking utmost advantage of their superior complexion and the primitive credulity of the ancient Tamil kings, posed themselves as earthly gods (Bhu-suras) and deluded the Tamilians into the belief, that their ancestral language or literary dialect was divine or celestial in origin.

In a chapter entitled Tamil more divine than Sanskrit, Pavanar gives the reasons why he judges Tamil to be "more divine" than Sanskrit, arguing for "Primary Classicality of Tamil", he enumerates:

His claims regarding the "Primary Classicality of Tamil":

Pavanar was considered by his followers to be a groundbreaking scholar in Dravidology with political leanings towards Dravidian nationalism. He does figure in works on language activism and national mysticism (Ramaswamy 1997, 2004) and of Indian nationalism (Kaiwar et al. 2003). In the foreword to the to the 2001 reprint of Primary Classical Language of the World, Pavanar's assistant and disciple R. Madhivanan claims that

and continues into a eulogy to the effect that

M. Tamil Kudimagan, Ex-Minister for Tamil Development, Govt. of Tamil Nadu. Madurai, in the preface to the same volume, writes that "We are the followers of Pavanar and we are implementing the ideals of Pavanar in all walks of life". V. Perumal compared Pavanar with English scholar Johnson:

The Cultural Heritage of India; vol. V: Languages and literature, p. 641 (ed. Chatterji, The Ramakrishna Mission, Institute of Culture, 1978) states that "but for his (Pavanar's) efforts the purity and antiquity of Tamil might have been a myth."

"To publish the translated but not yet published Sattambi Swamigal's Adhibhasa which seeks to establish that Tamil is the most ancient language. When published, it will provide an impetus to Pavanar's findings"

The literary works and books of Pavanar have been "nationalised" by the Government of Tamil Nadu in the course of the "Golden Jubilee year of National Independence" (2006). This means that the copyright for Pavanar's work is now owned by the state of Tamil Nadu, his legal heirs having been compensated financially.[6][7]