Desmarest's Hutia, Capromys pilorides, also known as the Cuban Hutia, is a species of hutia endemic to Cuba. Growing to 60 cm (24 in), it is the largest of the extant hutia species, and is abundant throughout its range.

Desmarest's Hutia ranges in size from 20 cm to 60 cm (8 in to 24 in). It weighs between 1 kg and 9 kg (2.2 lb to 20 lb), averaging 7 kg (15.5 lb). It has thick, coarse fur which extends to the tip of the tail. The colour of the body fur varies from black to brown, with a light sand colour and red also seen. The body is stocky and the legs short. It moves with a slow, waddling gait, but can perform a quick hop when pursued. The feet have five toes with large claws which assist the animal in climbing. The stomach is divided into three compartments by constrictions in the gut and is the most complex of any rodent.[citation needed] 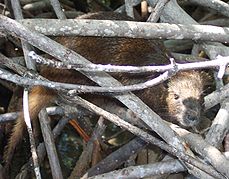 Desmarest's Hutia is found only in Cuba, but is widespread throughout its range. They are found on the main island, Isla de la Juventud, the Sabana archipelago, the Doce Laqunas archipelago and many of the other islands and cays of the Cuban archipelago. They are abundant in Guantánamo Province, particularly around the Guantanamo Bay Naval Base. In the mountainous areas of eastern Cuba, numbers of Desmarest's Hutia are decreasing.

Desmarest's Hutias normally live in pairs, but can be found individually or in small groups. They are diurnal and do not burrow, so during the night they rest in hollows in rocks or trees. They are omnivorous but eat mostly bark, leaves and fruit. Occasionally they will take small vertebrates such as lizards. Both males and females scent mark their territory with urine. They breed throughout the year with a gestation period of between 110 and 140 days (normally around 120 to 126 days), although peak breeding season is in June/July. They normally produce between one to three young, weighing an average of 230 g (8 oz). The young are precocial, with fur, fully open eyes and the ability to walk. They are weaned at around five months and reach sexual maturity at around ten months. In captivity they live for eight to eleven years. 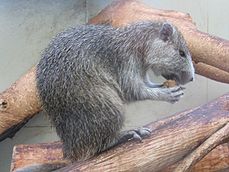 Hutias were traditionally hunted for food in Cuba as their flesh was agreeable and their size meant they provided a substantial meal. In a few places they were raised in barns and used as a minor stock animal. The Wild Animals Protection Act of 1968 made it illegal to hunt or kill hutias without a permit from the Ministry of Agriculture and Fisheries. In some areas they are so abundant that they cause damage to crops and are viewed as a pest.

Although they are common and there is no immediate concern over the species' survival, a population from East Plan Cay has been relocated to the Exuma Cays Land and Sea Park to ensure their long-term survival. It has also been suggested that they be trialled as a potential microlivestock, as they are easy to raise in captivity.

First described by Pallas in 1788 as Mys pilorides, it was later noted that Desmarest's Hutia did not belong in that genus, and it was placed in the genus Capromys by Tate in 1935. Five subspecies are recorded: ciprianoi, doceleguas, gundlachianus, pilorides, and relictus. Studies have so far shown no genetic differences between the two subspecies ciprianoi and relictus found on Isla de la Juventud, but a 5% sequence deviation by gundlachianus found on Cayo Fragaso. The common name, Desmarest's Hutia, is for Anselme Gaëtan Desmarest who described the species in 1822 with the synonym fourniere.