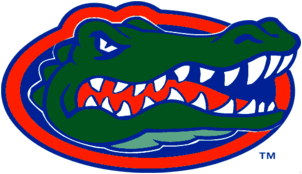 The Gators have two national championships, having won the and back-to-back, the first team since the 1991-1992 Duke team to accomplish this feat and the first to do it with the same starting lineup.

Florida began play in basketball in 1915-16 under head coach C.J. McCoy. The team went 5-1 its first year, but the following three seasons were all canceled due to . The team started back up in the 1919-20 season without a head coach at all, though they did have a new venue—the newly-built University Gymnasium. W.G. Kline took over coaching duties from 1920-1922.

By the mid-1920s the team outgrew the University Gymnasium (now called the Women's Gymnasium), so the university built another gym to hold the crowds of the fast-growing student population. Dubbed the New Gym, the Gators played there until 1949, when opened.

In 1932, Florida joined the as a charter member.

The team moved from the Florida Gym to the during the 1980-81 season.

was hired as the coach before the 1990-91 season. Despite the probation he inherited, Kruger slowly brought the team to increased success and reached the NIT final four in his second year as coach. In 1993-94, the pieces fell into place for Florida to have their best season ever at that time. Behind and , the Gators went to their first Final Four following a dramatic victory over UConn where missed two free throws with no time on the clock to force overtime, where the Gators eventually prevailed. They lost to Duke in the national semifinal, 70-65. The next year, they returned to the NCAA tournament, but were eliminated in the first round. Kruger's final season in 1995-96 resulted in a losing record, and he left to coach at Illinois.

Florida's Athletic Director, , looking for a young coach with a proven track record, hired , then at Marshall, as Kruger's replacement. His recruiting prowess was evident early, bringing future NBA star Jason Williams with him from Marshall and having early recruiting classes with future NBA players Mike Miller, , and , among others. The Gators made the NCAA Tournament every year from Donovan's third season with the team through the 2006-2007 season, a nine-year streak that is the school record, and the sixth-longest NCAA Tournament streak.

During the 1999-2000 season, the upstart Gators beat such traditional powerhouses as Duke, Illinois (led by former coach ), and North Carolina to advance to their first National Championship Game, before losing to heavily-favored Michigan State.

During the next few years the Gators went to the NCAA Tournament every year, but each year they lost in the first or second round. The Gators however repeated as SEC Champions during the 1999-2000 and 2000-2001 seasons. The 2004-2005 team had the distinction of being the first to win an SEC Tournament Championship, when they beat rival Kentucky in the title game.

The 2005-2006 team began the season unranked and went on a 17-0 winning streak for the best start in school history, surprising many with a young (four sophomores and one junior) but selfless squad following the graduation of David Lee and the departures of Matt Walsh and to the NBA. The trio accounted for 60% of their offense in 2005. The team faded late in the regular season, losing its last 3 games in February and entering the postseason with a 24-6 record, yet still managed to win it's second consecutive SEC Tournament Championship.

The Gators entered the as a #3 seed with a 27-6 record and #10 national ranking. They beat South Alabama and Milwaukee to advance to the regional. There, the Gators defeated the Georgetown Hoyas and upset the top-seeded Villanova Wildcats 75-62 to avenge their loss in the previous year's tournament and move on to their second under Donovan.

Florida defeated the upstart George Mason Patriots 73-58 in the national semifinals in Indianapolis. On , the Gators defeated the UCLA Bruins 73-57 in the National Finals to win the school's first men's basketball NCAA Championship. The University of Florida Athletic Association then purchased the floor used in Indianapolis for the Final Four, and installed it in the O'Connell Center.

The Gators returned all five starters from their championship team to begin the 2006-07 basketball season as the preseason #1 in both major media polls, a first for the university. The Gators locked up the SEC regular season Championship relatively early in the 06-07 season and were in possession of a 24-2 record before going on a late-February 1-3 skid that mirrored their 0-3 run a year earlier. For the second season in a row, the losses in February would be their last. Florida closed out Kentucky on Senior Night to end the regular season 26-5, and won their 3rd straight SEC Tournament Championship with relative ease, beating cbb link|season=2006-07|sex=men|team=Georgia Bulldogs|school=University of Georgia|title=Georgia, cbb link|season=2006-07|sex=men|team=Ole Miss Rebels|school=University of Mississippi|title=Ole Miss, and cbb link|season=2006-07|sex=men|team=Arkansas Razorbacks|school=University of Arkansas|title=Arkansas 77-56.

Florida entered the as the #1 overall seed in the tournament, and they advanced to the after wins in the regional against #5 seed Butler and #3 seed Oregon. In a rematch of the 2006 title game, the Gators again eliminated the UCLA Bruins. Florida defeated the Ohio State Buckeyes 84-75, in a rematch of a game they won 86-60 three months earlier, to become the first team since the 1991-92 Duke Blue Devils to win back-to-back National Championships and the first college team ever repeat as National Champions with the same starting lineup.

is currently the head coach of the Gators. Having recently completed his 11th season as coach, agreed to coach for the NBA's on , . It was revealed on , however, that Donovan had done an about-face and asked to be freed from his contract with the Magic to return to Florida. He was soon thereafter released from his contract and reintroduced as the Gators coach on .