The title of Miss Australia had existed since 1908, although it was not until 1954 [1] that it became associated with The Spastic Centres of Australia. The Miss Australia Quest was sponsored and organised from 1954 until the early 1960s by the lingerie manufacturer, Hickory, until Dowd Associates transferred the ownership to the Australian Cerebral Palsy Association in 1963.

Miss Australia raised money for The Spastic Centres of Australia through her family and friends. She was judged on merit, as well as raising the monies for children and adults with cerebral palsy.

The pearl-encrusted Miss Australia crown, worn by titleholders from 1965 to 1991, is held at the National Museum of Australia. The crown and was hand-crafted in silver and blue velvet, and decorated with more than 800 pearls. Designed by Melbourne artist Ernest Booth and manufactured in Japan, the crown was presented to the Miss Australia Quest in 1965 by Toyomoto Australia Pty Ltd. The crown was last used in 1991.[1]

The History of Miss Australia 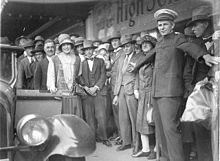 Began its association with The Spastic Centres of Australia

Ended its association with The Spastic Centres of Australia

One of the most famous Miss Australias was Tania Verstak. She was born in China of Russian parents, and when she won Miss Australia in 1961, she was the first woman of an immigrant background to win the award. Verstak's daughter is the actor Nina Young.

The 1960 Miss Australia, Rosemary Fenton, became the second wife of Ian Sinclair, former leader of the federal National Party and Speaker of the House of Representatives.

The first Aboriginal woman to win the Miss Australia title was Kathryn Hay in 1999. Ms Hay subsequently became a Cabinet Secretary in the Tasmanian government.

The Role Of Volunteers in Miss Australia

There are now multiple competitions using Miss Australia in their title. To differentiate amongst the official national preliminaries to international competitions, the franchise name is added to Miss Australia.

In 2002 Jim Davie revived Miss Universe in Australia by setting up the Miss Universe Australia organisation. This contest, which exclusively sends contestants to Miss Universe, was made famous by Jennifer Hawkins's victory in the 2004 Miss Universe pageant in Quito, Ecuador. Jennifer became only the second Australian woman ever to win the international title, following Kerry Anne Wells who won the pageant in 1972.

For the Miss World contest, a Miss World Australia is chosen through screenings. In previous years, titleholders from the original Miss World Australia contest were sent to Miss World. However, this was not the case in 2006, when the national contest was cancelled and Sabrina Houssami was conroversially crowned the winner. Penelope Plummer became Australia's first Miss World in 1968.