Ghost Town in the Sky

Ghost Town in the Sky was a Wild West-themed amusement park in Maggie Valley, North Carolina, USA. An unusual aspect of this park is that it is located atop a mountain which can only be accessed by visitors via a 3,370-foot-long (1,030 m) chair lift or an inclined funicular railway. These start at the parking area beside Jonathan Creek at an elevation of 3,150 feet (960 m), climbing to the lower level of the park at 4,400 feet (1,300 m), a climb of 1,250 feet (380 m). The recreated "Ghost Town" sits at 4,600 feet (1,400 m), with the highest elevation in the park being about 4,650 feet (1,420 m). The park was located on a ridge extending from Buck mountain which is in turn an extension of the Cataloochee Divide, border to the Great Smoky Mountains National Park. The park's entrance was located on U.S. Highway 19, the main road through the town. Ghost Town is promoted as "North Carolina's mile-high theme park". As of July 24, 2010, the park is completely closed and shows no sign of any upkeep.

Ghost Town was the brainchild of R.B. Coburn, an Orangeburg, SC native who moved to Maggie Valley, NC. The park was designed by Russell Pearson and constructed for approximately $1 million in 1960. The park opened on May 1, 1961, and quickly became one of Western North Carolina's most popular tourist attractions. He also opened another wild west theme park in Florida, Six Gun Territory.[1]

The park was sold in 1973 to National Services for a stock swap, but Coburn bought it back in 1986 and constructed the park's famous Cliffhanger roller coaster. In its later years under Coburn's ownership, the park suffered from mismanagement and a lack of maintenance. The Cliffhanger, Goldrusher, Sea Dragon, Monster, Mountain Town Swings, Undertaker, Dream Catcher, Casino, Round Up, Lil Devil, and Silver Bullet rides were constantly breaking down and were rarely opened, causing many visitors to tell others not to go. The chairlift and incline railway also required constant maintenance and repair and Coburn spent thousands of dollars maintaining them.[1] On July 16, 2002, the chairlift stopped, stranding passengers for over two hours. Although there were fewer-and-fewer people visiting Ghost Town because of the bad condition of the park. Coburn closed Ghost Town a few days after the chairlift failure and put it up for sale. The park remained closed for the next four years, with no maintenance on any of the rides, leading many to believe that no one would buy the park because of the bad condition of the rides. Fortunately, Ghost Town was sold in August 2006 and reopened on May 25, 2007 after $38 million had been spent on renovations and improvements. All of the rides were reopened except the incline railway, the train, and the Monster. Shockwave remained in storage.[citation needed] Two years later, after over $11 million more had been spent, $6 million of that on the Cliffhanger roller coaster, Ghost Town filed for bankruptcy. The economy and high gas prices the previous year were blamed for the park's problems, but managing partner Lynn Sylvester said reopening was planned for May 15 and the park would continue to operate.[4]

In mid-May 2009, the park's rides had not been inspected, and Ghost Town claimed to need a $330,000 loan in order to reopen for the summer on May 22. The park was asking the town for that money. If the town turned down the request, this was expected to mean the loss of 200 jobs and a $2 million payroll, as well as the impact on local businesses that benefit from the visitors.[2] However, "an anonymous investor" provided the money instead, according to park president Steve Shiver, so a vote by the town became unnecessary and the park opened as planned, except for a couple of rides that were not yet inspected. Ghost Town also added a new ride, Geronimo, which had been at a park in Memphis, TN. Geronimo had been bought by Ghost Town in 2007, but had been in storage for two years. Shiver said the park had an $27 million plan to improve the park over four to five years, including moving and adding rides and introducing new events.[3]

On February 5, 2010, a massive mudslide occurred when retaining walls on the Ghost Town property gave way. Although there were no injuries, more than 40 homes had to be evacuated, and 3 homes were damaged around the mountain. The park itself is said to have sustained damage, but to what extent is not publicly known. This led to speculation that the park would not open at all for the 2010 season.[5][6] Steve Shiver announced on a local news program that the park was still slated to open Memorial Day weekend, but this did not happen. Federal funding was granted to the park in the amount of $1.3 million for the clean-up of its main access road, Rich Cove, which was buried in the slide.

In early March, 2010, a judge ruled in favor of the park's largest creditors, SunTrust and BB&T, to proceed with foreclosure on Ghost Town and sell the property to begin paying off its $9 million dollar debt to SunTrust and $5 million dollar debt to BB&T. Ghost Town partners negotiated a separate deal with SunTrust and BB&T which gave them until May 31, 2010 to come up with an alternate plan, allowing the park to continue to operate if funding was obtained by the deadline. On May 4, a judge approved a takeover bid by American Heritage Family Parks. The company has pledged to pay SunTrust $7 million of its debt and BB&T its entire $5 million dollars of debt, and $100,000 in back taxes to Haywood County. The park was said to be allowed to open for the season while details of the sale were worked out.[7] Instead, the park remained closed. Details of any future involvement of American Heritage remains unknown.

In April of 2011, a judge dismissed the bankruptcy case citing the failure of Ghost Town partners to submit a sufficient re-organization plan to pay off its debts. This allows foreclosure proceedings to continue as the park is no longer protected under Chapter 11.[8]

The park was divided into several "towns", which are located at different elevations of the mountain, each of which has a different theme. Among these are the "Indian Village", "Mountain Town", and "Mining Town". The heart of the park is the re-created old Western town complete with a two saloons, a schoolhouse, bank, jail, and church, and various other businesses typical of the day. Each hour, a gunfight is staged right in the street, with visitors lining up on the board sidewalks to watch the action. The guns that the cowboys use can cause a serious powder-burn at a distance of 10 to 12 feet (3.0 to 3.7 m). Jimmy Wayne is one of the world-famous bad guy cowboys and is easily a crowd favorite. Robert Bradley plays "The Apache Kid", an iconic figure he created and has played since the park's inception. In the "Silver Dollar Saloon" there are hourly shows featuring old west can-can dancers, while the "Red Dog Saloon" features live country & bluegrass music performances throughout the day. "Indian Village" featured shows about Indian life in the old Western days, including a deer-hunt and a raid on a frontier settlement. "Mining Town" has areas where people can pan for gold and silver. It also has shows about life in mining settlements. The most popular one features a fight in the town after a miner finds a bunch of gold. "Mountain Town" features shows about life in the Smoky Mountains.

At the terminus of the chairlift and incline railway is the "Heritage Town Square", which was a 2007 addition to the park. This area features a museum chronicling the history of "Ghost Town", a restaurant, the Freefall, the Casino, and the Cliffhanger.

Cliffhanger originally opened in 1988 as Red Devil. In 2007 it was renamed Cliffhanger and given a new paint job.[9] The coaster is unique in that rather than boarding the train and being towed up the lift hill, its boarding station is at the top of the lift hill already. Once riders board the train, it rolls out of the station, around a 90-degree curve and then straight over the main drop and into its 1 inverted loop. The rest of the track flies out over the edge of the mountain with great views of the surrounding mountains and an extra feeling of excitement due to the proximity to the mountainside. Cliffhanger's re-opening was pushed back through the 2007 and 2008 seasons citing major repairs needed to get the coaster in operating condition. It opened on June 30, 2009 but was closed less than 2 days later needing additional major repairs and inspection to reopen.

The day after the coaster opened a ride operator detected something wrong with one of the coaster train’s seats. The state inspectors were still on site so they were called to check it out, and they discovered a hairline crack in the seat’s frame next to a bolt that attached the seat to the rest of the car. It fell upon Rotational Motion who built the custom cars for Ghost Town to come up with a solution. The coaster began operating again during the last few weeks of the 2009 season with no reported problems. Cliffhanger is currently SBNO (standing but not operating), after the train derailed during a test run one day before Ghost Town's 2010 season began. Steve Shiver said that Cliffhanger will be closed until a new train is purchased.

The other roller coaster operating at Ghost Town is a small kiddie coaster, Tumbleweed. It was originally named Lil Devil but received a name change along with Red Devil/Cliffhanger.[10]

Above the Ghost Town itself is another section of the park, which hosts a variety of standard amusement rides, as well as the "Mountain Top Music Hall" and "Indian Dance Hall". Here, you can see many bands like the Jeff Treece Band. All of the rides are situated at the edge of the mountain, and one, "The Gun Slinger", swings out over the mountainside giving riders an extra sense of exposure when riding. There are many great views of the surrounding Blue Ridge Mountains from the top of the park as well.

Another new feature for 2009 was "The House of Terror" during the Halloween season. For a ticket upgrade you could tour the haunted house featuring several actors used to scare the visitors.

Rides no longer in use. 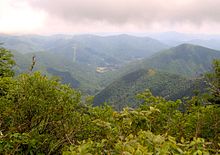 Maggie Valley, NC, viewed from the summit of Waterrock Knob. The incline railway path that leads to Ghost Town in the Sky is visible left of center.

In October and November 2006, a movie was filmed at the park. The film, titled Ghost Town: The Movie,[11] was directed by Jeff Kennedy and Dean Teaster and starred Bill McKinney and Herbert Coward, DJ Perry and Princess Lucaj and featured appearances by Rance Howard and Stella Parton (sister of Dolly Parton). The movie is based on the legend of Harmon Teaster, a Haywood County, NC native. It premiered at the Eaglenest Entertainment Center in Maggie Valley, NC on June 2, 2007.

Two independant films were filmed at the park, 2008 "Mandie and the Secret Tunnel" and in 2010 "Ringside Rosary".