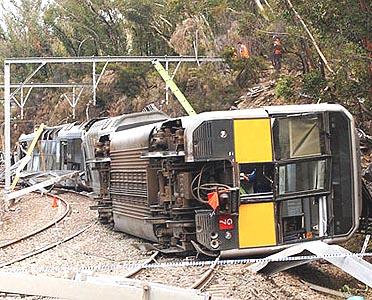 The Waterfall rail accident was a accident that occurred on 31 January 2003 near , . The train derailed killing seven people on-board, including the train driver.

On the day of the disaster, a intercity train service, set G7, which had come from Central Station at 6:24 am, departed Waterfall railway station heading south towards Port Kembla Station via . At approximately 7:15 am the driver suffered a heart attack and lost control of the train. Consequently, the train was travelling at convert|117|km/h|mph|abbr=on as it approached a curve in the tracks through a small gorge. This curve is rated for speeds up to convert|60|km/h|mph|abbr=on. The train derailed, overturned and collided with the rocky walls of the gorge in a remote area south of the station. It was reported that rescuers had to carry heavy lifting equipment for more than one and a half kilometres to reach the site. [, [http://www.abc.net.au/news/newsitems/200301/s773770.htm "Passengers still trapped in Sydney train wreckage"] January 31 2008. Accessed 30 August 2008] Two of the carriages landed on their side and another two were severely damaged in the accident. [, [http://www.abc.net.au/news/newsitems/200301/s773556.htm "Seven killed in train accident"] 31 January 2003. Accessed 30 August 2008] In addition to the seven fatalities, many more passengers were injured.

The subsequent official inquiry discovered the deadman's brake had not been applied. It was put forth by the train guard's solicitor that the guard was in a for up to 30 seconds just prior to the accident. The experienced human-factors accident investigator determined the organizational culture put the driver firmly in charge, making it psychologically more difficult for the guard to act. The guard in question had a history of not responding well to stress and refused to be interviewed by the investigator.

Causes of the accident

Tangara trains have a number of safety and vigilance devices installed, such as a deadman's brake, to address problems when the driver becomes incapacitated. If the driver releases pressure from this brake the train will come to a halt.

The G7 in question was a four car Tangara set that was fitted with an AC drive system for evaluation purposes. There was a driver in the forward driver carriage and a guard in the rear driver carriage. On this service, the guard, who could have applied the emergency brake, and the deadman's brake were the main safety mechanisms in place.

G7 was scrapped in 2005 due to the damage sustained in the accident; all four cars were damaged beyond repair.

These were the official findings of the NSW Ministry of Transport investigation to the accident. A report into the accident, headed by Commissioner Peter McInerney, was released in January 2004.

Some of the technical problems included brake failure and power surge problems. After the accident these were often blamed by some for being the cause of the accident. Many of the survivors of the accident mentioned a large acceleration before the accident occurred. Furthermore, there was an understanding that the emergency brake should be seldom used because the train would accelerate between 5 and 10 km/h before the brake came into effect.

Official findings into the accident also blamed an "underdeveloped ". There has been criticism of the way CityRail managed safety issues that arose, resulting in what the called a "a reactive approach to risk management".

At the inquiry, Paul Webb, , representing the guard on the train, Bill Van Kessel, said that Van Kessel was in a at the time of the question, for up to 30 seconds, which would have removed the opportunity for the guard to put the train to a halt. Webb had also proposed that there had been attitudes that the driver was completely in charge of the train, that speeding was not an acceptable reason for the guard to slow or halt the train, which would have been a contributing factor in the accident.

It is worth noting however, that prior to this derailment, neither training nor procedures called for the guard to exercise control over the speed of the train by using the emergency brake pipe tap. Apart from the driver being considered to be the sole operator of the train, the emergency brake pipe tap does not offer the same degree of control over the automatic brake as a proper brake valve. The consensus among train crews was that a sudden emergency application from the rear could cause a breakaway and there was some evidence from previous accidents to support this view.

Since this derailment, CityRail training and operational procedures now emphasise the guard's responsibility to monitor the train's speed, and if need be open the emergency brake pipe tap to bring the train to a stop.

All CityRail trains now have an additional safety feature, fitted since the accident. As well as the Deadman handle and foot pedal, the driver is now required to acknowledge a vigilance button. If the train's driver does not use the controls and does not acknowledge the vigilance alarm, the vigilance system is activated and applies the emergency brakes. All trains have also been fitted with s that records the driver's and guard's actions as they work the train, as well as the train's speed.Fact|date=September 2008

Rescue workers who attended the scene were impeded from accessing the trapped passengers on the train as they did not have the keys required to open the emergency exit doors. Emergency exit mechanisms have all been upgraded to allow them to be used without requiring a key. Railcorp is also planning to install internal emergency door release mechanisms to allow passengers to open the doors in an emergency.Fact|date=September 2008

could have prevented this accident. Railcorp has tested ATP systems on the Blue Mountains line west of Penrith, and plans for ATP implementation across the CityRail network are being formulated.Fact|date=September 2008

* [http://www.cityrail.info/general/waterfall.jsp Special Commission of Inquiry into the Waterfall Rail Accident]