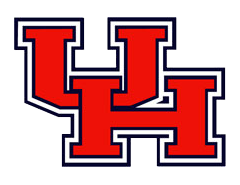 The Houston Cougars men's basketball team represents the in Houston, in U.S. NCAA men's competition. The university is a member of . The team last played in the in 1992. The Cougars are currently coached by .

The team played in the NCAA's along with the school's football team. Coached by , the team won conference titles two years in a row.

Guy Lewis led the University of Houston Cougars Division I basketball program to 27 straight winning seasons and 14 seasons with 20 or more wins, including 14 trips to the NCAA Tournament. His Houston teams made the Final Four on five occasions (1967, 1968, 1982-84) and twice advanced to the NCAA Championship Game (1983, 1984). Among the outstanding players who Lewis coached are , , , , , and "Sweet" Lou Dunbar. Despite his exemplary record of achievement, Lewis has yet to be inducted into the .

Lewis's UH teams twice played key roles in high-profile events that helped to popularize college basketball as a spectator sport. In 1968, his underdog, Elvin Hayes-led Cougars upset the undefeated and top-ranked UCLA Bruins in front of more than 50,000 fans at Houston’s . Most importantly, it was the first nationally-televised college basketball game. The game became known as the “Game of the Century” and marked a watershed in the popularity of college basketball. In the early 1980s, Lewis's teams at UH gained notoriety for their fast-breaking, "above the rim" style of play as well as their overall success. These teams attracted great public interest with their entertaining style of play. At the height of Phi Slama Jama's notoriety, they suffered a dramatic, last-second loss in the 1983 NCAA Final that set a then-ratings record for college basketball broadcasts and became an iconic moment in the history of the sport. Lewis's insistence that these highly successful teams play an acrobatic, up-tempo brand of basketball that emphasized dunking brought this style of play to the fore and helped popularize it amongst younger players.

Houston lost in both NCAA Final games in which Lewis coached, despite his "" teams featuring superstars and . In 1983, Houston lost in a dramatic title game to on a last-second dunk by . The Cougars lost in the 1984 NCAA Final to the Georgetown Hoyas, led by . Lewis retired from coaching in at number 20 in all-time NCAA Division I victories, his 592-279 record giving him a .680 career winning percentage.

As a coach, Lewis was known for championing the once-outlawed dunk, which he characterized as a "high percentage shot", and for clutching a brightly-colored red and white polka dot towel on the bench during games. Lewis was a major force in the racial integration of college athletics in the South during the 1960s, being one of the first major college coaches in the region to actively recruit African-American athletes. His recruitment of and in 1964 ushered in an era of tremendous success in Cougar basketball. The dominant play of Hayes led the Cougars to two Final Fours and sent shock waves through Southern colleges that realized that they would have to begin recruiting black players if they wanted to compete with integrated teams.

After 21 years in the , the Cougars joined in 1996. Under head coach , the basketball program had a disappointing initial season in C-USA. The team went 3-11 against C-USA teams in 1996-97. The next season was even more futile. Brooks, who had led the Cougars since 1993, coached the Cougars to a rock bottom conference record of 2-14 in 1997-98. The last, and only other, time the Cougars recorded only two conference victories in a season was in 1950-51; their first season in the .

One of 's biggest sports icons and one of the Cougars best basketball players ever, was hired to coach the program that he led as a player to the 1983 NCAA Final as part of . Basketball excitement was back on campus, and fans looked forward to the promising years to come. After just two seasons however, Drexler resigned as head coach to spend more time with his family.

was hired to do what Clyde Drexler could not—lead the Cougars to a winning season and earn a spot in the NCAA Tournament. After losing seasons in each of his first two years, McCallum guided the Cougars to a 18-15 record in 2001-02. That season, the team won two conference tournament games and qualified for the . However, the team regressed in the following season and failed to qualify for their own C-USA tournament.

was named as the head coach of Cougars basketball in 2004. Known as "Turnaround Tom" for his reputation of inheriting sub-par basketball programs and making them better, Penders was hired to rebuild a program that recorded only one winning season in its last eight years. After a surprising debut season in 2004-05 that led to an NIT appearance, the team had high hopes to build on their relative success and make the NCAA Tournament in 2006.

The 2005-06 season looked promising at the outset. The Cougars started their first game on a 30-0 scoring run against Florida Tech. Less than two weeks later, the Cougars beat nationally ranked LSU on the road and Arizona at home. The surprising wins earned the Cougars their first national ranking in several years. The team that seemed destined for an NCAA Tournament berth failed to capitalize on their success and national recognition and began to stumble after a loss to South Alabama in December. The Cougars won only one conference tournament game and had to settle again for another NIT bid.

Dubbed as "The Show," the 2006-07 Cougars entered the season with cockiness and strong expectations to finally make it into the NCAA Tournament. A difficult schedule matched the Cougars with seven different teams that would end up qualifying for either the 2007 NCAA Tournament or NIT. Houston lost three times to Memphis and once to Arizona, Creighton, Kentucky, South Alabama, UNLV, and Virginia Commonwealth. By going 0-9 against these quality teams, the Cougars proved they were not worthy of an to the NCAA Tournament. Not surprisingly, two conference tournament wins against lower seeds and an unimpressive 18-15 overall record were not even enough to earn the team an invitation to the NIT.

With a slightly new nickname ("The Show—In 3D") and slightly new uniform (a changed trim design), the 2007-08 Cougars hoped to build on their mediocre prior season and reach the NCAA Tournament for the first time since 1992. Eight straight home games from November 21 to December 29 helped the Cougars get off to a 11-1 start. However, the team lost most of its critical games at the end of the season, including their last two games (both against ).

Their post-season hopes were not altogether dashed, however. Houston received an invitation to the inaugural tournament and defeated Nevada and Valparaiso but lost to conference rival Tulsa in the semifinal round.

The 2008-09 season begins on November 11th with the 2K Sports Classic tournament in .

In December, the Cougars will travel over 1,300 miles (their farthest scheduled trip of the season) to for a rare match-up against the Toledo Rockets at .

† Played in the (current players in bold)

The Cougars have retired the numbers of five men's basketball players: , , , , and Michael Young.