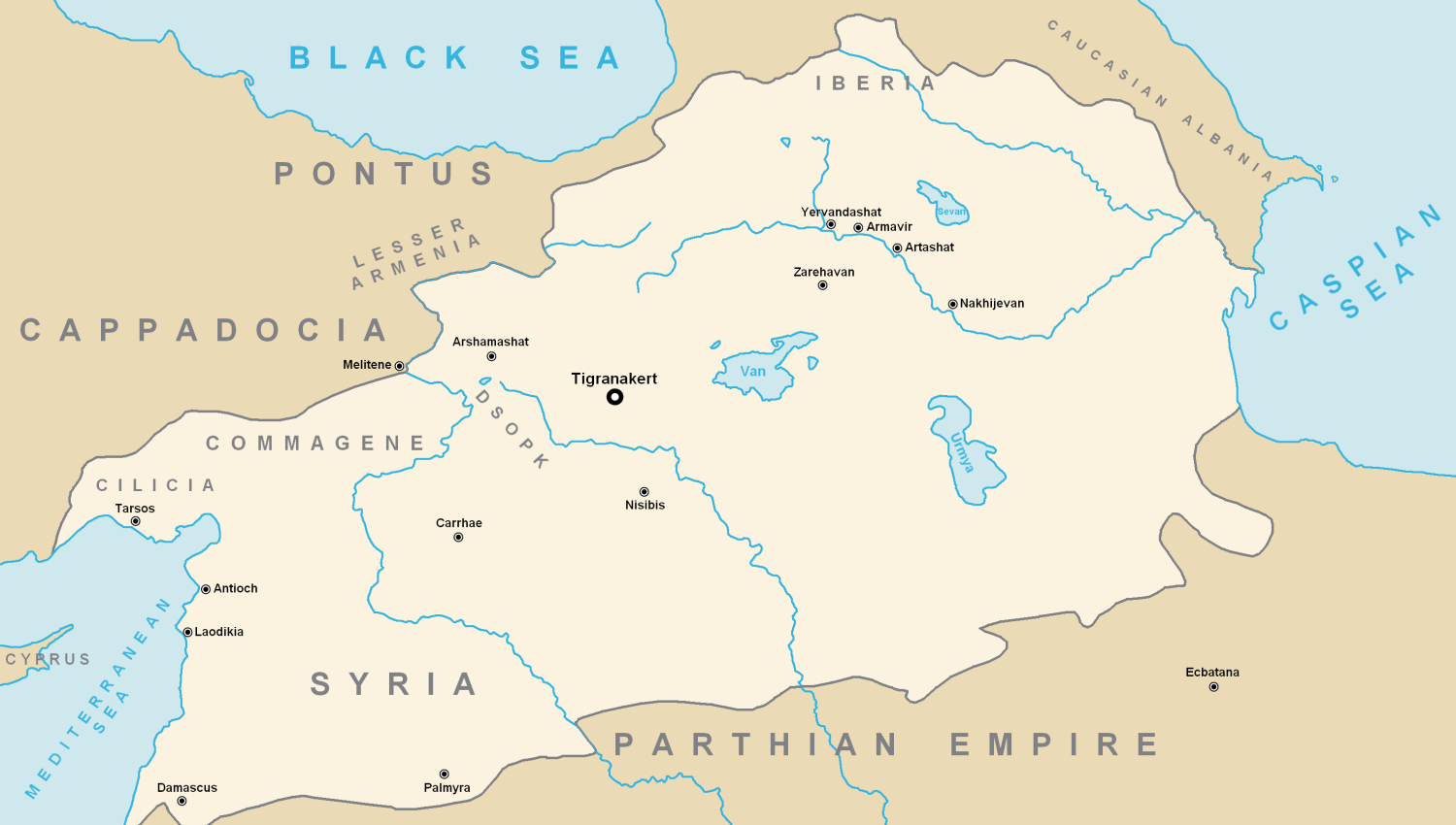 image_map_caption = Kingdom of at its greatest extent under the after the conquests of , .
capital = Tigranakert
religion =
common_languages = Armenian
currency =
legislature =
stat_year1 =
stat_pop1 = The Kingdom of Armenia (or Greater Armenia) was an independent kingdom from to AD and a client state of the Roman and Persian empires until , stretching from the Caspian to the Mediterranean seas. ["Time Almanac", page 724 by Editors of Time Magazine] [The New Review, page 208. Edited by Archibald Grove, William Ernest Henley]

The predecessor of the Kingdom was the Satrapy of Armenia ("Armina" in the Old Persian, "Harminuya" in the Elamite and "Urashtu" ("Urartu") in the Bablylonian parts of of ) part of the , which later became an independent Kingdom under the with Macedonian influence.

After the destruction of the , a Hellenistic Greek successor state of 's short-lived empire, a Hellenistic Armenian state was founded in 190 BC by Fact|date=April 2008. At its zenith, from 95 to 66 BC, Armenia extended its rule over parts of the Caucasus and the area that is now eastern , and Fact|date=April 2008. For a time, Armenia was one of the most powerful states in the Roman East. It came under the Roman in 66 BC, after the and the final defeat of Armenia's allied . invaded and defeated the kingdom in 34 BC, but Romans lost hegemony at time of the in 32-30 BC. In 20 BC, negotiated a truce with the Parthians, making Armenia a buffer zone between the two major powers.

Subsequently, Armenia was often a focus of contention between Rome and Persia, with both major powers supporting opposing sovereigns and usurpers. The ns forced Armenia into submission from 37 to 47, when the Romans retook control of the kingdom.

Under , the Romans fought a campaign (55&ndash;63) against the , which had invaded the Kingdom of Armenia, allied to the Romans. After gaining (60) and losing (62) Armenia, the Romans sent XV "Apollinaris" from to Cn. Domitius Corbulo, "legatus" of Syria. Corbulo, with the legions XV "Apollinaris", III "Gallica", V "Macedonica", X "Fretensis" and XXII, entered (63) into the territories of , who returned the Armenian kingdom to Tiridates.

Another campaign was led by Emperor in 162-165, after had invaded Armenia and installed his chief general on its throne. To counter the Parthian threat, Verus set out for the east. His army won significant victories and retook the capital. Sohaemus, a Roman citizen of Armenian heritage, was installed as the new . But a result of an epidemic within the Roman forces, Parthians retook most of their lost territory in 166 and forced Sohaemus to retreat to Syria, аnd in Armenia Arsakid’s dynasty was restored.

After the fall of the in Persia, there succeeded the Sassanian Dynasty which aspired to establish control over Armenia. The Sassanid Persians occupied Armenia in 252. In 287 Tiridetes III the Great, was established king of Armenia by the Roman armies. He soon accepted Christianity. The traditional date is in 301, earlier than Constantine the Great.

In 387 the kingdom was split between the and the Persians. Western Armenia quickly became a province of the under the name of ; Eastern Armenia remained a kingdom within Persia until 428, when the local nobility overthrew the king, and the Sassanids installed a governor in his place.

By the second century BC the population of Greater Armenia spoke Armenian, implying that today’s Armenians are the direct descendants of those speakers. [Patrick Donabedian, “The History of Karabagh from Antiquity to the Twentieth Century,” in Levon Chorbajian, Patrick Donabedian and ,] [The Caucasian Knot: The History and Geo-Politics of Nagorno-Karabagh (London and New Jersey: Zed Books, 1994), p. 53.] [Armenia and Azerbaijan:thinking a way out of Karabakh David D. Laitin and Ronald Grigor Suny] [Greek Geographer, Strabo, ]