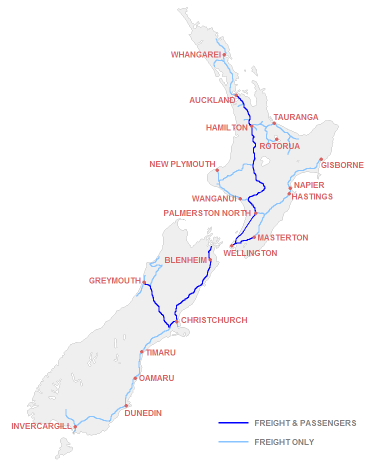 Rail transport in New Zealand consists of a network of RailGauge|1067 gauge () lines in both the North and South Islands of . Rail services are focussed primarily on freight, particularly bulk freight, with limited passenger services on some lines. Only and have urban rail systems, both of which are being upgraded and expanded.

Ownership of the national rail network is vested in a , (the New Zealand Railways Corporation). The primary operator is and its subsidiaries and , with Veolia operating commuter services in .

From 1993 to 2004 the network (including the track) was owned by a private company, , formerly New Zealand Rail Ltd. The infrastructure has been renationalised. In May 2008 the New Zealand Government agreed to buy 's rail and ferry operations for $665 million from [citeweb|url=http://www.scoop.co.nz/stories/PA0805/S00053.htm|title=Rail buy back marks new sustainable transport era|date= |accessdate=2008-05-05] .

The New Zealand rail network has around 3898 km of line, of which about 500 km is electrified. The narrow RailGauge|1067|al=on|lk=on was chosen due to the need to cross mountainous terrain in the country's interior and the lower cost of construction.

The network has been the subject of major upgrading works on a number of occasions. The most major of these were the in Wellington, opened ; the Rimutaka deviation to the Wairarapa, ; and the Kaimai deviation in the Bay of Plenty, . All of these involved major tunnelling works, of close to convert|9|km each in the two latter cases. Significant infrastructure improvements were also carried out on the in the mid 1980s, some as part of the electrification scheme.

Current major projects include electrification of the Auckland suburban network, and a proposed rail link to a deep sea port at .

Until the 1950s most motive power consisted of steam locomotives. There were three sections electrified at 1.5 kV DC (Wellington suburban, Christchurch-Lyttelton, and Arthur's Pass-Otira), of which only the Wellington suburban lines are still electrified. began in the late 1940s with shunting engines; the first main-line locomotives, the English Electric DF class, were introduced in 1954. By 1967 steam had virtually disappeared from the North Island but remained in the South Island until 1971. Since 1983 a small number of privately owned steam and diesel locomotives have been permitted to operate special trains. In 1988 electrification of the North Island Main Trunk between Palmerston North and Hamilton was commissioned.

Most freight services are geared towards export industries, with most services emphasising capacity. For example, coal services on the Midland line, headed by two class DX locomotives, generally consist of 30 coal hopper wagons with a total capacity of 1600 .

The former rail operator Tranz Rail had been accused of forcing freight onto the roads. In 2002, Tranz Rail introduced a controversial containerisation scheme that assumed that most freight would be carried in containers on unit trains made up of fixed consists of flat deck wagons. Container loading depots were constructed at the major freight terminals. As a result, the government has required minimum level of freight tonnages for Toll to keep its monopoly freight rights on most lines, since renationalising the rail network from Tranz Rail in 2003.

Freight levels have now reached the level that they were at when the railway had a virtual monopoly, prior to 1983. In 1980 11.8 million tonnes of freight was moved by rail, in 1994 this had decreased to 9.4 million tonnes. By 1999 tonnes carried had increased to 12.9 million tonnes, slightly more than the 1975 peak

In recent years the amount of freight moved by rail has increased substantially, and started to gain market share in non-bulk areas as well. The line between Auckland and saw a increase of 39% in freight volumes between 2006 and 2007. The five daily trains on the 667 km line reduced truck volumes on the route by around 120 per day. [" [http://www.nzherald.co.nz/topic/story.cfm?c_id=296&objectid=10458231 Rail freight figures up] " - "", Friday ]

In the heyday of passenger rail in the 1950s and 1960s most provincial routes had railcar and locomotive-hauled passenger services. In 1965, 25 million passengers traveled by rail, by 1998 this had decreased to 11.7 million. Today now there are only four long-distance routes: the Overlander between and (which was to be withdrawn in September 2006, but continues on a reduced timetable), the between Wellington and , the between and , and the between Christchurch and . Long-distance passenger services are operated by , a part of . The is sometimes regarded as a long-distance service but is run by Wellington's commuter rail operator, , also part of KiwiRail.

Services to Tauranga (the ), Rotorua (the ), and Napier (the ) ceased in 2001; The The Southerner, between Christchurch, and , in 2002; and The Northerner night service between Auckland and Wellington in 2004.

Both Auckland and Wellington have suburban passenger services. Christchurch and Dunedin formerly had suburban services, but they were withdrawn due to a lack of patronage. owns , which operates suburban passenger services in the Wellington region. There are five lines, all electrified except for the Upper Hutt to Masterton services (the ). Tranz Metro uses EMUs, and diesel locomotives on non-electrified services. In the 1930s Wellington was the second city (after Christchurch) to have electric suburban trains, and today it is the only city with them. Wellington is regarded as having the best passenger train system in New Zealand.

For 9 years Tranz Metro also operated the suburban trains in Auckland, the largest city in New Zealand. However, in mid-2004 Connex (now Veolia New Zealand) won the contract to run them - Tranz Metro did not tender. There are three lines: the Southern Line, Eastern Line and Western Line. All trains are diesel-operated, using both DMUs and locomotive-hauled push-pull trains. Currently, there is a programme to build new lines, re-open old lines (such as the and extending services north to Helensville) and electrify existing lines to improve the quality and frequency of services. Most Auckland rolling stock is owned and all services are funded by the (ARTA).

Four heritage rail operators, the , , Trust and the , own and operate their own carriage and mainline-certified steam or diesel locomotive fleets. These groups have operated special excursion trains on the national network since 1978, and have been allowed to use suitable locomotives to haul these trains since 1983. A small number of other groups have overhauled their own locomotives for main-line use with either heritage or public passenger carriages.

The railway network was initially constructed by the provincial governments of New Zealand from 1863 onwards. New Zealand's first public railway was opened in that year at Ferrymead by the . The were built to the of RailGauge|63. On , opened a branch from to Bluff to the international of RailGauge|ussg).

From 1870, the central government of Sir proposed infrastructure including railway development, to be funded by overseas loans of £10 million. The central government also adopted a national gauge of RailGauge|42. The first narrow-gauge line was opened on in the , the under the auspices of the Dunedin and Port Chalmers Railway Company Limited. Auckland's first railway, between Auckland and Onehunga, opened in 1873. Vogel also arranged for Brogdens of England to undertake several rail construction contracts, to be built by "Brogden's Navvies" recruited in England.

Following the abolition of the provinces in 1876, the lines were controlled by the central government, originally under the Public Works Department, and from 1880 under the . A few lines were privately built; only the , in 1908, achieved any measure of success.

At the network's peak in the 1950s, about 100 lines were operating. There were large-scale closures of branch railways in the 1960s and 1970s. The network was initially protected from road transport competition, but during the 20th century, this protection was gradually eased until its total abolition in 1983.

The networks of the North and South Islands were independent of one another until the introduction of the inter-island roll-on roll-off rail ferry service in 1962 by the Railways Department, now branded The Interislander.

For most of their history, New Zealand's railways were administered by the , with the Minister of Railways being a member of Cabinet. In 1982, the Railways Department was corporatised into a new entity required to make a profit, the . In 1990, the core rail operations of the Corporation were transferred to New Zealand Rail Ltd, a , with the Corporation retaining non-core assets. New Zealand Rail Ltd was privatised in 1993, with the new owners adopting the name in 1995.

During the period of private ownership of the network, Tranz Rail was widely accused of diverting freight to its trucks and forcing other freight off the rails. It was also accused of deliberately running down some lines through lack of maintenance. The Midland Line, which mostly carries coal from the West Coast to Lyttelton, was assessed to be in a safe but poor state by the LTSA government safety body in 2003, and has needed major repairs. One of the reasons often cited for these policies was the cost of using road transport was less than using rail, because the road infrastructure was provided as a , whereas the rail network was a . Tranz Rail was also alleged to have denied reasonable access to the rail network by heritage operators, who were faced with a lack of access to certification resources and high charges that made their operations marginally economic at best. In recent years heritage groups have also faced increased bureaucratic requirements in the arena of safety certification, as well as problems obtaining suitable public liability insurance.

In 2002 shares in Tranz Rail dropped to a record low price on the New Zealand Sharemarket as a result of its poor financial state. The government then considered various schemes for bailing it out in return for regaining control of the rail infrastructure. Cited reasons included moving freight traffic from road to rail and ensuring access to the tracks for all interested parties. of Australia made a successful takeover bid for Tranz Rail, subject to an agreement to sell back the infrastructure to the government for $1. The government has since committed to $200 million of taxpayer funding on deferred maintenance and capital improvements via the New Zealand Railways Corporation, now trading as .

Following successful negotiations with Toll in May for the purchase of its rail assets, the government formally acknowledged the change of ownership at a ceremony on . The name of the new government organisation created to operate services on the rail network was revealed to be . [cite news |first= |last= |authorlink= |coauthors= |title=Back to the future with Jim's KiwiRail |url=http://www.stuff.co.nz/thepress/4603420a6009.html |work=The Press |publisher=Fairfax New Zealand |date= |accessdate=2008-07-01 ]

New Zealand's most serious rail disaster occurred on Christmas Eve 1953, during the visit of Queen Elizabeth II, when a washed away the bridge at Tangiwai. 151 lives were lost when the bridge collapsed as a Wellington-Auckland express passenger train was crossing it.

About 60 groups operate rail heritage lines or museums. Almost all are members of the Federation of Rail Organisations of New Zealand, and they include street tramways and bush tramways as well as railways. Large-scale rail preservation in New Zealand got underway in the 1960s when many steam locomotives were withdrawn and branch lines closed.

Rail museums in New Zealand usually focus around storage and displays of rolling stock with a short line of approx 1 km or more in length on which trains are operated. This covers most of the historic rail groups in New Zealand. A smaller number of lines are operated as heritage railways, usually on a closed section of a former national network branch line. Typically these lines are longer, usually 5 km or more, and most of their activities are focused on train operations with less emphasis on display and storage.

Current operations of the heritage railway type include the , Bush Tramway Club, Waitara Railway Preservation Society, Weka Pass Railway and . The Taieri Gorge Railway, which is a Local Authority Trading Enterprise of the Dunedin City Council, is 60 km in length, making it the most ambitious project of its type to date. All other lines are operated by voluntary societies. The Weka Pass Railway at 13 km is the most lengthy of these. The Bay of Islands Vintage Railway is 11 km in length, but it is in poor condition, though having operated its first trains through Kawakawa since ceasing operations in 2000 for two weeks from , the Society is now working on rehabilitating the track between Kawakawa and Opua.