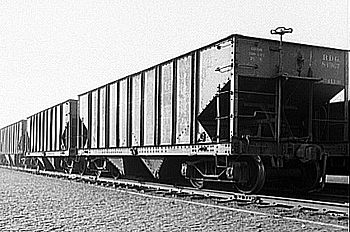 New hopper cars outside the Trinity Industries plant where they were manufactured in Winder, Georgia.

A hopper car is a type of railroad freight car used to transport loose bulk commodities such as coal, ore, grain, track ballast, and the like. The name originated from the coke manufacturing industry which is part of the steel industry (see Etymology below).

This type of car is distinguished from a gondola car in that it has opening doors on the underside or on the sides to discharge its cargo. The development of the hopper car went along with the development of automated handling of such commodities, with automated loading and unloading facilities. There are two main types of hopper car: open and covered.

Covered hopper cars are used for bulk cargo that must be protected from the elements (chiefly rain) such as grain, sugar, and fertilizer. Open cars are used for commodities such as coal, which can get wet and dry out with less harmful effect. Hopper cars have been used by railways worldwide whenever automated cargo handling has been desired. "Ore jennies" is predominately a term for shorter open hopper cars hauling taconite by the Duluth, Missabe and Iron Range Railway on Minnesota's Iron Range.

Recently in North America the open hopper car has been in a terminal decline due to the advent of the rotary car dumper (which simply inverts the car to unload it, and has become the preferred unloading technology). A rotary dumper permits the use of simpler and more compact (because sloping ends are not required) gondola cars instead of hoppers. Covered hoppers, though, are still in widespread use. For loads that are less dense (such as grains) or susceptible to damage in the weather (such as unmixed cement), covered hoppers are normally used.

The Coke Express, a unit train of hopper cars loaded with Coke (fuel), with the words "Coke Express" painted on the sides of the hoppers.

Increase in wheel loads has important implications for the rail infrastructure needed to accommodate future grain hopper car shipments. The weight of the car is transmitted to the rails and the underlying track structure through these wheel loads. As wheel loads increase, track maintenance expenses increase and the ability of a given rail weight, ballast depth, and tie configuration to handle prolonged rail traffic decreases. Moreover, the ability of a given bridge to handle prolonged rail traffic also decreases as wheel loads increase. [1]

The term "hopper car" comes from the coke manufacturing industry. Coke is used for the production of steel. To make coke coal is packed into huge ovens which bake it to remove volatile oils. The goal is to turn the coal into carbon which is as pure as possible. In the historical process of coke manufacture after the coal was baked into coke it was pushed out onto a slanted metal roof called a "shed" or "wharf" where workers called "coke pullers" would wash down the hot coke with water hoses. Using a sort of a broom called a "beaver" they would then push the quenched coke into square holes in the shed which were called "hoppers" because the men would jump over the holes as they moved the coke around. The coke would fall down into a "hopper car" waiting below and would be shipped off by rail for further processing. In other words, the cars were named after the holes above them.[citation needed]