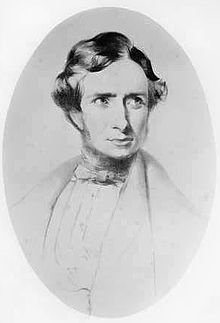 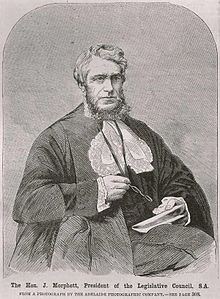 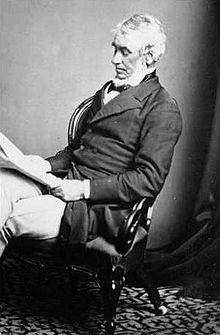 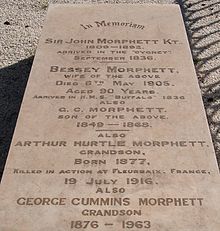 Morphett was born in London, the second son of Nathaniel Morphett, a solicitor, and his wife Mary, née Gliddon, of Cummins, Ide, Devon, and was educated at Plymouth and Highgate Grammar Schools.[1] At 16 he was an office boy in the employ of a ship broker, Henry Blanshard. He then obtained a position in the counting house of Wilson & Blanshard.[citation needed] At 21 he left for Egypt and worked in the counting-house of Harris & Co in Alexandria. It was here that he met Colonel William Light. He returned to London in 1834, became interested in the South Australian colonisation schemes, and was an early investor in the South Australian Company; he was one of the first who paid £81 for a preliminary land order of 134 acres.[2] With his younger brother George, he set up an agency business and published a pamphlet declaing his intention of migrating to South Australia and his readiness to act for purchasers of land. He also advertised in similar terms in the Globe and Traveller, 30 July 1835.[3] In September 1834 he joined the South Australian Literary Association, and around the end of 1835 he attended the dinner given to honour Captain Hindmarsh's appointment as governor of South Australia.[4]

On 20 March 1836, Morphett sailed for South Australia in the Cygnet, which arrived at Kangaroo Island on 11 September 1836. On 5 November 1836, the Cygnet arrived at Holdfast Bay. Next day, with Lieutenant Field and George Strickland Kingston, he "discovered" the River Torrens. With others on the Cygnet, he also identified the mouth of the Port River, identified the suitability of Port Adelaide, and visited Port Lincoln with Light. At the crucial meeting on 10 February 1837, he played a decisive role in confirming the choice of Adelaide for a settlement.

On 15 August 1838 he married Elizabeth Hurtle Fisher, the eldest daughter of James Hurtle Fisher (later Sir James), whom he had first met at the meetings of the South Australian Literary Association in London. They were married at Trinity Church, South Australia's first Anglican Church.

As a land agent for the South Australian Company, he secured valuable land for his family and clients; he was energetic, enthusiastic sensible and lucky, and profited greatly from a multitude of land transactions. A Secondary Towns Association was formed in England in 1838, and Morphett became the local Colonial Representative for the Secondary Towns Association. In May 1839 he paid £4,000 for a Special Survey of 4,000 acres (1,600 ha) of land along the Hutt River, and in November 1939 he bought 8,000 acres on the River Murray which became the Wood's Point Estate. During November 1841, as one of the trustees for Lt. Col. George Gawler, Morphett selected land in sections 1553 and 1554 to the south of the Barossa South Survey.

In December 1939, Morphett was elected Director of the South Australian Railway Company. In 1842, he became one of four members appointed by the Crown to assist the Governor, and was also elected Chairman of the Chamber of Commerce. Morphett was one of the originators of the Royal Agricultural and Horticultural Society, presiding over the introductory meeting on 24 April 1844. In April 1846, he became a member of the Committee of management of the English Railway Company which proposed to lay a railway along Port Road. He was a director of the Adelaide Mining Company, and also a director of the South Australian Mining Association which owned the Burra mine. When the Adelaide Cricket Club was formed in 1853, Morphett became its Vice-President and his father-in-law, J.H. Fisher, its President.[2][3][5]

Morphett was appointed treasurer to the town corporation on 5 December 1840, and on 15 June 1843 was nominated as one of four non-official members of the expanded South Australian Legislative Council. In January 1845 he chaired the meeting called to protest the British government's proposal to send Parkhurst prison boys to South Australia. In September 1846, as a protest against the mining royalty bill being passed by the casting vote of Governor Robe, Morphett and the three other non-official council members left the chamber - in consequence the council was left without a quorum. In August 1851 Morphett became Speaker of the enlarged Legislative Council, and on 9 March 1857 he was elected a member of the legislative council at the first election under responsible government. He was chief secretary in the Thomas Reynolds ministry from February to October 1861, and on 31 March 1865 was elected president of the legislative council, a position he held until his retirement. He was knighted on 16 February 1870 for his services to South Australia. In February 1873 he retired from politics and public life. His sons Hurtle and John Cummins took over the running of his properties along the Murray.[2][3]

Freemasonry filled a great part of Morphett's personal life. He was elected as a member and initiated into the Craft on 27 November 1834 in London when The Lodge of Friendship, a Lodge especially founded to become South Australia's first Lodge, held its very first meeting. Later he rose in position within the Lodge, (which is still in operation), ultimately to become its Master.

Morphett died at his home, Cummins House, Morphettville, on 7 November 1892. He was survived by his wife Elizabeth, six daughters and four of his five sons.

Morphett had faith in the colony from the beginning: although he realized that for a period South Australia would be regarded as a pastoral colony, depending chiefly on its export of wool, as early as 1838 he had hopes of raising wine, olive oil, figs, maize, flax, silk, rice, indigo and tobacco.[6] Morphett supported Fisher and Gouger in their quarrels with Hindmarsh, later becoming a force in the Legislative Council, and he worked hard for responsible government. He took an active part in the formation of the Literary Association and the Mechanics Institute, and was an early supporter of St Peter's College. He was one of the earliest men to take an interest in horse racing in South Australia, and Morphettville Racecourse was named after him. Also named after him were the suburbs of Morphettville and Morphett Vale, Morphett Street in the Adelaide city centre, and the state electoral district of Morphett.

On 15 May 1838, John Morphett used his preliminary land order to buy 134 acres of land bounded by Pine Avenue, Anzac Highway and Morphett Road, near the present Morphettville race course. On 13 January 1840, he was granted title to the land which he named "Cummins Estate" after his mother's Devonshire farm. He kept sheep and cows, planted fruit trees, vines and olive groves, and cultivated a variety of local and imported trees. A horse lover, he also kept a stud and was involved in racing. (He was one of the original directors of the Morphettville Racing Club, founded in 1847).[2][7]

Morphett's home, Cummins House, was designed by architect George Kingston. It was sited on the Sturt River and begun in 1842 as a five roomed red brick cottage. It was extended considerably in 1854,[8] and there were further extensions in 1906, 1945, 1977 and 1983.[2][9] Five generations of the Morphett family lived in Cummins House until 1977, when it was acquired by the South Australian Government. The house's website contains picture galleries of the rooms inside the house,[10] the gardens, and of the house itself.[11]

In 1919, the first sub-division occurred when land south of the Glenelg-North Terrace Railway Line was sold for a new subdivision for returned servicemen's homes. In 1921, the area, which also included that part of Cummins Estate where Cummins House is located, was renamed to Novar Gardens to honour Viscount Novar, (who as Sir Ronald Munro Ferguson was the sixth Governor-General of Australia from 1914 to 1920). Hence, Cummins House is located at 23 Sheoak Avenue, Novar Gardens, South Australia.[12][13][14]

A large section of the property was purchased by Immanuel College in 1949.[15] The remaining 32 acres were held until 1963, when ~30 acres, often referred to as "Cummins Park", were sold for housing, leaving 1.68 acres containing the home and the outbuildings.[5]

The fourth generation owner, Hurtle Morphett, offered this residence and land for sale but a satisfactory purchaser was not forthcoming. To ensure that the home would be saved, the SA Government purchased the house on the remaining 1.68 acres in 1977.[5]

In 1982, Immanuel College leased Cummins from the State Government, with the aim of restoring the property for use as a pioneer museum, and as an exhibition and performance centre. The lease was for 5 years. With the assistance of the Cummins Society, the West Torrens Historical Society, and the National Trust, the school spent about $30,000 a year on the restoration of the house from an empty shell.[16] At the end of the lease period, the State government offered the lease to the West Torrens Council, who agreed to take charge of the property "under certain conditions".[17]

John was born on 4 May 1809 in London, England, the second son of Nathaniel and Mary, née Gliddon.[1]