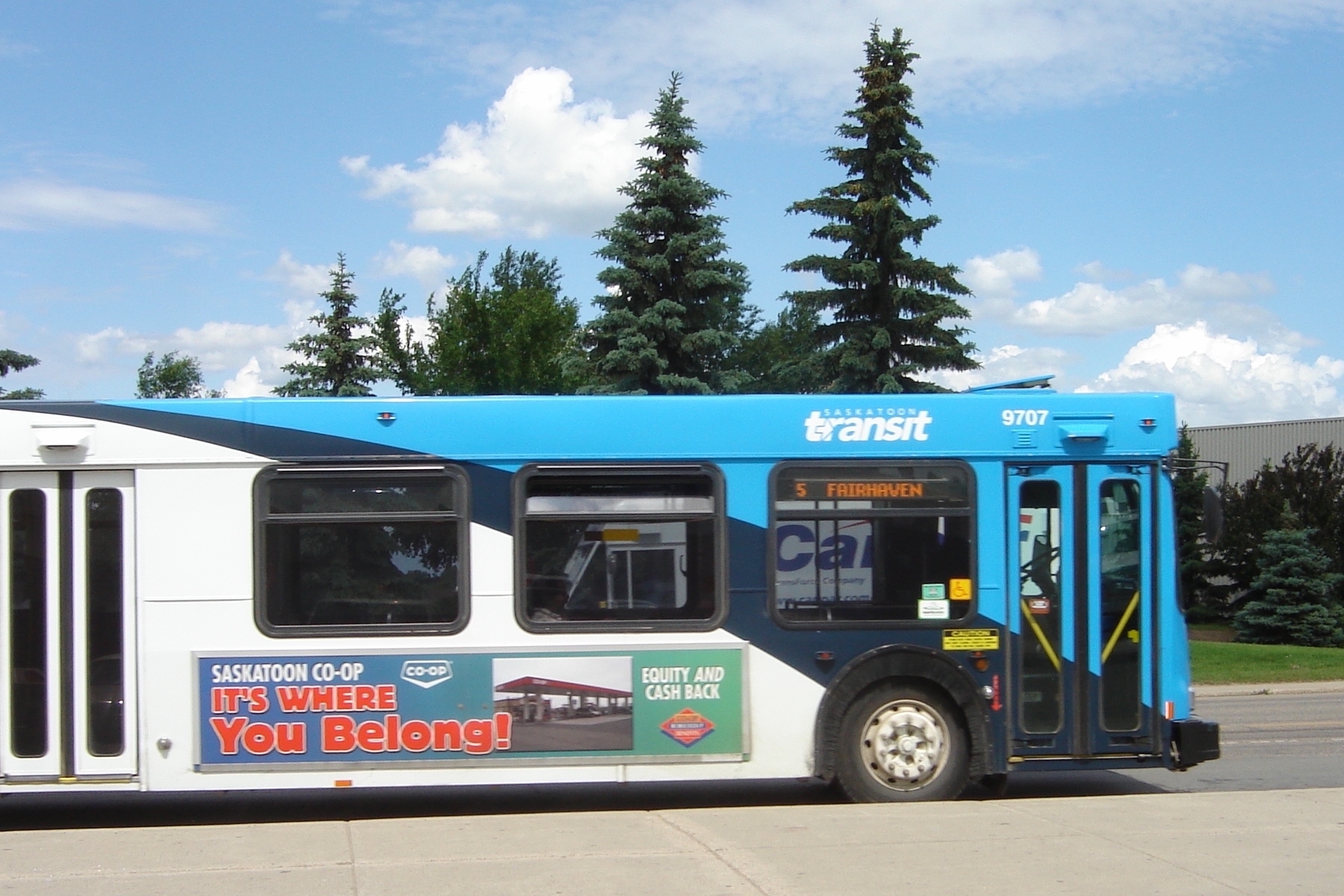 The central transfer point for most bus routes has always been the block of 23rd Street between 2nd and 3rd Avenues and the neighbouring corners on 2nd and 3rd Avenues. In 1984, this block was permanently closed to regular traffic and a "Transit Terminal" constructed, consisting of widened sidewalks, heated shelters, and angled curbs to provide three "bays" on each side of the block. The 23rd Street Transit Terminal was opened on , .

Although the official name is now Saskatoon Transit Services (as of 1998), it is generally known simply as "Saskatoon Transit", which is what appears on their Web page, logo, and all their brochures.

Two of the original Saskatoon streetcars are on display and being restored at the .

The main recommendations of the Short Term Plan were:

*A re-orientation of the current regular service network to better serve the and other key destinations.
*The introduction of higher-order [DART] service on four corridors interlined into two routes.
*A new bus terminal at Market Mall, and major improvements to the terminals downtown and at the University.

The routes in place prior to 2006 had not been substantially modified since the 1970s, and some since the 1950s, with the result that many neighbourhoods, particularly the newer suburbs, had poor service. Some areas such as Montgomery Place and Briarwood had no bus service at all on weekends. Many outlying neighbourhoods (e.g., Dundonald, Silverspring, Briarwood) had "stub routes" that deposited riders at a suburban mall transfer point, necessitating a transfer, and often two or three, to get anywhere in the city. Post-secondary institutions were under-served relative to the number of students using the buses; SIAST Kelsey Campus had only one major route serving it, so that trips to SIAST from most places in Saskatoon involved a transfer onto an overcrowded bus. Due to extreme congestion at the , several routes bypassed the campus altogether, forcing students to cross College Drive on foot. Service to the airport was nonexistent, and service to industrial areas was extremely poor. Demand in these areas was also extremely low, at least in part due to the poor service.

The Market Mall terminal has been built, and a temporary terminal with car traffic prohibited has been built at the University, pending a longer-term solution. Work has yet to begin on improving or relocating the downtown terminal.

The Long Term Plan is a 10-year plan that focuses on the infrastructure needed to maintain the improvements to the system implemented in the Short Term Plan and expansion needed to keep up with the expected increases in ridership that the improvements will generate. Issues include staffing, fleet replacement, refurbishing older buses, maintenance, new technologies such as emissions reduction and "smart" fare collection. Critical items include:

*Rejuvenating the fleet. The industry standard is to replace buses on an 18-year cycle; by this standard, Saskatoon Transit's fleet is quite old. The plan recommends replacing 6 buses a year through 2010, and 7 buses a year for the remaining years of the plan, as well as expanding the fleet by 12 buses.
*New transit garage. The current transit garage is too small for the fleet and surrounded by residential properties that make it undesirable if not impossible to expand the facility. A satellite facility or entirely new facility in a different location, probably an industrial park, is recommended within the next 5 years.
*More bus shelters. The plan recommends a target number of 215 bus shelters (30% of stops), or 22 per year over the course of the plan, up from 3 or 4 per year that are currently installed. This would include shelters at all DART stops, perhaps of a distinctive design.
*Fare technology. A review of fare collection options, and in particular smart card technology, should be undertaken within a year.
*Transit-oriented development. Work with urban planners to design neighbourhoods that work with public transit and discourage use of private vehicles.
*Signal priority and queue-jump lanes. Allow buses to avoid congestion by "turning the lights green" for them, and providing bus-only lanes where needed, for instance at the approaches to University Bridge.

Starting in September 2007, undergraduate students will pay a mandatory $59/term fee that turns their student card into a transit pass (the Universal Bus Pass or U-PASS). The held a referendum in February 2007, and the motion passed with 59% of voters approving.

The most visible and immediate of the 2005 Strategic Plan Study was the complete overhaul of bus routes effective , . The new routes provide generally better service overall; however, quite a few areas have seen lower service levels, particularly older central neighbourhoods that used to have numerous redundant routes. This has resulted in inconveniences for many passengers, especially those who had used the system for a long time.

Service is now more evenly distributed throughout the city. Nearly every bus [Effective , , Route 13 no longer goes to the downtown terminal, but still goes to the University Terminal. This means that one would have to transfer twice to get from Route 13 to the peak-hours-only Route 22. With every other pair of routes, a direct transfer is possible at some point.] now goes to the downtown terminal, substantially reducing the number of transfers. 90% of Saskatoon has access to the without needing to transfer, and peak service to the University is roughly doubled (57 buses/hour versus 33); SIAST Kelsey Campus is now served by a DART route as well as three other bus routes. The route changes have resulted in an increase of 2.3% in service hours (6,600 additional hours) with no additional buses or operating costs; part of this is the improved efficiency of the new routes, and part is due to additional service in off-peak hours.

A number of the new routes have been modified since the introduction date; prior to September 2007, most of these have been minor routing changes to improve service to very specific areas. The following more substantial changes were implemented effective , :

* On weekdays, Route 12 now serves CN Industrial and the new Stonebridge development; this new southward section ends at Market Mall. On weekends, Route 12 does not serve this section.
* Route 13 no longer serves the downtown terminal; instead, it provides direct service to the University from Exhibition. It also continues to run during the midday time slot.
* Route 20 has been eliminated altogether, having been mostly replaced by an extended Route 12.
* Route 21 now runs eastbound during the midday time slot as well as the afternoon peak. Both directions now serve an additional loop around University Heights Suburban Centre.

The DART routes are the flagship of the new service. The four DART routes interline in the central sections to form two corridors with extremely frequent service. Along this portion of their routes, bus stops are widely spaced to increase speed, and there are "express" sections on each route with no stops for over a kilometre. The interlined routes 50/60 run from to The Centre via downtown and the , and routes 70/80 run from to the University Heights Suburban Centre via SIAST, downtown and the University. The routes continue past these points, each serving a residential loop at either end (a total of 8 loops). 27

There are 12 non-DART bus routes. Although the buses serving these routes are generally older, about a third of the non-DART buses are now low-floor, including 20 acquired in 2007 and 2008. Most have a blue livery to contrast with the DART buses.

The 10 regular routes are numbered 1&ndash;6 and 11&ndash;14. These routes provide comprehensive geographical coverage of every area of the city, except for the areas served by the DART residential loops. They are slower than their DART counterparts, with more frequent stops and less frequent service. All the routes meet downtown, except Route 13. All the single-digit routes except Route 2 also meet at the University, along with Route 13. The single-digit routes mainly serve residential areas, while the double-digit routes serve a mixture of residential and industrial areas.

Routes 21 and 22 are specialty routes that provide additional service for commuters. They only operate in one direction at a time&mdash;toward downtown during the morning , and away from downtown at other times (midday and afternoon peak for Route 21; afternoon peak only for Route 22). Route 21 serves Forest Grove and the northern half of Sutherland, and Route 22 serves Fairhaven and Parkridge.

NOTES: DART bus frequency is half the above on non-interlined parts of the routes. Routes 21 and 22 provide peak-direction service only (towards downtown during morning peak, away from downtown at other times).

The names next to each route number are used on the "curtains" that display route information on the front of each bus.

Some buses change their route number at their termini, which is advertised in the bus pamphlets as a "stay-in-seat transfer". The list of these "transfers" is as follows:

Until about 1975, the Saskatchewan Council for Crippled Children and Adults (SCCCA) operated a 'contract' service that provided transportation for children and young adults who were physically challenged. These passengers were either attending school or a training center. Many persons with similar physical limitations had no access to transportation services, and began to put pressure on the SCCCA to extend the service to accommodate the general population. This would be a phone-in service, dispatchers were needed. Two buses were provided for this purpose, with the City of Saskatoon and the Province of Sask. providing funding for the service. The SCCCA continued to operate the service. In time, with a name change to the Sask. Abilities Council, the operation of 'Special Needs Transportation' continued until the end of 1998. In 1999, the Special Needs Transportation AdvisoryCommittee was created for the purpose of determining public needs and direction for the City of Saskatoon. [cite web
last =
first =
authorlink =
coauthors =

For some time prior to this date, the Board of Directors of the SAC were urging discontinuation of Public Transportation. After all, the SAC was a non-profit organization. The City of Saskatoon was advised several months in advance of this decision. A company called First Bus was therefore contracted to provide Public Transportation. [cite web
last =
first =
authorlink =
coauthors =
title = October 2003 ACCESSability Newsletter (PDF)
work = City of Saskatoon · Departments · Utility Services · Transit Services · Access Transit
publisher =
date =
url = http://www.saskatoon.ca/org/transit/pdfs/access_ability_no2_vol2.pdf
format =
doi =
accessdate = 2008-08-08] After 5 years, the City of Saskatoon took over the service completely, making it a part of the regular Transit System. The buses are equipped with lifts for wheelchairs, and a tie-down system. [cite web
last =
first =
authorlink =
coauthors =
title = City of Saskatoon · Departments · Utility Services · Transit Services · Access Transit
work =
publisher =
date =
url = http://www.saskatoon.ca/org/transit/access_transit.asp
format =
doi =
accessdate =2008-08-08 ] Several buses are in operation - a computer system aids dispatchers in putting rides together in such a way that the buses are not wasting unused time. It is a door-to-door service. The service is available to anyone who had difficulty accessing regular transportation. Passengers must be registered. Access Transit in Saskatoon has been used as a model for other cities in Canada and the United States. It is a service which has provided independence to many residents.