The New Zealand Liberal Party is generally regarded as having been the first real political party in New Zealand. It governed from 1891 until 1912. Out of office, the Liberals gradually found themselves pressed between the conservative Reform Party and the growing Labour Party. The Liberals fragmented in the 1920s, and the remnants of the Liberal Party eventually merged with Reform in 1936 to establish the modern National Party. Some MPs who tended to be more socially liberal than economically liberal joined Labour.

Prior to the establishment of the Liberal Party, MPs were all independent, although often grouped themselves into loose factions. Some of these factions were occasionally referred to as "parties", but were vague and ill-defined. In the history of Parliament, factions were formed around a number of different views — at one time, centralism and provincialism were the basis of factions, while at another time, factions were based on geographical region. Towards the 1880s, however, factions had gradually become stabilised along lines of liberalism and conservatism, although the line between the two was by no means certain.

The key figure in the establishment of the Liberal Party was John Ballance. Ballance, an MP, had served in a number of liberal-orientated governments, and had held office in posts such as Treasurer, Minister of Defence, and Minister of Native Affairs. He had a well-established reputation as a liberal, and was known for supporting land reform, women's suffrage, and Māori rights.

During the last term in power of Harry Atkinson, a conservative, Ballance began to organise the liberal-aligned opposition into a more united movement, and was officially named Leader of the Opposition in July 1889. In the 1890 elections, Ballance led his liberal faction to victory, and early in the new year, became Premier. Ballance and his allies, recognising the benefit that they had gained from their unity, set about building a permanent organisation. The Liberal Party, with common policies and a well-defined leadership, was proclaimed. A national party organisation (called the Liberal Federation) was established, with supporters of the new party encouraged to become members and help organise party activities — this was a new development in New Zealand, as previously, parliamentary factions existed only as loose groupings of politicians, not as public organisations.

The Liberal Party drew its support from two basic sources — the cities, and small farmers. In the cities, the Liberals were supported particularly strongly by workers and labourers, but also by the more socially progressive members of the middle class. In the countryside, the Liberals won support from those farmers who lacked the ability to compete with the large runholders, who monopolised the most of the available land. Both groups saw themselves as being mistreated and oppressed by what had been described as New Zealand's "early colonial gentry" — the well-educated and aristocratic land-owners and commercial magnates. It was this group that most strongly opposed the Liberal Party, denouncing its policies as an attempt by the unsuccessful to rob the prosperous.

In power, the Liberals enacted a large number of reforms. This was made possible by their unity — previously, reforms had stalled due to the need for long and complex negotiations to win support from individual MPs. Among the changes introduced were land reforms, progressive taxes on land and income, and legislation to improve the working conditions of urban labourers. Many of the Liberal Party's policies were decried as "socialist" by its opponents, but there is debate over whether this label is valid. William Pember Reeves, a Liberal Party politician and theorist, said that while the party supported an active role for the state, particularly in social matters, it did not in any way seek to discourage or inhibit private enterprise. Many historians have claimed that the Liberal Party's policies were based more on pragmatism than on ideology, although politicians such as Ballance and Reeves definitely had theories behind their actions.

In 1893, John Ballance died unexpectedly, leaving the Liberal Party's leadership open. It is believed that Ballance wished Robert Stout, a colleague known for his liberal views, to succeed him, but in the end, the leadership passed to Richard Seddon. Although Seddon went on to become New Zealand's longest serving Prime Minister, he was not as highly regarded by the Liberal Party as he was by the public. In particular, Seddon's social views were more conservative than those of Ballance or Stout, and he was seen by many as having a controlling and autocratic style of management. Seddon had originally assumed the leadership on an interim basis, with a full caucus vote intended for later, but no vote was ever held. Stout and his liberal colleagues challenged this, but were unsuccessful — although many in the party were uneasy about Seddon's views, Seddon himself was charismatic, and it was correctly predicted that he would win considerable support from the public.

An early clash between the Liberal Party's two wings came over the issue of women's suffrage. Ballance had been a strong supporter of the suffrage movement, having proclaimed his belief in the "absolute equality of the sexes", but Seddon was opposed. Considerable bitterness arose over the matter, with Stout and his allies strongly promoting suffrage despite Seddon's hostility. In the end, the pro-suffrage MPs were able to get enough support to pass the measure despite their leader actively campaigning against it.

In other matters, however, Seddon was more closely aligned with Ballance's original vision. Many of the party's earlier reforms were strengthened. William Pember Reeves, now the party's foremost theorist, promoted a number of other similar reforms. Seddon also introduced a number of new welfare and pension measures, sometimes compared to those of the British Liberal Party under Herbert Henry Asquith in the United Kingdom. These measures eventually formed the basis on which the Labour Party's Michael Joseph Savage built his welfare state. Seddon was extremely popular with ordinary New Zealanders, and under his particular brand of populism, the Liberal Party established itself as the dominant party of New Zealand politics.

In 1899 the Liberal and Labour Federation was formed to select candidates approved by the party leadership and ensure that they promoted a consistent and approved set of policies. Candidate selection was ultimately determined by Seddon. The Federation was New Zealand's first national party political organisation, and had most of the features of a modern political party, including subscribing members, a central council and an annual conference.[1] 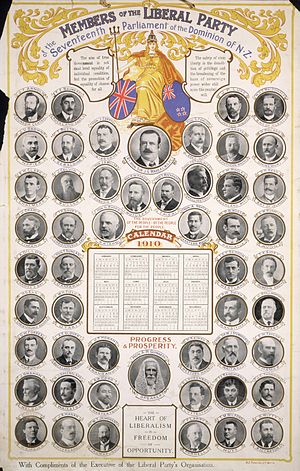 Slowly, however, the Liberal Party's dominance began to erode. The "reforming fires" of the party, the basis of its original success, were dying, and there was little innovation in the field of policy. In 1896, a splinter group formed the Radical Party, to advocate more "advanced" policies than Seddon's. In 1905, a similar group formed the New Liberal Party to push for more "progressive" policies, but this group was defunct by the time of the next election in 1908.

In 1906, Seddon died. Joseph Ward, his replacement (after a period of stewardship by William Hall-Jones), did not have the same charismatic flair. Increasingly, the Liberals found themselves losing support on two fronts — farmers, having obtained their goal of land reform, were gradually drifting to the conservative opposition, and workers, having become dissatisfied at the slowed pace of reform, were beginning to talk of an independent labour party.

The Liberals were aware of the problem facing them, and attempted to counter it. As early as 1899, Seddon had founded the "Liberal and Labour Federation", an attempt to relaunch Ballance's old Liberal Federation with more support from workers. Later, Joseph Ward declared a "holiday" from socially progressive legislation, halting any changes that might drive away conservatives. The party also introduced runoff voting (second ballot), hoping to reduce the chances of labour-aligned candidates from splitting the non-conservative vote, but this only applied in the 1908 and 1911 elections, being repealed in 1913.

In 1909, the conservative opposition (led by William Massey) established the Reform Party, a united organisation to challenge the Liberals. At the same time, the first noteworthy labour-orientated parties were appearing, saying that the Liberals were no longer able to provide the reforms that workers needed. The Liberal Party found itself torn between its two primary constituencies, unable to satisfy both. This coincided with a gradual decline in the organisational standards of the Liberal Party, with the situation having reached the point where in some cases, multiple "Liberal" candidates were contesting the same electoral race.

In the 1911 elections, the Liberal Party won four fewer seats than the Reform Party, but managed to remain in power with the support of some labour-aligned MPs and independents. In 1912, Sir Joseph Ward stepped down and was replaced by Thomas Mackenzie, who defeated George Laurenson by 22 votes to 9 (John A. Millar did not stand in this leadership ballot on 22 March). In July, coupled with the defection of some Liberal MPs like Millar, this arrangement collapsed, and twenty-one years of Liberal Party government came to an end.

The Liberals adopted a number of new policies in an attempt to win back votes, including an increase in land tax (supported by the labour movement) and the introduction of proportional representation. However, the foundation of the Labour Party in 1916 deprived the Liberals of any significant backing from workers, and the business world, concerned at Labour's rise, was uniting behind Reform's "anti-socialism" platform. The Liberal Party was accused by Labour of being a party of the elite, and by Reform of having socialist sympathies — between the two, many predicted that the Liberals would continue to decline. Several leadership changes — back to Ward in mid-1912, to William MacDonald and then Thomas Wilford in 1920, and to George William Forbes in 1925 — failed to revive the party's fortunes, and in June 1926, the Liberals were overtaken as the second-largest party by Labour.

Gradually, the Liberal Party's organisation decayed to the point of collapse. In 1927, a faction of the Liberal Party formed a new organisation, which was eventually named the United Party. To the considerable surprise of most observers, including many members of the party itself, United won a considerable victory, and formed a government in 1928. Later, United would reluctantly merge with Reform to counter the Labour Party. The result of this merger, the National Party, remains prominent in New Zealand politics today.