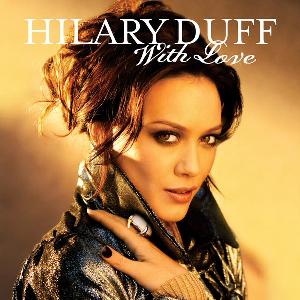 "With Love" is a song written by , and , released as the second U.S. single and the first non-U.S. single from Duff's third studio album, "Dignity" (2007). It features heavy elements of and , in contrast to most of Duff's previous material, and it is a about a relationship in which one party appreciates criticism and advice from the other.

"With Love" received a positive review from Chuck Taylor of "Billboard", who stated that the song "serves to reinvent the appealing singer as a boogie diva. It's a daring approach, and one that sets Hils apart from so many acts homogenizing the pop airwaves."

In the , a week before its release, "With Love" debuted at number sixty on the singles chart. The song reached number twenty-nine the following week, then due to heavy downloads, the song went to peak at No. 4, Entering the Top 5; becoming Duff's highest peaking song there. The single performed less well than most of Duff's previous singles in , reaching number twenty-two.

The "With Love" was directed by and doubles as the television commercial for Duff's fragrance .

Matthew Rolston said that he was asked to incorporate an element of intrigue and open-endedness into the commercial that could serve as a cross-reference to other facets of the With Love... Hilary Duff promotional campaign.

The video begins with Duff receiving a for a performance. She goes backstage, where her entourage hands her a bag, coat and hat. A man (played by

In playlist, "With Love"'s video is still there after more than a year.

producers and , and , Josh Harris (under his alias "Big Woodie") and have each ed "With Love".

A hip hop remix of "With Love", the remix, premiered on and features rapper ; [ [http://www.mixmatters.com/hot/2007/Hilary_Duff_With_Love.html "Hilary Duff feat. Play-n-Skillz with Slim Thug "With Love" remix"] . mixmatters.com. Retrieved .] it was released to U.S. radio stations on a . [ [http://eil.com/shop/moreinfo.asp?catalogid=410504 "With Love - US - CD-R acetate - Promo"] . eil.com.] Speaking with "Complex Magazine", Thug said that he had wanted to expand his horizons with his participation in the remix:

These are the formats and track listings of major single releases of "With Love". ;Promotional CD+DVD single [ [http://cgi.ebay.ca/Very-Rare-HILARY-DUFF-Single-CD-DVD-PRO-With-Love_W0QQitemZ110090917475QQihZ001QQcategoryZ307QQssPageNameZWDVWQQrdZ1QQcmdZViewItem Radio Promotional CD+DVD] . Retrieved , .]
#"With Love"
#"With Love" (video)