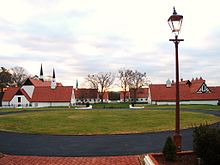 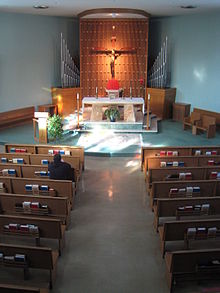 The meaning of a spiritual retreat can be different for different religious communities. Spiritual Retreats are an integral part of many Buddhist, Christian and Sufi (Islamic) communities.

In Buddhism, retreats are seen by some as integral for reconnection to one's self.

Retreats are also popular in Christian churches, and were established in today's form by St. Ignatius of Loyola (1491-1556), in his Spiritual Exercises. Ignatius was later to be made patron saint of spiritual retreats by Pope Pius XI in 1922. Many Protestants, Catholics and Orthodox Christians partake in and organise spiritual retreats each year.

Meditative retreats are an important practice in Sufism, the mystical path of Islam. The Sufi teacher Ibn Arabi's book Journey to the Lord of Power (Risālat al-Anwār)[1] is a guide to the inner journey that was published over 700 years ago.

A retreat can either be a time of solitude or a community experience. Some retreats are held in silence, and on others there may be a great deal of conversation, depending on the understanding and accepted practices of the host facility and/or the participant(s). Retreats are often conducted at rural or remote locations, either privately, or at a retreat centre such as a monastery. Some retreats for advanced practitioners may be undertaken in darkness, a form of retreat that is common as an advanced Dzogchen practice in the Nyingma school of Tibetan Buddhism.

Spiritual retreats allow time for reflection, prayer, or meditation. They are considered essential in Buddhism,[2] having been a common practice since the Vassa, or rainy season retreat, was established by the founder of Buddhism, Gotama Buddha. In Zen Buddhism retreats are known as sesshin.

The Christian retreat can be defined in the most simplest of terms as a definite time (from a few hours in length to a month) spent away from one's normal life for the purpose of reconnecting, usually in prayer, with God. Although the practice of leaving one's everyday life to connect on a deeper level with God, be that in the desert (as with the Desert Fathers), or in a monastery, is as old as Christianity itself, the practice of spending a specific time away with God is a more modern phenomenon, dating from the 1520s and St. Ignatius of Loyola's composition of the Spiritual Exercises.[3]

The Retreat was popularised in Roman Catholicism by the Society of Jesus (Jesuits), whose founder, St. Ignatius of Loyola, as a layman began, in the 1520s, directing others in making (participating in) the exercises.[4] Another form the Exercises came in, which became known as the nineteenth "Observation", 'allowed continuing one's ordinary occupations with the proviso of setting aside a few hours a day for this special purpose.'[5] The spiritual exercises were intended for people wanting to live closer to God's will for their life.

In the 20th Century, three day retreats were popularised by the Cursillo movement, based on Ignatian spirituality.

Followig the growth of Cursillo, similar retreats have become a part of other denominations, either using licensed Cursillo material or independent material loosely based on its concepts, leading to the development of the three day movement.

The literal meaning of khalwa is seclusion or retreat, but it has a different connotation in Sufi terminology: It is the act of total self-abandonment in desire for the Divine Presence. In complete seclusion, the Sufi continuously repeats the name of God as a highest form of dhikr (remembrance of God meditation). In his book, Journey to the Lord of Power, Muhiyid-Did ibn Arabi (1165-1240 A.D.) discussed the stages through which the Sufi passes in his khalwa.

Ibn Arabi suggested: "The Sufi should shut his door against the world for forty days and occupy himself with remembrance of Allah, that is to keep repeating, "Allah, Allah..." Then, "Almighty God will spread before him the degrees of the kingdom as a test. First, He will discover the secrets of the mineral world. If he occupies himself with dthikr, He (God) will unveil to the secrets of the vegetable world, then the secrets of the animal world, then the infusion of the world of life-force into lives, then the "surface sign" (the light of the Divine Names, according to Abdul-Karim al-Jeeli, the book's translator), then the degrees of speculative sciences, then the world of formation and adornment and beauty, then the degrees of the qutb (the soul or pivot of the universe-see #16) (59) Then he will be given the divine wisdom and the power of symbols and authority over the veil and the unveiling. The degree of the Divine Presence is made clear to him, the garden (of Eden) and Hell are revealed to him, then the original forms of the son of Adam, the Throne of Mercy. If it is appropriate, he will know his destination. Then he will reveal to him the Pen, the First Intellect (as it is called by Sufi philosophers), then the Mover of the Pen, the right hand of the Truth. (The "Truth" as defined by al-Jeeli is that by which everything is created, none other than God most High.) (60)

The practice of khalwah is regularly followed by the Sufis, with the permission and the supervision of a Sufi authority.

The Sufis base the assigning of forty days of khalwa period on the forty days Allah had appointed for Musa (Moses) as a fasting period before speaking to him, as mentioned in different chapters in the Qur'an. One of them is from surat al-Baqarah.