A selection of sushi from Bar Masa in Las Vegas.

Masa (雅?) is a Japanese and sushi restaurant in New York City's Time Warner Center.[1] The restaurant was opened by Chef Masa Takayama in 2004 and is considered one of the most expensive restaurants in the world. Located next door to the restaurant is Bar Masa, a less expensive and more accessible restaurant containing much of the same food found at Masa. In 2009, a second Bar Masa opened inside Aria in Las Vegas, Nevada.

The menu is Omakase only and a dinner costs between $350–600 per person, not including tip, tax or drinks.[2][3] The sushi bar itself is a $60,000 piece of rare hinoki wood from Japan. There is only one seating each for dinner and lunch. Reservations for the 26 available seats are taken three weeks in advance.[4] Chef Masa prepares the menu himself, often including seasonal ingredients. He uses many exotic ingredients, such as truffles and Kobe beef. Most of the fish is flown in from Japan. Chef Masa can be seen working behind the bar and will sometimes serve the food as well.[5] While there is no menu to order from, Chef Masa does keep a record of what he has served to his customers and what their reactions were.

Masa garnered the Michelin Guide's highest rating starting with the 2009 guide and was the first Japanese restaurant in the U.S. to do so.[6][7] It is one of only seven current restaurants in New York City awarded the maximum four out of four stars by The New York Times.[8] It has also received five out of five stars in the Forbes Travel Guide (formerly known as the Mobil Guide).[9] It has been named as one of New York's Top 50 by Travel + Leisure.[10] Forbes named Masa as the Most Expensive Restaurant In The U.S. for 2005 through 2009[11] as well as The World's Most Expensive Sushi in 2007 through 2009.[12] 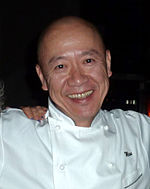 Masa Takayama was born and raised in Japan. After high school, he worked at Tokyo's famous Sushiko in Ginza. In 1980, he moved to Los Angeles, where he would eventually open his own Ginza Sushiko. After almost 20 years, and after having established Ginza Sushiko as one of the most expensive restaurants in Los Angeles at an average meal price of $105 per person,[13] he sold his restaurant to his sous-chef and moved to New York to open Masa and later Bar Masa in both New York and Las Vegas.[14] He would continue further to open his second restaurant in Las Vegas in 2009.