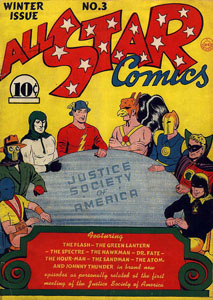 The original concept for All Star Comics was an anthology title containing the most popular series from the other titles published by both All-American Publications and National Comics. "All Star Comics" #1 contains primarily superhero stories including All-American's Golden Age Flash, , , National's , the Spectre and the Sandman, plus the adventure strip "Biff Bronson" and the comedy-adventure "Red, White and Blue". The title premiered with a Summer 1940 .

Issue #3 (Winter 1940/41) is of historical significance for depicting the first meeting of the Justice Society, at which its members swap stories of their exploits, subsequently depicted in the book's array of solo adventures. In addition to the Flash, Hawkman, Hour-Man, the Spectre, and the Sandman were , from National's "", and and the Atom from All-American's flagship title, "". The Justice Society was originally a to present an anthology of solo stories about the individual characters. Different chapters of the JSA's stories would often be handled by different artists. This new format proved to be so successful that the individual adventures were dropped and the heroes started teaming up to fight crime.

Issue #8 of this title (December, 1941) is notable in the history of superhero comics for the first appearance and introduction of in an 8-page insert story written by under the pen name of "Charles Moulton", with art by Harry G. Peter. The insert story was included as a backup story in the issue to test reader interest in the Wonder Woman concept. The "Wonder Woman" story generated enough positive fan response that Wonder Woman would be awarded the lead feature in the anthology title starting from issue #1. Wonder Woman would also appear in "All Star Comics" starting from issue #11 as a member of the Justice Society.

"All Star Comics" increased its frequency from a quarterly to a bimonthly publication schedule, and the JSA lasted through #57 (March 1951) — ironically, a story titled "The Mystery of the Vanishing Detectives". Superhero comics slumped in the early 1950s, and "All Star Comics" became "All Star Western" from #58-119 (in 1961) with Western heroes replacing the Justice Society.

In 1976 the name "All Star Comics" was resurrected for a series portraying the modern-day adventures of the JSA. This new series ignored the numbering from "All-Star Western" and continued the original numbering, premiering with "All-Star Comics" #58. Starting in issue #66, a hyphen was added to the title and the words "All-Star Comics" became a much smaller part of the cover while the words "Justice Society" became much larger. This series ran for seventeen issues before it was abruptly cancelled as part of the and the JSA's adventures were folded into . The 1970s series introduced the new characters, and the Helena Wayne version of the Huntress. Furthermore, the 1970s series was the first regular series set on DC's alternate continuity, . Despite the cancellation of the series, it generated enough interest to spawn two other series set on Earth-Two, and .

The entire original series has been reprinted as hardback volumes in the "DC Archives" series as "All Star Comics Archives" Vol. 0-11. The first nine issues of the 1970's revival of the series, "All-Star Comics" #58-67, were collected in the trade paperback, "Justice Society" Vol. 1 published in August 2006. A second volume with the rest of the 70's stories, "All-Star Comics" #68-74, was released in February 2007.