"All-Star Western" was the name of two American series published by , each a omnibus featuring both continuing characters and stories. The first ran from 1951 to 1961, the second from 1970 to 1972. 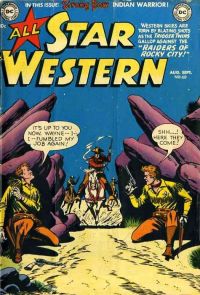 The original "All-Star Western" began with #58 (May 1951), having taken over the number of its predecessor title, "" — a omnibus that years before had introduced the enduring team the . With the postwar decline in the popularity of superheroes, publisher changed the series format and title. "All-Star Western" ran 62 bimonthly issues through #119 (July 1961). The cover logo did not include a hyphen until issue #108 (Sept. 1959), when it was much reduced in size and placed above the much larger logo for what was then the title feature, "". Johnny Thunder remained on the cover until the final issue, #119, occasionally sharing it with Madame .44, "the masked outlaw queen." 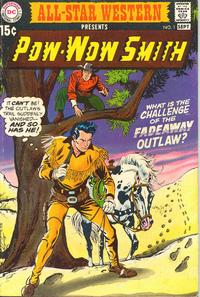 The series was revived in the following decade, and ran 11 bimonthly issues (Sept. 1970 - May 1972) before changing its title and, slightly its format to become "". "All-Star Western" vol. 2, #1 starred , scripted by , with art by . The next four starred the characters Outlaw and El Diablo. With issue #5, the character Outlaw was dropped, with the cover logo "Outlaw" now referring to the replacement-feature star, . The Western "all-stars" now included such historical characters as , and , in a mix of new stories and reprints, as well as DC stalwarts Pow-Wow Smith, El Diablo and .