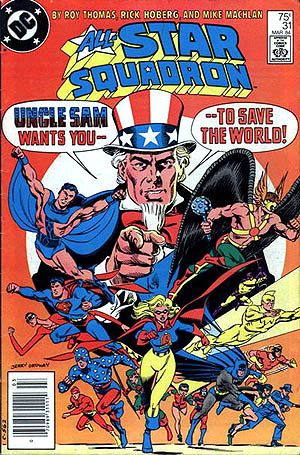 "All-Star Squadron" #1 contains "An Open Letter to the Readers" written by Roy Thomas. In it he describes the impetus for the series, namely, DC wanted a comic book telling tales of the Justice Society of America. The last series to do so was All Star Comics, which lasted only seventeen issues, ending in 1979. As Roy Thomas put it, DC management gave him "a chance to write a return of the JSA." Instead of writing stories in the modern era, however, Roy Thomas decided to place the tales during World War Two. The setting would be DC's fictional world of Earth-Two, established during the 1960s. The cast of characters, however, would include a large ensemble of heroes from both the DC stable and the Group (which had been purchased by DC). With so many characters to choose from, the creative team decided to concentrate on "quite promising characters who have been ignored or underplayed for years," instead of those Earth-Two characters who had counterparts on Earth-One. Roy Thomas writes, "If we lost the original GL, we gained the Earth-Two Robotman; if we dropped Jay (Flash) Garrick, we picked up on Johnny Quick; Liberty Belle could stand in for till more super-powered ladies came along. We even tossed in an Earth-Two version of the venerable , whose series in ADVENTURE was just folding..." The All-Star Squadron was an example of "retroactive continuity" or "", as it rewrote the already-established history of DC superheroes that had been published during the 1940s. The first known use of the term "retcon" was by Roy Thomas in the letter column of "All-Star Squadron" #20 (April, 1983). Several story lines ironed out continuity errors (and quite a few were created), fleshed out characters' origins and rewrote earlier stories to jibe with later established continuity.

The and , actual structures constructed in for the , housed the Squadron's headquarters. The All-Star Squadron had a ic butler named Gernsback, who was based on the robots from the fair and was named after science fiction publisher .

Originally, the All-Star Squadron was supposed to exist on "Earth-Two", a parallel world used by DC as the venue for stories occurring during the 1940s, and including heroes only published during that era as well as the early versions of characters still published up to the present day such as Batman and Superman (the contemporary versions of those characters existed on "Earth-One"). After the 1985 DC Comics event "" merged the parallel worlds into one continuity, the duplicate superhero versions were eliminated. The All-Star Squadron was then itself retconned and left only with the characters unique to that time period, so that Superman, Batman & Robin, Wonder Woman and Aquaman were not alive at that point in history, and were thus never Squadron members. This was accomplished by cancelling it after #67 and replacing it with a successor series, "".

In a nod to the original JSA adventures in "", writer Roy Thomas tried to include at least a cameo appearance by the golden-age Hawkman in every issue, since Hawkman was the one hero to appear in every golden-age issue of "All Star", including the two pre-JSA issues. Unfortunately, the artwork for issue #49 was printed without Hawkman's cameo included, so it became the only issue to break the streak. The string of appearances, however, had already been broken several issues into a mid-70s revival of "All Star Comics", numbering and all.

The book chronicled the adventures of a large team of es, including members of the , Freedom Fighters, and , as well as a small number of solo heroes. The premise was that, on the day of the bombing of , President gathered available superheroes at the White House and asked them to work together to battle sabotage and keep the peace on the home front during . At the time, many of the Justice Society members had been captured by the villain , but the available heroes were asked to first guard against a potential attack on the American West Coast. Degaton himself used some stolen Japanese planes to launch such an attack, so the new Squadron's first major mission was to stop the attack and rescue the captured heroes, who also became part of the new group. The rationale for not using the Squadron in combat situations in the European or Pacific Theaters of War was that had possession of the , a mystical object that gave him control of any superheroes with magic-based powers or a vulnerability to magic (including Superman, Green Lantern, , and others) who crossed into territory held by the . America's entry into World War II caused several of the members of the JSA to enlist, or be drafted in their civilian identities. These included Starman, , The Atom, and .