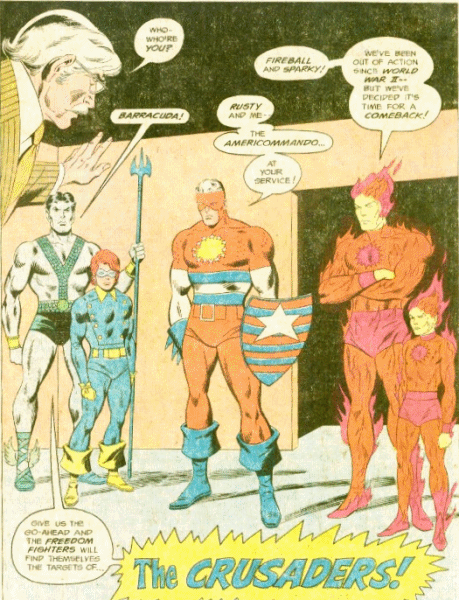 The Crusaders is the name used by two teams of es, one group appearing in and the other in , at around the same time as part of an informal crossover. The DC Comics team was created by Bob Rozakis and Dick Ayers in the pages of "Freedom Fighters" #7 March (). The Marvel Comics version of the Crusaders first appeared in "Invaders" #14, written by and drawn by .

Various other comic book superhero teams have also been named "The Crusaders".

Both Crusader teams were based in related characters, both were empowered and led by villains, and both appeared in stories published in . Each team was a of the other company's team, creating an informal . [ [http://goodcomics.comicbookresources.com/2006/09/21/comic-book-urban-legends-revealed-69/ Comics Should Be Good! » Comic Book Urban Legends Revealed #69 ] ]

These were neither the first nor the last pastiche superhero teams to appear. Both Marvel's Avengers and DC's Justice League of America had encountered duplicates of the other team in their own title in the form of (in "Avengers") and the (in "Justice League of America"). A similar trick would later be used to cross the Teen Titans over with the , using the (in Teen Titans) and (in DNAgents). During the 1970s, there was also a series of annual unofficial crossovers between Marvel and DC set around the Rutland Halloween Parade, which was hosted by comics fan Tom Fagan.

The Crusaders were a al team of superheroes appearing in comic books on Earth One during World War II.

The Crusaders appeared "for real" on Earth One during the 1970's, offering their services to District Attorney David Pearson to help capture the Freedom Fighters, who were at that time fugitives because they were believed to have been working with the villainous Silver Ghost. Pearson gave the Crusaders the authority to pursue Uncle Sam and his group after a report that they had caused a blackout in upstate New York. [http://obscure.dcuguide.com/crusaders.htm]

After a lengthy fight, at the end of which the Crusaders are defeated, the Freedom Fighters ask the Crusaders how they became the comic book heroes of World War Two. The group revealed that the Americommando had approached a group of young comic book collectors at a convention (Marvin, Lennie, Arch, and Roy) and had offered to recreate them as his former teammates, using a special device to transform them into their superpowered identities. [http://obscure.dcuguide.com/crusaders.htm]

Meanwhile, the others had caught up to the Americommando and Martha. The villain dropped Martha, but the Ray was able to save her. He left Martha with Doll Man and headed off after the Americommando. The Ray again caught up with him, and the sky battle between them burned off the Americommando's mask, revealing him to indeed be the Silver Ghost. The fight also attracted the attention of some state trooper helicopters, which swooped in to arrest both of them. The Ray accidentally hits one of the helicopters with an energy blast, prompting the Troopers to open fire. The Ray was wounded and fell to Earth. The Silver Ghost gloats and leaves him to die. [http://obscure.dcuguide.com/crusaders.htm]

The Ray was later rescued by Rod Reilly, the Golden Age Firebrand who had emigrated to Earth-1some time prior to the Freedom Fighters.

The Crusaders fought among themselves until finally, after being deserted by the Americommando, they reveal their origins. They disappeared at the end of the story and there was no sign that they have lost their powers, but they never appear again. There was never an explanation of how the Silver Ghost gained super-strength or developed the to turn comic fans into superheroes. [http://obscure.dcuguide.com/crusaders.htm]

This team shows up in wartime London and routs the crew of a crashed German , convincing the British that they finally have a team of supermen to rival the Invaders. An eccentric cab driver named Alfie seems to be their boss. It is later revealed that he gave most of them the devices that grant them their powers and can turn their powers off with a switch on his belt. [http://obscure.dcuguide.com/crusaders.htm]

Dyna-Mite (Roger Aubrey), who has no memory of where he came from, becomes suspicious. He spies on Alfie and discovers that he is a tool of the Nazis and is using them in a plot to assassinate the king. Alfie, meanwhile, has convinced the other Crusaders that the Invaders (, , Torch, Toro, ) are traitors. Eventually Dyna-Mite warns the Invaders, and they rush to the scene to stop the king's murder, the Crusaders naturally assume that they are being attacked and a fight ensues. [http://obscure.dcuguide.com/crusaders.htm]

Eventually, the truth is revealed. Alfie flees but is killed when the Torch's fireball causes his taxi to go off a bridge into the water. Now that they were powerless, most of the Crusaders retire on the spot. [http://obscure.dcuguide.com/crusaders.htm]

Only two of these Crusaders remain active, the Spirit of '76 took over as the new Captain America when Steve Rogers got frozen. But after the war, Nasland was later killed in a fight with some robots of the evil android called Adam 1. Dyna-Mite turned out to be the lover of Brian Falsworth, who was the original Mighty Destroyer and later Union Jack II. He was restored to his normal size and succeeded Falsworth as the Mighty Destroyer. [http://obscure.dcuguide.com/crusaders.htm]

The names of the DC team are actually taken from obscure Golden Age superheroes.

Updated versions of Americommando and Barracuda have since apperead in the miniseries "Uncle Sam and the Freedom Fighters" 2006-2007, as part of the team called First Strike. However, it's doubtful that their pre-Crisis history is still canonical.

In " and the Extremists" Barracuda and Americommando are also members of Earth-8's Meta-Militia, an updated version of the .

In the 2007-2008 "Uncle Sam" series, a new team of Crusaders, gathered and controlled by the government, were introduced:

In Marvel stories featuring the Invaders, the Spirit of '76 later went on to be retconned into having been the man behind the Captain America mask in several post WWII, pre-Silver Age comics before dying later in What If#4, and the Dyna-Mite assumed the identity of the Destroyer.