DC Archive Editions, collect early, sometimes rare, comic books published by DC and other publishers into a permanent hardcover series. With more than 100 titles, this series began in 1989 with Superman Archives Vol. 1. Most of the restoration work to make the pages suitable for quality printing has been done by Rick Keene who has restored more than 2500 pages.[1] 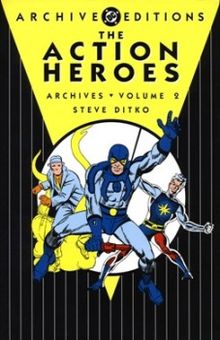 The books span DC's Golden, Silver and Bronze Age as well as titles not originally published by DC such as Will Eisner's The Spirit, Wally Wood's T.H.U.N.D.E.R. Agents, and the Fawcett and Charlton lines of super heroes as well as Mad magazine and Elfquest. The DC Archives provide a dual service in that they not only preserve DC's history but provide readers with stories that normally would not be available to them at an affordable cost. When the line first started, the cover price for an Archive was $39.95 US. However, from the early 1990s up to the present, the standard cover price for a DC Archive is $49.99 US (although some books in the line have cost much more, depending on how much content is collected, thus a larger page count & higher cover price). As of 2009[update], new volumes released have a cover price of $59.99 US.

It was widely believed that the DC Archive Editions would cease publication in 2008.[2] However, in an issue of the publication Comic Shop News (issue #1080, February 27, 2008), an update was given regarding the DC Archive Editions during an announcement regarding DC's collected editions schedule: "In spite of earlier reports of their demise, DC Archives will continue in 2008 and 2009, although in reduced numbers, focusing on continuing already-established Archives series."[citation needed] The numbers have since decreased from 14 volumes released in 2007, to 7 released in 2008, 6 in 2009, 4 in 2010, and at least 1 in 2011.

Since most of the volumes are priced at $49.99 or higher, many fans have complained that the series is too expensive. More recently the comics have been reprinted again in the trade paperback Chronicles series, which offers most of the issues at a lower price.