Mark Strong (born Marco Giuseppe Salussolia; 30 August 1963) is an English actor, with a body of work in both films and television. He has performed in films as varied as Body of Lies, Syriana, The Young Victoria, Sherlock Holmes, RocknRolla, Stardust, and Kick-Ass. He often depicts villains or antagonists, such as Lord Blackwood in Sherlock Holmes, Prince Septimus in Stardust, Frank D'Amico in Kick-Ass, and Sir Godfrey in Robin Hood.

Strong was born Marco Giuseppe Salussolia in London, to an Italian father and an Austrian mother.[1] His father left the family soon after his birth, and he was raised by his mother, who worked as an au pair. His English name is not a stage name; it was changed by deed poll by his mother when he was a boy to help him fit in with his peers.[2] He was baptized a Catholic, though, according to The Guardian, "it has never meant anything to him".[3] He speaks fluent German and some Italian.[4][5] Strong attended Wymondham College in Norfolk. His original ambition was to become a lawyer, but after studying for a year at University in Munich, Germany he decided to change his direction in life and returned home to London.[6] He knows[clarification needed] Gerard Butler who also originally intended to be a lawyer before they were both actors. Later they co-starred in RocknRolla. In London, he studied English and Drama at Royal Holloway, and later attended Bristol Old Vic Theatre School.[7][8] 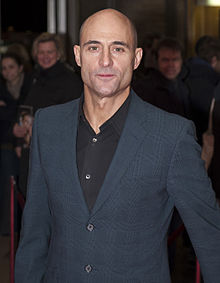 Strong is a familiar face on British television. He appeared in two Prime Suspect serials for ITV as Inspector (later Detective Chief Superintendent) Larry Hall, in Prime Suspect 3 (1993) and Prime Suspect 6 (2003). He also had starring roles in two BBC Two drama serials, Our Friends in the North (1996) and The Long Firm (2004) for which he earned a BAFTA nomination. He also played the villainous Colonel Brand in Sharpe's Mission (1996). He played the romantic lead, Mr. Knightley, in the ITV adaptation of Jane Austen's novel Emma, with Kate Beckinsale in the title role.

In feature films, one of Strong's roles was Steve in the 1997 adaptation of Nick Hornby's Fever Pitch, opposite Colin Firth, and Strong was also featured in Roman Polanski's Oliver Twist (2005). He played Mussawi in the film Syriana, and in 2005 appeared in Revolver, where he played Sorter, a nerveless, steely assassin "who never misses". In 2006, Strong portrayed the traitorous Wictred in Tristan & Isolde, showing his talent with swordplay. The following year he played Pinbacker in the science-fiction film Sunshine. He had to spend six hours a day in the makeup chair to create the character's facial scars. Coincidentally, Strong appeared in a 1999 film also entitled Sunshine.

He was one of the last two actors considered for the part of Anton Chigurh (Javier Bardem's role) in No Country for Old Men, despite the persistence of rumours he was never offered the part.[9] In Body of Lies, he played Hani Salaam, head of Jordanian Intelligence. In most of Strong's films he is virtually unrecognizable because he changes his look for each character; in Stardust and Tristan + Isolde, he has long hair, in RocknRolla and The Long Firm he sports a receding hairline, in Kick-Ass he is completely bald, in Body of Lies and Miss Pettigrew Lives for a Day he has a full head of hair, and in Sunshine he was subjected to hours of make-up to create the antagonist Pinbacker. His characters in Low Winter Sun, Heartlands and Fever Pitch, however, most resemble his true self.

In his theatre career, Strong was nominated in 2003 for the Laurence Olivier Award for Best Performance in a Supporting Role for his role in Shakespeare's Twelfth Night at the Donmar Warehouse in 2002. He has a lead part in the Channel 4 film Endgame (2009).[10]

Since 2006, Strong has provided the narration in the BBC genealogy series Who Do You Think You Are?.

Strong lives in north-west London with his wife Liza Marshall and sons Gabriel and Roman (born October 5, 2007).[12][13] He is a longtime friend of actor Daniel Craig, who is the godfather of Strong's younger son Roman.